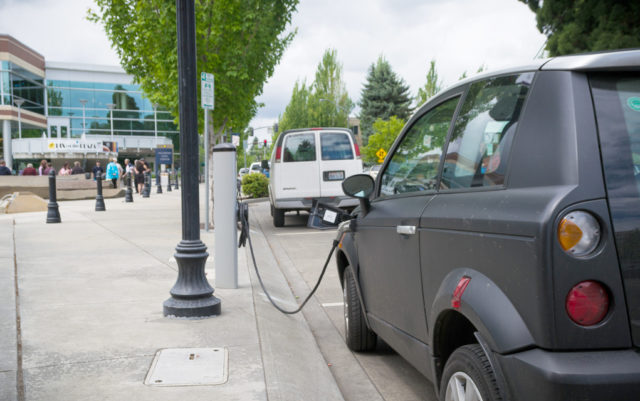 Public opinion polls tend to show Americans overwhelmingly think electric vehicles (EVs) are better for the environment. A new study, led by the U.K. financial analysis nonprofit Carbon Tracker Initiative, suggests widespread adoption of EVs could be the most significant variable in disruption of oil demand. In fact, the study found EVs could cause oil demand to peak sometime in the late 2020s.

In the fight against climate change, this could be significant, as transportation accounted for more nationwide greenhouse gas emissions (28 percent) than any other sector in 2016, according to the EPA. Within that, light-duty vehicles like personal cars, accounted for 60 percent of emissions. In Colorado, transportation is the second largest contributor to greenhouse gas emissions after the electric sector.

But in April, despite this information, the former head of the EPA Scott Pruitt announced his decision to revoke 2012 standards requiring cars and light trucks sold in the United States to average more than 50 miles per gallon by 2025, which could affect car companies’ decisions to pursue more EV models.

“Motor vehicles are a significant contributor to air pollution and climate change. As the federal government continues to roll back environmental protections to appease industry interests, it’s up to the states to take action,” said Maria Handley, acting executive director for Conservation Colorado in a press release. “Colorado can’t — and won’t — be left behind.”

“As we have so many times before, Colorado is leading the way in protecting our health and environment. The clean car standards will save us money at the gas pump, cut our greenhouse gas emissions, and give us cleaner air,” says Jace Woodrum, communications director at Conservation Colorado.

The Carbon Tracker study set out to dispel oil and gas industry claims that reduce the importance of EVs, and also to encourage investors to pay attention to the EV market’s potential growth. The number of EVs in the U.S. tripled from 2013 to 2015, for example, and then doubled from 2015 to 2017. Investors in the oil and gas industry in the U.S. continue to underestimate the threat of electric vehicles, which Carbon Tracker says will lead to them being “blindsided” by future domestic growth of the EV market. In the next decade, Carbon Tracker estimates that EVs could displace 2 million barrels per day of oil demand.

One of the main holdups in widespread EV adoption is the lack of charger availability. But at least one startup company is trying to solve that problem.

EVMatch is a mobile software developed by a team of environmentalists in California to match EV users with available charging stations in their area. After EVMatch won the Boulder Energy Challenge in April, the City of Boulder awarded the company a $50,000 grant.

EVMatch wants to make the lives of EV users easier by allowing them to search chargers by connector type, charging speed, availability and price.

“A vast majority of EV users just charge at home,” says the Boulder representative for EVMatch, William Truesdell. “EVMatch is the only platform that facilitates reservable charging. Many EV drivers have indicated how important this is so they can be confident that when they drive somewhere, they’ll be assured to have access to charging.”

The cost of EV batteries has dramatically decreased recently; some estimates say 60 percent in the last six years. They dropped 35 percent in 2015 alone, and EVMatch hopes that the increased availability of EVs combined with free access to the app will supply incentives to increase widespread use of electric vehicles or hybrids.

EVMatch is also using part of its grant money to fund $200 rebates for people that offer charging stations. This would cover about half of the price of a charging station, and Truesdell says that renting out these chargers will allow people to earn their money back in full.

If there is one takeaway from the Carbon Tracker study, it is that widespread adoption of EVs will likely be a key catalyst in decarbonization. EVMatch’s partnership with the City of Boulder is at least one step toward making that a reality.

“This will be opening up the door to more EV users,” Truesdell says. “Ideally, it will blow up so that it’s a large, very concentrated network of chargers, not just in the City of Boulder, but up and down the foothills.”