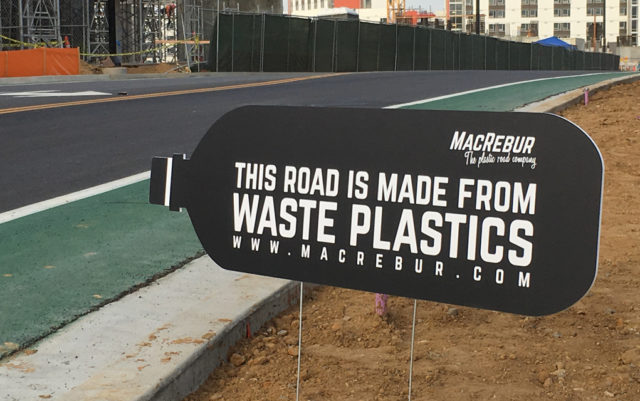 At the University of California, San Diego (UCSD) campus, there is a 250-foot stretch of road that’s unlike any other in the U.S. It’s made with asphalt that uses recycled plastic waste instead of conventional fossil fuel bitumen — and you probably wouldn’t even notice the difference if you were standing on it.

“It’s flat and black and smooth,” says Gary Oshima, the constructions commodity designer at UCSD. “If you happen to be an asphalt installer, there’s a little bit of a sheen on the asphalt they can notice, but no way that regular people would know the difference.”

The plastic asphalt offers a new way to reuse plastic waste, while reducing the replacement/maintenance costs of conventional roads by making them stronger.

The company that installed the UCSD road, MacRebur Plastic Road Company, claims that, “After years of tests and trials all over the world,” the method results in “enhanced and more durable roads” made from 100% plastic waste material that does not leach plastic or toxic fumes into the environment.

While places like the U.K. and the City of Los Angeles are enthusiastically pursuing pilot project programs for plastic roads, the Colorado Department of Transportation (CDOT) remains hesitant to adopt this new sustainable solution too quickly.

“CDOT is generally proactive with advancing new technology wherever possible with roadway construction,” Bob Wilson, a CDOT regional communications manager, says. “However, implementing new technology is risky especially when there are many unknowns in the field of plastic roads.”

Conventional asphalt is made from 95% aggregate (rocks, gravel and sand) and 5% bitumen (the tarry black “glue” that bonds it all together). MacRebur’s plastic asphalt uses that same recipe, only the bitumen is recycled plastic waste instead of a new petroleum product.

Currently, plastic roads are more expensive to build than conventional roads, at least for now, Oshima says. Once production of recycled plastic bitumen is domestic, the cost will likely go down, he says. But that isn’t the case yet.

Wilson also points to a number of other unknowns with the use of recycled plastic roads, including: the variability of plastic types and how that might affect the consistency of long-term use; unknown performance when it comes to cracking or rutting; a lack of construction guidelines; no long-term research on how temperature variances might affect durability or what impact studded tires and chains might have on the product

“Much of the early work with plastic roads has been in areas with nowhere near the severity in climatic changes as we have in Colorado,” Wilson says. “Cold temperature performance of any type of plastic road, or plastic modified asphalt would be essential for it to be a viable tool here in Colorado.”

Oshima acknowledges that the UCSD road has only been in place for a year and a half, which is not an adequate period to draw conclusions. But he points to MacRebur’s studies in Saudi Arabia and the U.K., where plastic asphalt has been used on motorways, roundabouts and airport runways for just over six years.

“So far, those roads have performed very well in both of those environments,” Oshima says. Both the colder, wetter environment of the U.K. and the hot and dry climate of the Middle East have proven suitable for plastic asphalt, he says.

Still, a six-year testing period really isn’t adequate to draw conclusions from either, according to Wilson. Most asphalt roads have a lifespan of 20 to 25 years, and the top layer is often milled and resurfaced only every 10 to 15 years — which is to say, the reality of plastic asphalt is that it still has a half decade of testing before conclusions can be drawn.

Still, Oshima maintains that the plastic road on the college campus in California has held up extremely well.

And while that might be true, for that particular road in that particular climate, CDOT will need a lot more convincing before it starts putting recycled plastic into Colorado’s roads.

As Wilson says, “For plastics in roadways to be a viable option, significant national and state specific research would need to be conducted regarding long-term performance before it is ready for widespread use.”

Considering the long lead time and the potential environmental benefits, perhaps now is the time to start testing plastic roads in Colorado.