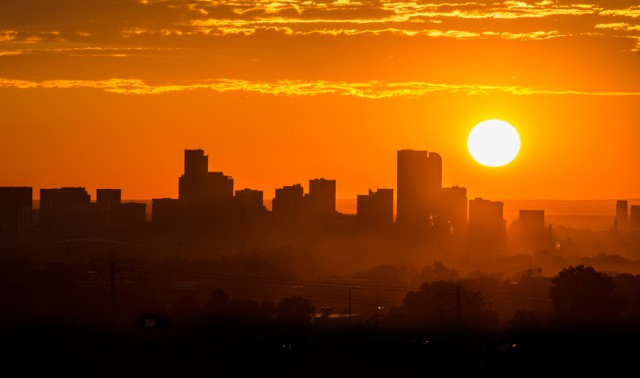 Stand by for long, hot North American summers of smarting eyes, tickling throats, asthma, bronchitis and emphysema. And crops could also suffer, because ground-level ozone pollution is likely to increase in the U.S.

Gabriele Pfister, an atmospheric scientist at the National Center for Atmosphere Research (NCAR), and research colleagues report in the Journal of Geophysical Research: Atmospheres that Americans face a rise of 70 percent in summertime ozone levels by 2050.

Ozone is a form of oxygen that, in the stratosphere, protects life by absorbing dangerous ultraviolet radiation from the sun, but at ground level it is a serious component of air pollution and urban smog.

Rising temperatures, and the attendant growth of short-lived greenhouse gases such as methane and oxides of nitrogen, could turn local atmospheres into a photochemical crucible that will spur a cascade of chemical reactions and lead to a higher incidence of ground-level ozone.

Almost all of the U.S. is likely to suffer at least a few days each year of unhealthy air. The big conur bations of the East, the Midwest and the West Coast could be choking and gasping for most of the summer.

“It doesn’t matter where you are in the United States — climate change has the potential to make your air worse,” says Pfister. “A warming planet doesn’t just mean rising temperatures. It means risking more summertime pollution, and the health impacts that come with it.”

She and her research colleagues looked at two possibilities. One is the notorious “business as usual” scenario, in which nitrogen oxides and volatile organic compounds from human industry go on as they have in the past. In the other, they assumed that humans would take action and cut emissions of these compounds.

In both scenarios, they allowed for more carbon dioxide emissions, and more significant warming. They used a new supercomputer to simulate pollution levels hour by hour for 39 hypothetical summers, under a range of meteorological conditions.

In the first option, they found that the number of eight-hour periods in which ozone would exceed 75 parts per billion — the threshold considered unhealthy by the U.S. Environmental Protection Agency — would increase on average by 70 percent across the U.S. by 2050.

In the second scenario, even with continued climate change, cases of ozone pollution would drop dramatically to less than 1 percent of the current experience.

“Reducing emissions of ozone precursors would have an enormous effect on the air we all breathe,” Pfister says.