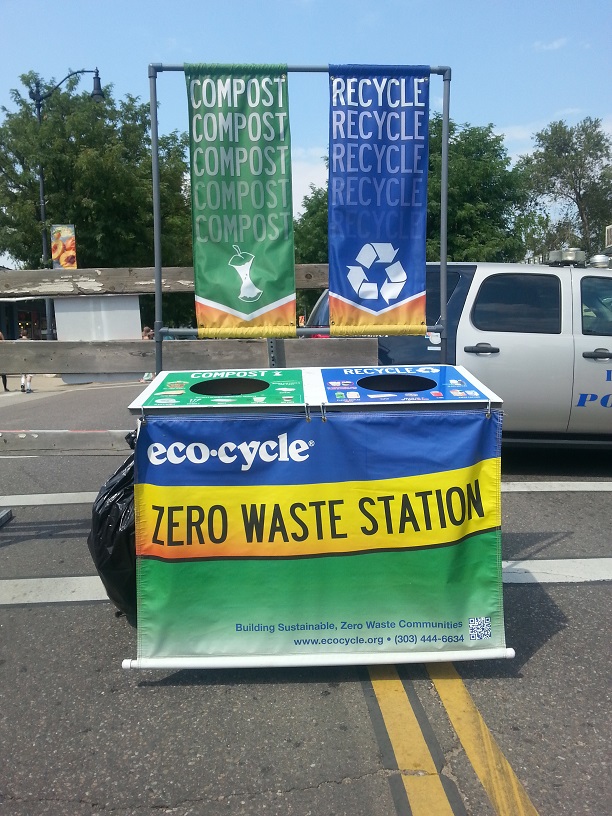 Emma Marie Devine, a sales associate at the Boulder shoe store Two Sole Sisters, held out an empty, plastic iced coffee cup. She and her coworker tried to decide if it could be recycled or if it should go in the trash.

“Does it have a number on it?” It did — the number one inside a small triangle on the bottom of the cup.

Recycle it then, they agreed.

The cup was tossed in a recycling bin underneath the checkout counter — its entrance into the Boulder waste stream.

Two years ago, Boulder was diverting 41 percent of the waste stream to be recycled or composted. In 2013, that number had decreased to 32 percent, according to the city of Boulder’s website, even though regulations make recycling as easy and inexpensive as possible for residents.

“It’s mostly because of the commercial sector,” says Jamie Harkins, a business sustainability specialist with the city of Boulder.  “Their proportion of the waste stream keeps getting bigger. And because it’s such a big part, it has a really big impact.”

Harkins says that the residential sector gets a little better at recycling every year, but not enough to offset the waste of local businesses that goes to landfills. And “residential” is still a little blurry — waste-hauling companies must offer separate recycling and composting pickup at an included cost for single family homes, but not apartment complexes. Some complexes have special recycling programs, but most do not.

The city’s Zero Waste initiative began officially in 2006, and Boulder is also home to one of the most comprehensive recycling and composting nonprofit organizations in the country: Eco-Cycle. The city and county work with Eco-Cycle, the university and waste hauling companies to implement regulations that reduce the amount of waste that is thrown in landfills.

But these programs aren’t enough so far, even for residential waste. Western Disposal, a local trash hauler, conducted a waste sort in spring 2012.

Truckload-sized samples from several Boulder neighborhoods were dumped on the ground outside Western’s transfer station in east Boulder. Volunteers sorted through the samples by hand and found compostable kitchen waste and recyclable material such as office paper, cardboard and beverage containers. And some of it was plastics, like Devine’s iced coffee cup. In Boulder, plastic cups do belong in the trash.

“You can recycle one through seven plastics, if it’s a bottle, a jug, a jar or a tub,” says Lisa Friend, sustainability planner with the city of Boulder. “It has to be that particular shape. If it’s a bag, a clamshell tray, a Bic pen, doesn’t matter. It’s not a bottle, jug, jar or tub.”

Devine’s plastic coffee cup was not any of those things. It was a cup. And the number on the bottom? Friend said that the plastic numbering identification has actually done more to confuse the recycling process than it has helped. There are more types of plastics than what the numbers one through seven represent, she says.

These technicalities are one thing preventing the town from reaching its goal of diverting 85 percent of the waste stream from landfills.

“There are all these little particulars about recycling,” says Jahnavi Stenflo, a senior administrative assistant and “director of happiness” at Pivotal Labs. “When you don’t know them, it’s really easy to contaminate your recycling.”

Pivotal Labs, a software company on Pearl Street, recently held a lunchtime workshop to teach employees about what can be recycled, how it should be recycled, what can be composted and what is actually trash.

The Pivotal Labs office shares its recycling dumpster with a few other neighboring businesses, and Stenflo says she has noticed that one of them, at least, sometimes puts the wrong things in the recycling bin — old pickles, hamburger buns, salad scraps and even plastic bags of trash.

“If they’re contaminating our recycling dumpster,” Stenflo says, “that means that what we’ve been doing all this time, those efforts are not necessarily able to meet their intended end, which is that things will be recycled.”

Currently, local businesses recycle on a volunteer basis. But with a waste diversion rate that is being negatively affected by some of those businesses, the city is expected to begin crafting regulations to require that businesses recycle and compost their waste. According to Harkins, the informal planning process to address potential commercial recycling regulations has begun. A stakeholders group is assembling that is expected to present to the City Council early in 2015.