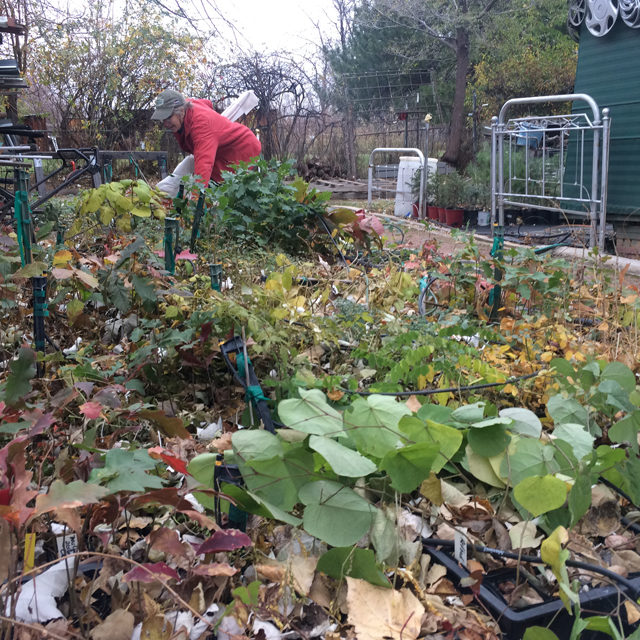 When Elizabeth Black was a kid growing up in Hawaii, she spent her days running without shoes between the banyan trees, sometimes as large as city blocks, letting alchemy turn the combination of nature and imagination into gold.

“We were let loose in the morning and you didn’t have to show up back at home until dinnertime,” Black says. “We had all these routes through peoples’ backyards, and there were certain places you just went and had adventures. So there were all these great trees that you knew about and you’d go and climb different trees and get fruit from different places and play these elaborate games.”

The tree has been an enduring symbol in Black’s life — from the big trunks and wide, low-lying banyan canopies of her childhood, to the native species in the Grand Canyon she used as firewood as a young adult while running river trips, to the variety of species she plants on her Boulder property today.

And she wants to share that friendship with you. Black, to date, has given away more than 5,000 trees she’s grown on her own property in North Boulder. The trees are of different varieties and are completely free for the taking — you may have seen her sign off Broadway and Violet, or spotted her ad online.

Trees, as we know from elementary school, provide a number of physical benefits to the Earth and our lives. And, indeed, Black says she started giving trees away after watching Al Gore’s An Inconvenient Truth and thinking “growing trees is something I can do” to help.

Realistically, Black admits, global warming is an issue we can’t plant-a-tree our way out of. But the real benefit of trees comes in the humble act of planting them, she says.

“I think part of our problem is that we’re so disconnected from the Earth. This is a really big problem,” Black says. “You know, if people just had to dig in the dirt a little bit more, it would be helpful.”

Black gets people working in the dirt by giving away seedlings that are about 2-3 years old. She first germinates seeds in a small bed over the winter, before transferring them to a small planter and then to a slightly larger planter when they grow big enough. In her backyard, she has a small Christmas tree farm (yes, she allows the cutting of 100 trees per year), a small garden from which she sells produce, the makeshift free tree nursery and an art studio — Black is an accomplished visual artist. A friendly cat guards the premises.

But growing anything in Colorado is tough, Black says, and she had to learn hard lessons on her way to being able to successfully produce the roughly 1,000 trees she gives away each year.

“I just killed an awful lot of things. I killed so many plants,” Black says about the time when she first started growing things in Colorado several decades ago. “People come here and say, ‘Yeah, I’m a gardener, and I’ve gardened for so many years in Pennsylvania or California.’ Well, big whoop, this is Colorado. It’s really different here. Yeah, I had gardens in California and Oregon, and I came here and I just killed things, you know?”

To blame for the difficulty is bad soil and a tough climate that shortens the growing season and often imperils fruits and seeds due to late and early frosts. Black says climate change, ironically, has actually helped moderate the climate in Colorado, but it still presents many challenges.

For instance, a late frost prevented Black from collecting redbud seeds to plant. Black collects and forages for seeds throughout Boulder to plant during the fall — her enterprise is so local that most trees don’t do well even for homeowners in the foothills, many of whom are eager to plant after fires and floods.

Black has no goal in mind for how many trees she hopes to give away, but she hopes, at least, the seedlings she doles out actually turn into trees. A 50-50 success rate would be a win.

“Generally the trees I give away are fairly tough,” Black says. “They’re easy to plant because they’re little. You can actually do it yourself, which is the point. I think that’s important that you do it yourself.”

Black typically has a big tree giveaway in May each year with smaller tree giveaways throughout the summer. For more information and dates of giveaways, visit neighborhoodchristmastreefarm.com.