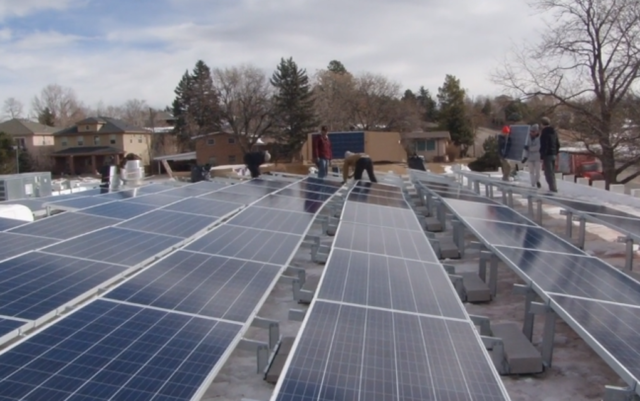 Stewardship of the Earth is a religious tenet of almost every faith. In Christianity, mankind was given care of the Garden of Eden to “dress it and to keep it.” Judaism provides scriptural protection for certain trees and has rules in Mishnah against harming the public domain. And in Islam, it is believed that God created the environment as a reflection of love and reality, as something that could teach humanity the profound truths of life.

However, sustainability is still not a widespread goal for most congregations in the U.S. In fact, most churches, no matter the denomination, inhabit large buildings largely reliant on fossil fuels for heating and lighting.

According to an analysis by the energy comparator Selectra, the average church uses about 22,000-30,000 kilowatt hours of electricity annually. That is two to three times the rate of electrical usage of the average American household.

But in Colorado, a coalition of five different faith-based organizations is working to change that. On April 11-12 this coalition will gather in Denver for the state’s first-ever Interfaith Green Building Conference.

The Interfaith Green Building Conference is largely a response to the 2018 report by the International Panel on Climate Change (IPCC), which warns that communities around the world need to make rapid and comprehensive changes within the next 12 years if we’re to limit global warming and preserve human health (and civilization at large).

Cosponsored by Colorado Interfaith Power and Light, Eco-Justice Ministries, the Jewish sustainability nonprofit Hazon, and First Universalist Church, the conference aims to empower congregations and other nonprofit organizations to set a responsible environmental example. This union of faith-based organizations is resolving to lead the charge towards sustainability, reduce their buildings’ carbon footprints, however possible, and spread the message of sustainability far and wide.

Attendees will not only have access to some delicious, locally sourced food, but they will also be learning from experts and other congregations that have already pursued renewables themselves, Abood explains.

“All of our cosponsors are very committed to reducing our impact,” Abood says. “We want to consider how do we mitigate climate change? Not just looking at limiting what we’re using, but also looking at sequestering carbon from the atmosphere.”

The goal is to encourage more churches and nonprofits to become net-zero operations, perhaps even net-positive, producing sustainable energy for the grid instead of consuming fossil fuel energy from it.

Dr. Scott Denning, a professor of atmospheric science at Colorado State University will give the conference’s keynote address on the April 11, with panel discussions and workshops continuing through the following day, covering a variety of topics from waste reduction, to energy conservation, sustainable energy options, carbon sequestration, implementation of the energy transition and more.

“This conference is really going to focus on the building itself, and how to motivate your congregation, how to get people on board and what some of the financing options are,” Abood says.

“This new building challenges us to live up to the goal of replacing carbon burning fuels with renewable energy sources,” Gary Norton, another member of First Universalist Church, says of the renovation. “Maybe 50 years from now, this building won’t seem like an end point but like a stepping stone.”

If every church in the U.S. strived toward carbon-neutrality, it could mean a significant reduction in carbon emissions. That goal represents a way for these churches to uphold the tenet of Earthly stewardship, and preserve the land we live on for future generations.

“It’s going to be a really great conference,” Abood says. “And it’s hopefully going to give a lot of congregations some good resources to move forward toward sustainability.”