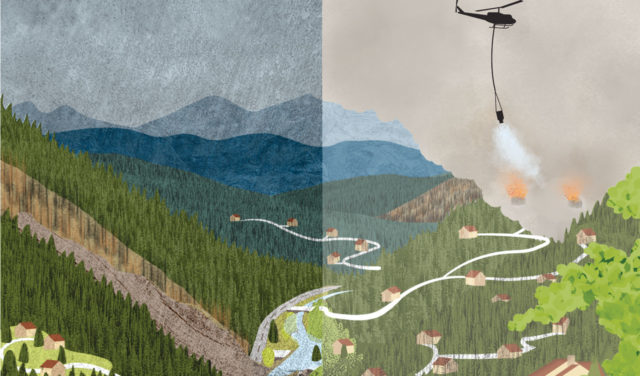 Historic floods. Severe drought. Record wildfires. Since the turn of the century, Colorado has experienced extreme weather events made worse by climate change, resulting in significant damages to people, property, infrastructure, industries and the environment. Policy-makers from local jurisdictions to state agencies are tasked with preparing the Centennial State for the future marked by such events, as it’s likely they will only become more frequent and more severe. But, until recently, it’s been difficult for governments to understand just how such hazards affect their bottom line.

Enter the Future Avoided Cost Explorer (FACE), an interactive web-based tool that allows decision-makers to explore the economic impacts of these hazards based on 2050 projections of both a warming climate and population growth. Initially seen as a pilot project, the tool came out of updating the state hazard mitigation plan, which identifies flood, drought and wildfires as the three main atmospheric hazards the state faces.

The tool seeks to quantify impacts of these hazards on local economies by translating increases in temperature and population growth into dollars and cents. The hope is that local governments will use this information to implement cost-saving mitigation plans at the local level, which every jurisdiction in the state is required to have in order to be eligible for state and federal mitigation funding.

“Regardless of who’s up top or who’s making decisions, people want to make responsible investments that see those dollars actually being effective to addressing the risk,” says Megan Holcomb, senior climate specialist for the Colorado Water Conservation Board (CWCB). “And this is just the baseline information to even be getting to have those conversations.”

The project is a joint effort between CWCB and Colorado Division of Homeland Security and Emergency Management (DHSEM), developed with grant funding from the Federal Emergency Management Agency (FEMA). It’s the first of its kind in the country — although other states are attempting to implement similar projects, the FACE tool will help inform those efforts.

“The reality is this is the first time we’ve been able to quantify the economic cost of climate change, and we’re hoping to take this data, begin to reflect it in local hazard mitigation plans and then define mitigation measures that will offset some of these costs,” says Steve Boand, state hazard and mitigation officer with DHSEM.

“This tool can also be used to show what are the costs of inaction if you just sit back and don’t do anything. We can tally it up, what it may look like,” adds Patricia Gavelda, program manager for FACE with DHSEM. “Not only here in Colorado, but across the country, some see the value of mitigation planning more than others, but this is another way to quote-unquote sell mitigation actions that can lead to resiliency.”

Using county-level data, FACE specifically looks at how the impacts from the three hazards are felt across seven different economic sectors: buildings, bridges, crops, cattle, skiing, rafting and suppression (wildfire). But the tool is also open source, which allows jurisdictions to mimic the project with other localized data.

“I think the biggest step for us initially was to just track down what information’s out there,” says Ryan Spies, a scientist with Lynker, a water resources consulting group based in Boulder, which helped develop the FACE tool.

In the agriculture sector, for example, the USDA has robust data sets that the creators were able to use. For other sectors, like rafting and skiing, they had to get a bit more creative to track down specific impact data, he says.

Considering total damages, the Front Range will be hardest hit, simply due to exposure: the people, livelihoods, infrastructure or economic assets that could be adversely affected by these hazards.

“Some of the exposure in the future is really driven by where people are going to live and where they’re going to work — continuing to grow in the floodplains or growing into the wildland-urban interface, as you imagine, increases your exposure more,” Spies says.

But breaking it down further, looking at these impacts on a per capita basis, that’s when “you start to see which counties, which regions of the state are really going to be hit hard from a local economic perspective,” he says. Rural counties that depend largely on agriculture, for example, could be especially susceptible to economic hardship due to drought.

For Boulder County, the tool shows that flooding could cost an additional $39 million under the high population growth (a 63% increase from current numbers) and more severe climate scenarios (an increase of 3 degrees Celsius in the summer.) Wildfires could cost an additional $41 million per year, and drought $14 million annually. Added all together, these hazards alone could cost Boulder County an estimated $94 million per year in estimated damages.

“So you put that in the context of what the County’s general fund is ($439.9 million for 2020) [and] about 40% of the annual budget of Boulder County would have to be refashioned in some way to address these concerns,” Boand says. Looking at it another way, it would be $450-$530 per year for each household, he says, approaching the annual cost of other utilities like a water bill.

The tool doesn’t translate data into specific recommendations for local areas, however. But it does give a picture of where cost savings could occur, and offers examples of actions local governments can initiate now to improve future community resilience.

“A lot of what our goal is with this project is to provide a resource, to have more conversations, more dialogue on understanding where we’re heading as far as climate change and population growth, and then what can we do about it,” Spies says. “We can paint a doom and gloom picture all day long, but I think where we really want the conversation to go is where and how and why do we need to devote resources to promoting resiliency and adaptation.”

ON THE BILL: FACE user demo. 10 a.m. Thursday, June 25, virtual. The event will be recorded and made available for later use. Visit the event page for more info.