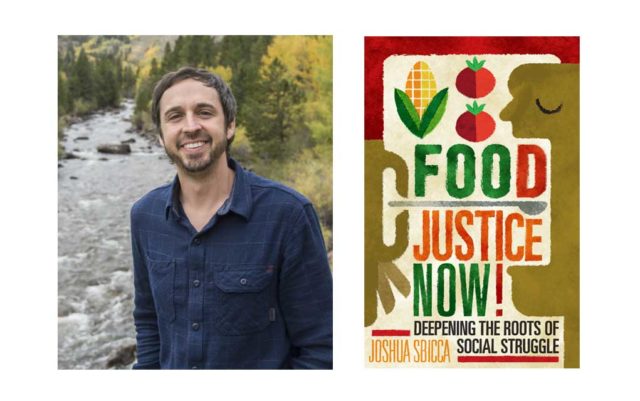 Seemingly every day Netflix adds a food documentary, another farmers’ market opens and more restaurants offer farm-to-table fare. While some obvious improvements are being made in the way society consumes food, author, sociologist and CSU professor Joshua Sbicca thinks there is room for more.

“There’s kind of this renaissance of wanting to reconnect to food and the process of how food comes to our table, but that’s come at a cost,” Sbicca says. “The cost is that there’s this fetishizing of food without paying attention to the social relations that make it all possible. There are deeply structured inequalities that even in better systems, like organic agriculture, are still imperfect and still might completely overlook the human dimensions of what’s going on.”

In his new book, Food Justice Now!, Sbicca pulls back the curtain to reveal the unbalanced dynamics in the food system while showing how food can be a building block in larger social movements. Sbicca spent roughly seven years researching and writing the book, with the goal of understanding the diversity of viewpoints and approaches to food justice. He worked with labor unions and food justice organizations, and he spent time along the U.S./Mexico border on organic farms. In the book, he connects food and issues like mass incarceration, labor disputes and immigration.

For Sbicca, food and justice are intertwined — an indication of societal inequality including exploitation of farm workers, corporate concentration and gender inequality in the division of household labor.

“The food system requires those inequalities to operate,” he says. “In that respect, justice is intimately related to questions like, ‘Are these the kinds of systems that we want?’”

Moreover, food is interconnected in the histories of these movements, Sbicca says. The Black Panther Party, for example, offered a free breakfast program for children that served its broader platform.

“The Black Panther Party was very explicit in anti-capitalism, anti-imperialism and anti-racism. They said these [food] programs were about survival pending revolution,” Sbicca says. “There’s a need to take care of people’s basic needs on the path to revolutionizing or at least structurally recreating a world that’s going to produce more equitable and just outcomes for people.”

In Food Justice Now!, Sbicca explores these connections even further by looking at modern programs, like the grassroots organization Planting Justice, based out of Oakland, California.

“They’ve seen a connection between the fact that the same working class, low-income communities that are going to be food insecure are also experiencing the detrimental impacts of mass incarceration,” he says.

Planting Justice members work with gardening programs inside San Quentin State Prison by offering horticultural therapy and vocational training. The organization has also helped prisoners upon release by creating living wage jobs through urban agricultural projects, including building gardens, landscaping, farming and running a tree nursery. While recidivism in California hovers between 55 and 65 percent, depending on the area, Planting Justice’s recidivism rate is 0 percent.

Creating a better future is possible, and Sbicca details three solutions in his book: collected power, diversity and solidarity. He wants better representation when it comes to creating food policies and more connection between social movements. He also hopes for a deeper understanding of the issues that address the root causes of food insecurity.

“That’s why it’s ‘Food Justice Now!’ with an exclamation point,” he says. “It’s a demand to really imagine food politics differently and engage in movement building and forms of activism that are capable of really restructuring the food system in a way where it works for everybody instead of just a select few.”