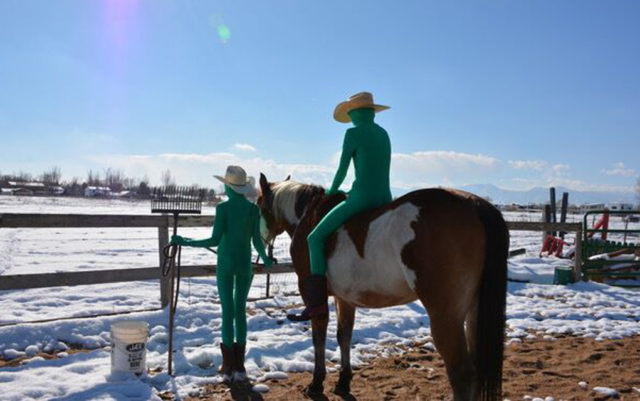 ‘Viewer of the Horizon,’ by Addison Burnsed, McKenzie Jones and Charlotte Helgans/ Courtesy of Marda Kirn

With each passing day, news about the state of the environment gets more alarming. As problems get worse, it’s easy to get disheartened, which is why University of Colorado theater and environmental studies professor Beth Osnes is trying a different tactic.

For Osnes, that comes in the form of a neon green spandex bodysuit. Now showing at NCAR through Sept. 30, Green Suits: Sustainability in Action in and around BVSD is a photography exhibit showcasing 80 photos from middle and high school students in the Boulder Valley School District (BVSD). The student photographers and their classmates donned green suits while exploring various topics connected to the environment. The exhibit is a joint effort between BVSD, EcoArts Connections, the UCAR Center for Science Education and Osnes’ Inside the Greenhouse project at CU.

Green Suits’ first iteration started several years ago when Osnes was performing in London and decided to grab a green suit from the costume department and head out on the streets to take some photos. Since then, her small afternoon of fun has expanded into an extensive photo project promoting sustainability throughout the globe, with pictures from all seven continents.

“It really just started because it brought me joy. It was fun and whimsical,” she says. “It also communicated this vitality that I think we need to bring to the issue so people want to engage with it.”

For the NCAR exhibit, students were tasked with creating a photo in the categories of energy, food, nature, transportation and waste. Students in green suits can be seen recycling, riding bikes, buying local produce and calling attention to energy inefficiencies like Christmas lights or our ever-increasing love affair with fossil fuels.

The photos were judged by a panel of photographers and environmental experts, who then chose the first-place photo and bestowed the James Balog award, named for nature photographer behind Chasing Ice, an award-winning climate change documentary. The winning photo was created by Centaurus High School students Michael Marquardt, Jesse Perez and Charley Sagrillo and it shows a green-suited figure splayed out in the middle of a solar panel field. It was taken from 100 feet in the air by drone.

For Marquardt, the picture invokes the aliveness of the sustainable energy process.

Many of the photos move the focus from the problems plaguing the environment toward solutions. It’s an intentional shift. Osnes says focusing on solutions is one of the most effective strategies for creating change.

Another important factor in the exhibit is the young photographers themselves. Students were asked to use their creativity to both produce an interesting piece of art as well as highlight innovative approaches to sustainability. Student photographers volunteered youthful insights like suggesting skateboards and horses as a means for greener transportation. They also pointed to shortcomings in today’s science fields like the lack of women researchers.

“They’re not as much of the authors of the society’s status quo, so they can see outside of it perhaps,” Osnes says about the students. “They’re willing to suggest preposterous ideas, and we need that right now. … They’re going to be writing those policies and coming up with those technologies sooner than we think. So to get them in on the [process] now is really an important thing to do.”

The project has helped stoke discussion in Marquardt’s class, he says, and Green Suits has helped deepen his interest in the environment.

Ever since she started the photo series, Osnes has enjoyed the delight it brings to audiences. That levity is essential for moving forward.

“There’s a lot of depressing news and a lot of loss occurring when you work in environmental causes, so you have to sustain hope and maintain joy,” she says. “You have to be intentional about doing that. … Times can seem dismal, but [this exhibit] can help feed hope. We’re still in there doing outrageous things to make a difference.”

ON THE BILL: Green Suits: Sustainability in Action in and around BVSD photography exhibit.NCAR, 1850 Table Mesa Drive, Boulder. Through Sept. 30.