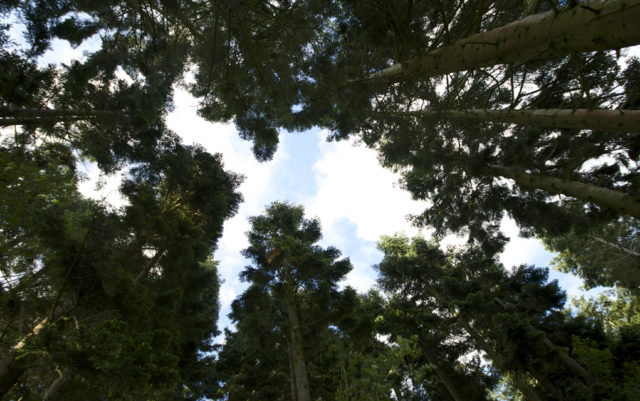 Jeremy Altdorfer’s day of delivery was hectic, but successful.

All day on Saturday, Oct. 5 he was zipping around Boulder in his car, which was loaded to the brim with white pine saplings; making one delivery after the next, dropping off the baby trees wherever they’d been requested. Meanwhile, his brother and other partners from Experience Dental, opening Oct. 30, were doling out more trees at several different locations throughout the county.

Their goal: to plant 1,000 trees in Boulder County in a day. Or, at least, to give out 1,000 ready-to-plant trees to individuals, businesses and schools that wanted and needed them. In part, Altdorfer wants to reduce his own business’ carbon footprint, and in part, he wants to help save Boulder’s threatened canopy of trees.

Altdorfer’s 1,000 white pines are going to help offset what the City of Boulder is calling the “Tree Crisis of 2019.” Boulder’s trees are currently under threat, and while the City’s forestry department plants about 500 new ash trees a year, Altdorfer’s contribution of 1,000 white pines in a single day is a welcome offering and a much-needed addition.

According to Alexander, Boulder is projected to lose some 70,000 ash trees to the emerald ash tree borer (EAB), an invasive insect from Asia, over the next 10 years. By 2035, she says, the EAB could destroy 25 percent of Boulder’s urban tree canopy.

Having an assorted mix of tree species around the City and throughout Boulder County means the urban canopy is less vulnerable to any one stressor.

White pines are good options because they grow fast, they grow large (so they sequester a lot of carbon) and they aren’t at risk from EAB.

But that doesn’t mean pines are totally safe in Boulder. They can also come under stress from increasingly erratic and extreme weather events. Things like droughts, dramatic temperature swings, heavy snows and high winds are becoming more common with climate destabilization and can all take a serious toll on a tree.

The City’s forestry department manages some 51,000 trees throughout town, and there’s thousands more maintained privately in yards, on farms, ranches and other properties that extend out into the county. While the exact amount of carbon each one of those trees sequesters is different based on size and species, pine plantations can sequester between 2.4 and 7.3 tons of carbon per acre per year, according to the Center for International Earth Science Information Network.

While Boulder County does not have the pine density of a pine plantation, even with a moderate density of trees, the arboreal carbon sequestration capacity of the area is huge.

Which is another big motivator behind Altdorfer’s 1,000 tree initiative, he says. He hopes to make Experience Dental a carbon neutral (maybe even carbon negative) operation someday. This was his first step toward that goal, he says, but there’s many more to come.

“We’re going to dedicate a tree to every patient we get next spring,” Altdorfer says. He also plans on making this Experience Dental tree-planting-extravaganza an annual thing. Next year, though, they want to go even bigger.

We looked for some of the hottest places in California. We found climate injustice in a nutshell.