Turn on any channel and you’re quick to find a crime show, be it Criminal Minds, Law & Order: Special Victims Unit, Bones or one of the four versions of CSI: Crime Scene Investigation.

With practically any case resolved in 45 minutes, it’s not surprising the viewer is often left with a skewed perception of what it actually takes to solve a crime. It’s not quite as precise in reality.

“[On TV, a medical examiner] says the time of death, ‘They died at 12:15.’ Yeah right. If there was a witness, then yes. Or maybe if [the victim’s] watch stopped,” says physiologist David O. Norris with a laugh. “You rarely have that. It’s usually plus or minus several hours.”

While the process isn’t as simple as it looks on TV, there’s still much that can be done. For more than 30 years, Norris and his partner Jane Bock have used botany to help solve criminal cases across the country. With their latest book, Forensic Plant Science, they hope to expand the reach of their practices and show investigators some basic, yet helpful techniques that anyone can use. The book details the methods of using plant ecology and anatomy to gain clues, and it includes examples and stories from Norris and Bock’s career.

The two met as professors at the University of Colorado Boulder and were chosen to teach freshman biology together. Norris was an endocrinologist and Bock a plant ecologist. They wanted to work together but didn’t know how to incorporate both of their backgrounds.

Then in the early ’80s, the duo was sought out by a Colorado coroner to assist in a homicide case. The victim’s last known meal was with her boyfriend at McDonald’s, but by further analyzing the stomach contents, Bock and Norris identified the victim’s final meal was a salad with a variety of items, none of which would have been found at McDonald’s at that time. The evidence helped to clear the boyfriend as the prime suspect. The case remained open until a serial killer was arrested years later and confessed to a series of murders, including this particular case. The killer indicated her last meal was with him at Wendy’s, which had a salad bar in those days.

Since then, Norris and Bock have worked on roughly 50 cases, including homicides, assaults and robberies, even high profile ones like JonBenét Ramsey in which they were asked to look at intestinal contents and wood fragments that were potentially linked to the crime scene.

Botany can contribute a variety of evidence and information to investigators. By analyzing cell structure you can differentiate between plants. For example, an apple’s cells have a different structure than that of a garbanzo bean. In one rape-homicide case, Bock and Norris compared fecal samples of the victim and suspect. By finding similar food fragments in both samples, the evidence suggested the suspect had been at the crime scene, which later led to his conviction in the case. 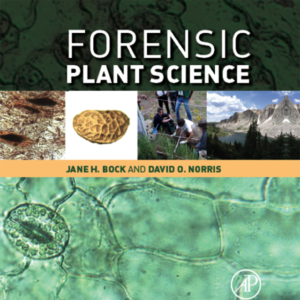 During other cases, they’ve looked at plant residue to identify if someone visited a crime scene. They can look for plant fragments found on suspect’s clothes or in their car to tie them to a particular location. Norris says people can deny ever going to the mountains, for example, but upon further analysis of their tires or leaves in their truck, they can link the fragments to a particular plant family found at a certain elevation, which can then be specified to north or south-facing slope vegetation.

But the main point of their new book is to show investigators the many tools at their disposal, most of which are easy, cheap and effective (i.e., a simple microscope, or access to an herbarium). Plus, these are not new skills.

“The techniques we used are the same techniques that botanists have used for the past three or 400 years,” Bock says. “It’s not like we’re walking in with a whole new approach.”

Despite the simplicity, both Bock and Norris say that many coroner offices don’t use these forensic strategies. So they’ve spent years traveling to conferences around the world teaching courses at various schools and law enforcement agencies, including the FBI. Now, they hope the book will keep the conversation going.

“We did the book to point out all the wonderful things [you can do] with a knowledge of plants in investigations,” Bock says. “Because we had all these cases, we could show examples. We could show how inexpensive our methods are and show how easy they are.”

In the end, it’s about trying to help solve cases.

“American justice can always be improved,” she says. “I’m interested in doing whatever I can as just a citizen.”

Secondarily, they both hope to get more people interested in the variety of sciences. Norris says he wants to see more methodology applied to forensics.

“We feel good if we have helped bring a person to justice,” he says. “Especially if we use good science to do it.”