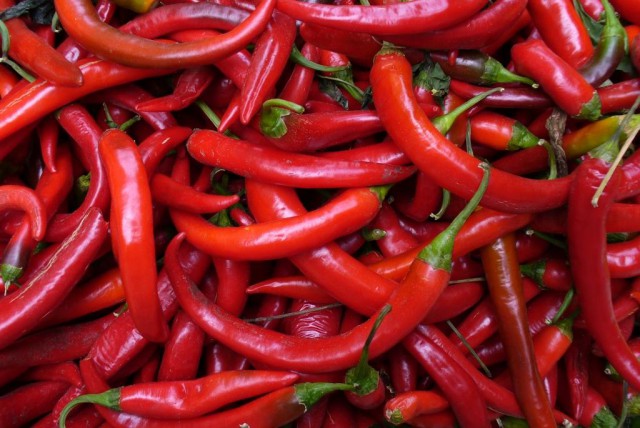 Red chili peppers are hot, both as a spice and as a new remedy for pain relief. It turns out that capsaicin, the substance that gives hot chili peppers their fire, also acts as an anti-inflammatory agent and pain reliever.

Capsaicin has been used for centuries to treat pain, particularly in locales where the spice is a culinary passion. “It’s a nerve toxin which enables you to selectively choose nerves to kill off,” explains Dr. Wendye Robbins. Capsaicin works to alleviate pain associated with (nerve disorders) diabetes, neuralgia, HIV or regional pain syndrome. Seven out of 10 patients suffering from chest or foot pain from these disorders improved by at least 50 percent. With more potent (concentrated) creams, all 10 participants reported some relief (but it doesn’t work as effectively as the high dose).

The high dose kills off the bad nerves and spares the good ones, while the low dose will detract from the pain, but it will not kill the nerves. Low doses may be effective for some patients. “In low doses, it is a counter-irritant; it’s still active at the receptor and you will get a dying off of some nerves,” says Robbins. “But patients would have to use over-the-counter ointments three times a day, and they would still get less relief than from a single high dose.”

The defining characteristics of many nerve disorders is severe, often unbearable pain. “I pride myself on being able to handle pain,” claims Barbara Martin, a Trigeminal Neuralgia (TN) patient who eventually found relief through capsaicin. TN is a condition of the trigeminal nerve that causes episodic attacks or nerve spasms. “I had two natural childbirths (one a breech birth) with no pain killers at all — I thought I could handle the pain (of TN),” says Martin. “I couldn’t handle it.”

Unfortunately, awareness of the healing capabilities of capsaicin is limited. In fact, it is extremely rare for a doctor to recommend or prescribe capsaicin to their  neuropathic patients.

Many patients resort to creating “rituals” to help them handle the excruciating pain of their disorder. “I found that continually moving my jaw in a chewing motion, and swinging my arms vigorously while walking rapidly in a clockwise [counter-clockwise didn’t work] circle could help me get through a spasm,” says Martin. “Weird, but somehow I managed.”

Traditional medications for disorders such as TN are often debilitating in and of themselves.

“I was horrified to read all the personal experiences on ‘the ’net.’ And horrified by what the traditional drugs did to people,” claims Martin. “Some were virtually helpless, some never left their beds, they lost their jobs, some couldn’t eat or drink, many contemplated suicide.”

Not only do the drugs come with devastating side effects, but they are also ineffective for some patients. That is when capsaicin can truly be a life saver.

“Patients who did not respond to other pain medicines found relief with high dose capsaicin,” says Robbins. “Some of them got three to four months of relief from a single exposure.”

Most traditional medications act on all nerves, regardless of whether the nerves are affected by the disorder.

“It [capsaicin] is exciting technology, it’s safe and it has good outcomes,” claims Robbins. “It kills off the bad nerves and leaves the good ones alone.”

Capsaicin can be used as a topical medicine for numerous skin conditions and chronic skin pains, including arthritis pain, bruises, shingles, postoperative amputation trauma, psoriasis and nerve pain. For reasons still not completely understood, capsaicin alters the action of Substance P, a nerve chemical that sends pain messages to the brain. Some experts are under the impression that capsaicin depletes the body of Substance P. However, Robbins argues that “the depletion of substance P is a misstatement, I know you see that all over, but what we know is that capsaicin binds to a receptor, activates it, and then inactivates it (eventually causing a change in the direction of blood flow).”

Capsaicin acts as an anesthetic. In fact, it is the active ingredient in the over-the-counter cream Zostrix, recommended for arthritis foot pain and the pain of shingles. When applied to the skin it often stings and burns initially.

“Capsaicin can be uncomfortable for many people at the beginning. The cream naturally burns (being the essence of hot chili peppers),” says Martin. “But people should understand that the burning sensation goes away after a few applications — it may even take a week or two for the burning to disappear.”

The pain associated with these types of nerve disorders is so excruciating that it has been known to drive many to suicide.

“A lot of people end up trying to end their lives,” says Robbins. “That’s why people like Jack Kevorkian have a role.”

She wants to give people the opportunity to kill the pain and continue to live themselves.

“I just wish that all TN people would at least try the capsaicin [with a doctor’s supervision],” suggests Martin. “If it works it can put your life back to normal. It has been two years since I’ve had an attack — and the constant fear is gone. A miracle for me.”

However, Robbins urges, “It’s important for people to understand that it [capsaicin] is a nerve toxin. You should not use it without a doctor’s supervision — you could kill your nerves off.”

OTHER HOT STUFF LINKED TO SPICE

Capsaicin
positively affects internal conditions as well as external ones. It
reduces triglycerides in the blood, speeds up cholesterol breakdown, and
reduces the risk of internal blood clots that trigger heart attacks.
Scientists looked at the medical records of countries where hot, spicy
foods were regularly consumed, and they have a much lower incidence of
bloodclotting disease. Contrary to popular belief, we have long known
that eating hot peppers does not cause ulcers. In fact, it may help
prevent them. In India, the East Indies, Africa, Mexico and the
Caribbean, red pepper has a long history as a stomach-settling aid. It
can be used to ease digestive problems but should not be used by someone
who already has an ulcer. With its ability to speed up metabolism and
lower blood sugar levels, hot and spicy food may even help you lose
weight. Pass the Buffalo wings!

Amy Paturel is a health writer in California and a blogger for
SELF.com. She holds master’s degrees in nutrition and public health,
both from Tufts University in Boston, Mass. This article first appeared
at CBS Healthwatch.