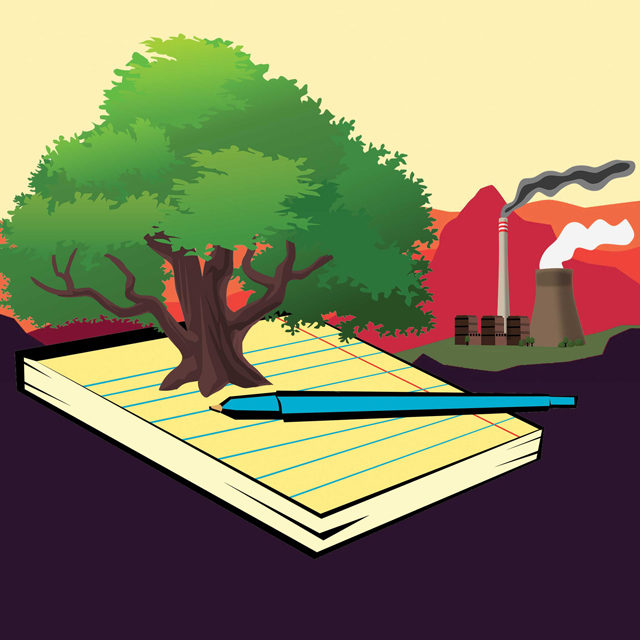 “I was noticing recently how loud the birds are,” says local poet Samantha Albala. “And I don’t know if that means that there are just more birds here than usual or I just had missed them in the winter. But it’s good to notice these small things and writing about them helps people notice their relevance or significance.”

Poetry is naturally a product of keen observation. It has the power to evoke both emotion and response, putting words to our internal desires, human relationships, social dynamics and the natural world — or a cross-section of it all. Poetry becomes all the more powerful when addressing threats to the very existence of the world as we know it, say, for example, the reality of climate change.

“I think it’s really hard for us (poets) not to write about it,” Albala says. “I think anyone that feels able to talk about it should however they can, whether it’s writing or performing or even just sharing it with a friend. I think that has a huge impact.”

As such, ecopoetics is a growing genre of poetry, rising out of the late 20th century as a response to impending environmental disaster. It also has somewhat of a legacy in Boulder, says Marcus If, chairperson of the local Beyond Academia Free Skool (BAFS). Some of the first eco-literature classes were taught at Naropa University by the late professor and poet Jack Collom. (If was in Collom’s first eco-lit class in 1989.) Combine that with the tradition of poets like Allen Ginsberg and Ed Sanders, who employed investigative poetics in their work, and you get what BAFS calls “Ecopoetic Activism.” (If describes investigative poetics as “going in and finding out what is the actual issue and [putting] these facts in versified form so maybe they’re easier to ingest by some audiences.”)

Ecopoetic Activism is the latest topic of BAFS’ free monthly Second Sunday poetry workshops at the Boulder Library, hosted with support from the Boulder County Arts Alliance. Founded in 2012, BAFS focuses on what If calls “multidimensional poetics” incorporating academic poetry, slam poetry and everything in-between, and the monthly workshops cover a variety of topics and techniques.

For May and June this year, If says the reality of climate change held a certain level of urgency for him, as he watched Greta Thunberg and other kids around the world speaking with world leaders and demonstrating on behalf of the planet.

“The idea of ecopoetics is naturally hot in Boulder and it’s a thing that as poets, we are always talking about,” If says. “But I think it’s again time for us to examine just what that role is and what power we hold.”

Poetry can become a tool in addressing the issue in a way that draws people in, adds Sarah Rodriguez, BAFS board member and teacher. Even something as seemingly simple as describing the natural world without bias, can lead people to both an emotional response and ultimately some sort of action.

“People feel emotionally about our environment, about the way the world is going, about the sustainability of our lifestyles, and poetry can really zero in on that emotion,” she says. And BAFS’ workshops in ecopoetic activism are about “using the whole toolbox from physical description to impassioned politics and figuring out where your work lies on that scope,” she says.

The hope of the workshops, according to If and Rodriguez, isn’t to add more fuel to the fire, inciting more division in the growing polarization of society. Rather, it’s rooted in the belief that poetry can be a source of unity.

“Poetry is a really natural way to circumvent dichotomous thinking. A big part of this political rhetoric is either/or, it’s us or them,” Rodriguez says. “I think through poetics we’re able to say why not both? Why not all of us?”

The theme of ecopoetic activism will continue at the annual BAFS poetry camp in July, focusing on a wide range of poets and issues that fall under the title of  “Outlaw Poetics/Literary Activism.” After all, it’s what being a poet is all about.

“The way I look at it is poets are the therapists of culture and when culture is broken, it’s the job of poets to fix it,” If says. “I’ll take it one step down from Plato. I don’t want to put the poets in charge. We wouldn’t want the job, but I do believe that we should be running our mouths as loud as possible and potentially with the same amount of spin that the politicians are using in order to equalize the issues. We have a responsibility to do that.”

Ecopoetic Activism Part 11 will take place at 2 p.m. on Sunday, June 9 at the Boulder Library. BAFS summer poetry camp is July 5-19 at the Love Shovel Ranch in Nederland. For more information visit loveshovelranch.com/bafs/