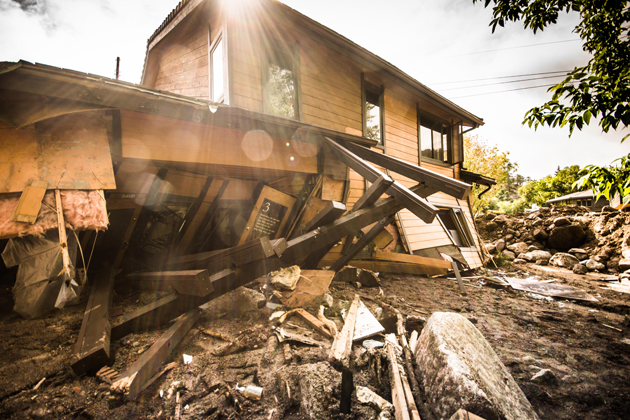 Geologists and emergency managers are working to improve our ability to predict and prepare for future mudslides in the Front Range region — an increasingly visible issue after September’s historic flooding led to roughly 1,000 mudslides — but there’s still a long way to go in that area of natural disaster prediction and planning. Adding to the difficulty, says Colorado-based U.S. Geological Survey researcher Jonathan Godt, is that with last year’s unprecedented rainfall and flooding, “we’re dealing with things that are essentially out of our recent historical record.”

The U.S. Geological Survey is coordinating with the Office of Emergency Management to improve the community’s ability to prepare for and respond to mudslides.

“The problem is our potential flood season, or monsoon season, starts April 15,” says Dan Barber, deputy director of the Boulder County Office of Emergency Management. “So we’re in it today. The snowmelt has started.”

And snowpack around the Front Range is higher than usual, nearly as high as the record snow year in 2011. Barber says that Boulder Creek, normally flowing at about 10 cubic feet per second this time of year, is flowing at about four times that volume. With El Niño expected to bring higher levels of rainfall this year, plus “throw in a few storms” in the late summer, Barber isn’t sure we can accurately predict whether there will be problematic mudslides again this season, or just normal, smallscale “nuisance” slides.

Jason Kean, a U.S. Geological Survey researcher who specializes in the links between post-wildfire landscapes and debris flows, says the USGS has developed “rainfall thresholds” to help predict how much rain, over how much time — say, more than a half inch of rain an hour over the course of a half hour — is likely to cause a debris flow in burn areas. But while the USGS is working to improve its understanding of these thresholds in the Boulder region, they’ve only really nailed down the analysis Southern California. The analysis is rendered into an online map and information useful to emergency management teams, to help estimate the probability and magnitude of a debris flow in a fire scar. But as of now, the agency has created only one such map for the January Colby Fire in Los Angeles County. In Colorado, Kean says, beyond the September flooding and the debris flows it caused, there’s still not enough data to establish the reliable thresholds needed for effective mapping, particularly in fire-scarred areas.

Local emergency managers, of course, would love to have a better idea of what’s ahead.

Gregory Anderson, Boulder Mountain Fire District captain and incident commander for the district during the September flooding, says, “If there’s anything we can do to be better prepared, we want to do it.”

Fourmile Canyon Creek drains through the middle of Anderson’s district, and a “preplan” for action has been in place ever since the 2010 Fourmile Fire — because when heavy rains fall on the burn scar, “the water just runs off very, very quickly and takes a lot of mud with it.” So in the September rainfall, Anderson put field scouts on the ground and blocked vulnerable roads to traffic. The detailed information Anderson’s crew was able to gather during the rain and flooding prompted the Geological Survey to collaborate with the district to improve landslide predictions and to help avert future loss of life. Before the rainy season gets too far along, Anderson says, he hopes that the Geological Survey will be able to install soil moisture monitors in his district as planned — once they can turn their attention from Oso.

The recent mudslide in Oso, Wash., was more destructive than anyone could have predicted. An estimated 10 million cubic-yard surge of mud and debris, sliding downhill at up to 60 miles per hour, rushing over a 600-foot bluff and traveling nearly a mile before it settled, moved three times farther and grew much larger than past data could indicate. The cement-like mix of soil, water, rock and woody debris buried 30 houses and claimed 41 lives, with many people still unaccounted for.

But experts say that the mudslides, or “debris flows,” that Colorado experienced in September are of a very different nature than the Oso slide, and we shouldn’t fear a flow of Oso proportions in the future.

There are real geological distinctions between Oso and the Front Range. The slopes along rivers draining the foothills of the Cascade Mountains of northwest Washington, says Godt, consist of “fairly thick packages of sand and silt,” a result of glacial sedimentation. (Godt spent a week in Oso in April in the aftermath of the slide.) This isn’t the case along the Front Range, where the aptly-named Rockies are much more, well, rocky, relatively close to the surface.

“In the simplest of terms, Washington has a dirt mountain, and ours is a rock mountain,” Barber says.

Another distinction born of geological differences: Oso was a deep landslide — “a different animal than we experienced on the Front Range in September,” Kean says. Nonetheless, he added, Front Range slides can quickly grow in size and strength as they gather more debris on their downward path — strong enough to slice a building in two, as happened to the offices at 100 Arapahoe at the foot of Boulder Canyon; or to take a person’s life and bury his house, like happened to Joey Howlett of Jamestown during the first days of the September flooding. But most of the 1,000 small Front Range debris flows in September were only a few feet deep, leaving welldefined landslide scars, many of them visible along the eastern slope of the Front Range. But in Oso, experts say, the “failure plane” that started the slide was in glacial sediment, hundreds of feet below the surface.

One similar factor in mudslides, whether in northwest Washington or the Colorado Front Range, is soil saturation. Heavy rains preceded the Oso slide, and scientists are still trying to determine just how soil saturation factored into the slide’s force.

“There’s a strong association of debris flow activity with forest fire in mountainous terrain, in part because of the changes in soil properties,” Godt says. “You would expect that as more places burn more severely that more debris flow activity would occur, given the same rainfall activity.” On top of its close collaboration with the U.S. Geological Survey, Boulder County is working with the Urban Drainage Flood Control District for the next five months — through Sept. 15 — to monitor the potential for flooding and debris flows. The Office of Emergency Management is raising awareness for people in Boulder’s high-risk areas to prepare for mudslides to the extent possible. This means recognizing when hillsides are sagging, when trees that normally stand upright are leaning and when heavy rain has been falling and is expected to continue — and staying out of harm’s way.

The massive post-mudslide analysis in Washington will surely yield lessons for Colorado, says Kean, not to mention the lessons learned from last September. In some ways, he says, “the post-fire debris flow problem is quite a bit easier than the prediction problem for Oso.”

But we’re still a long way from anything resembling a fail-safe early alert system, especially if more unprecedented weather events come our way.

Last year, “We were preparing for flooding from the Four Mile burn area and the entire region flooded,” Barber said. “This is whole new territory.”