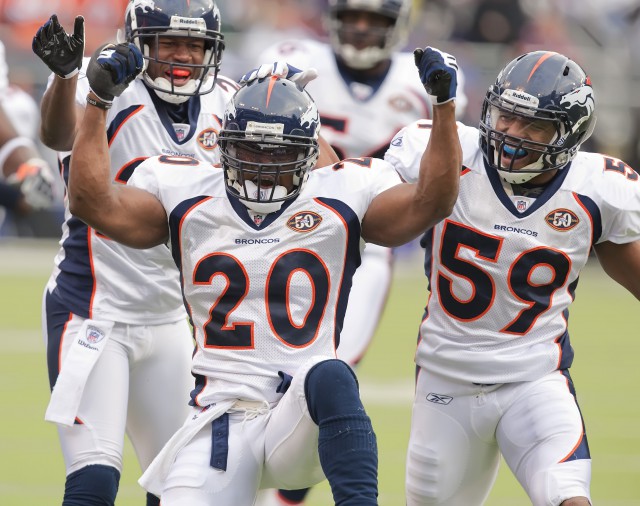 But there’s an art to picking the right game to give. Here’s a head start:

Why the Broncos: Because this state is crazy about them. Because coach Josh McDaniels just might go off on a random fist-pumping spree that you don’t want to miss. Because it’s the NFL.

vs. Kansas City Chiefs Jan. 3, 4:15 p.m. The Broncos started the season 6-0, and, man, were they a lock for the playoffs. Oops. Following a four-game losing streak coming off their Week 7 bye, things weren’t so locked up anymore. This game against the Chiefs in the final week of the regular season very well could determine Denver’s playoff fate.

Why the Nuggets: Because they have a talented roster (finally) led by homegrown guard Chauncey Billups. Because it’s a fast-paced, fan-friendly atmosphere. Because it won’t cost you an arm and a leg — unless you want it to.

vs. Cleveland Cavaliers Jan. 8, 8:30 p.m. Set to be televised nationally on ESPN, you have two options: sit at home and watch the game, or go to the game, make a sign and let your friends watching at home see you. Oh, seeing LeBron James in person isn’t a bad deal, either.

If you’ve got a kid that’s a fan of Superman, the Magic’s Dwight Howard may just be the closest human equivalent. At 6-foot-11, 265 pounds, the forward does freakishly athletic stuff that should not be physically possible on this planet.

vs. Utah Jazz Jan. 17, 7 p.m. The Jazz may not have one superstar who stands out, but there’s a reason Utah has started off the 2009-10 season as well as they have. Besides, there’s always an excuse to see this Nuggets’ Northwest Division rival.

vs. New Orleans Hornets Jan. 23, 7 p.m.; March 18, 7:30 p.m. Chris Paul may very well be the best point guard in the NBA right now. In his fourth year, the 6-foot, 175pound sparkplug knows how to run an offense — something that could make an impression on young, developing hoopsters.

vs. San Antonio Spurs Feb. 11, 8:30 p.m.; April 10, 7 p.m. One day, Tim Duncan will be in the Hall of Fame. He’s got a pretty talented and exciting supporting cast, too, from rookie DeJuan Blair to eight-year veteran Richard Jefferson.

vs. Boston Celtics Feb. 21, 1:30 p.m. Champions two years ago, the Celtics could very well be the most prestigious team in the history of the NBA. It’s not like the 2009-10 version are slouches, either: Kevin Garnett, Ray Allen, Rajon Rondo and Paul Pierce dot the roster.

Just a few short years ago, no one ever would have dreamed that the Portland Trailblazers would make for a must-see game. Well, things have changed — thanks to a talented young roster led by Brandon Roy, Greg Oden and LaMarcus Aldridge.

vs. Milwaukee Bucks March 20, 7 p.m. There has been no rookie as explosive as the Bucks’ Brandon Jennings in the early-going of the 2009-10 NBA season. In his first 19 games, he poured in 20 or more points seven times — including a 55-point outburst against Golden State in mid-November.

vs. Los Angeles Lakers April 8, 8:30 p.m. In a rematch of last year’s Western Conference Finals, this is the final regular-season meeting between the two teams. Kobe Bryant, Pau Gasol, Lamar Odom, Luke Walton, Andrew Bynum — need we say more? Besides, when someone asks you on April 9, “Hey, did you catch the Lakers-Nuggets game last night?” you’d be much better off saying, “I was there.”

Why the Avalanche: Because goalie Craig Anderson may have been the best off-season pickup in the NHL. Because 18-year-old Matt Duchene is the future of the franchise. Because when a hockey player gets cut, he gets stitches on the bench so he doesn’t miss a shift.

vs. New Jersey Devils Jan. 16, 1 p.m. Sure, it was almost nine years ago now, but what Avs fan would pass up the chance to reminisce when the Devils roll into the Pepsi Center? Who could forget the teams’ seven-game battle for the Cup in 2001, with Ray Bourque finally getting a chance to hoist it?

vs. Phoenix Coyotes Feb. 12, 7 p.m. Sure, they were this close to becoming the Hamilton Blackberries, but the fact is that the Coyotes have arguably the best young core of players around — and new coach Dave Tippett is doing wonders with the squad.

vs. Detroit Red Wings March 1, 7 p.m. It’s lost some luster over the years, but a Wings-Avs game always has the potential to be bloody. Getting a chance to see Pavel Datsyuk and Henrik Zetterberg is a plus, too.

vs. Chicago Blackhawks April 9, 7 p.m. Patrick Kane and Jonathan Toews are the best young tandem the NHL has to offer this side of Sidney Crosby and Evgeni Malkin. Don’t miss a chance to watch them in action.