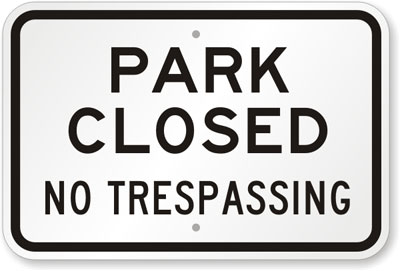 This image is property of http://www.roadtrafficsigns.com.

Beware government bureaucrats who want to make rules to protect your safety. Far too often their goal is something far more insidious.

City Manager Jane Brautigam has proposed a new rule that would close city parks and open space from 11 p.m. to 5 a.m. — or at any time the city manager declares an “emergency closure.” A hearing on the matter is scheduled for 5 p.m. on Jan. 3 in the city council chambers.

The 11 p.m. to 5 p.m. closure rule would not apply to people hiking or walking on trails and sidewalks, only ban sitting or standing still in city-owned parks and open space. (It is already illegal to sleep, aka lie down, in public in the city of Boulder, a rule that targets the homeless.)

Though the new closure rule ostensibly is intended to preserve public health and safety, the full text of the rule makes it very clear that it is also intended as a means for city officials to put an end to activities they find inconvenient and irritating. They can’t come out and say that, of course, so here’s how they phrase it: “This rule is for the … prohibition of conduct that may reasonably be expected to interfere substantially with the use and enjoyment of parks, parkways, recreation ways and open space by the general public or that constitutes a nuisance … ” The document, provided for viewing on the city’s website, goes on to say, “This rule is also intended to address the potential myriad of negative impacts to public property, including and not limited to, sanitation, safety, security, and the preservation of public property that results from around-the-clock use of public property.” (For the full text of the proposed rule, go to www.bouldercolorado.gov.)

Brautigam and other city officials are trying to pass the proposed rule off as a well-intentioned effort to protect public safety and sanitation. They say it has nothing to do with the Occupy Boulder movement, some members of which are currently occupying the lawn of the municipal building.

Do they think anyone really buys that? Are we supposed to believe that city bureaucrats came up with this new rule randomly? If so, the conversation must have gone something like this:

“Have you ever seen people sitting or standing in a public park between 11 p.m. and 5 a.m. — not counting the activists who’ve been hanging out for almost three months — and wondered whether the public safety, health, property, vegetation, wildlife, signs, markers, buildings or other structures of our public parks were at risk?” “Now that you randomly mention it, yes, I have — not thinking, of course, of the activists encamped outside our door.”

“Clearly, then, this is a pressing issue. We must act immediately!” The proposed rule seems very clearly to target Occupy Boulder and any future movements like it, as well as potentially creating another host of legal hassles for our city’s homeless population. Now, it’s not just the homeless caught “camping” in public who can be ticketed, but also those who are caught sitting or standing after 11 p.m.

The city has assured us that this new rule would not unreasonably curtail free speech. After all, 18 out of every 24 hours would be available for speaking truth to power. Well, that’s all fine and good, but it doesn’t take into account the “emergency closure” clause of the rule, which would permit the city to shut city-owned parks and open space at any time. Nor does it fully satisfy the “free” aspect of “free speech.”

Since 9/11, we’ve seen an increasing government impulse to cordon off free speech. Citizens who wished to tell George W. what they thought of his war in Iraq were relegated to free speech zones far from his view — a clear diminishment of the constitutionally protected right to the redress of wrongs. Now the city of Boulder is trying to tell us what time of day we can seek redress of grievances and speak our minds.

What is free about that? More importantly, what is Boulder about that? Brautigam and city staff may be talking about public safety and sanitation, but what they’re seeking is control.

To sign the petition opposing the proposed rule, go to: www.thepetitionsite.com/2/illegal-to-sit-or-stand.