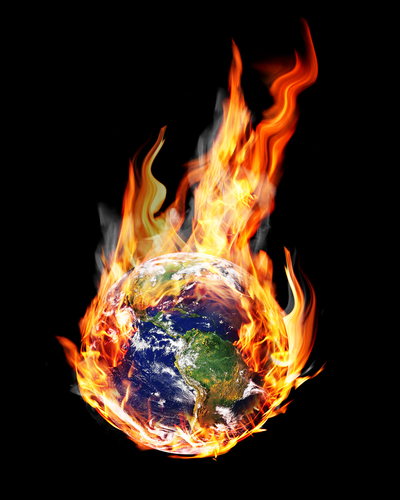 Let’s take a moment from sweating in this record-breaking heat and the catastrophic fires to think about something even less pleasant — the end of the world as we know it.

The June 6 issue of Nature featured an article written by a global team of more than 20 scientists who warn that the Earth is nearing — or has perhaps already passed — a “tipping point” that will lead to dramatic and perhaps irreversible global environmental changes affecting the planet’s abilities to support life. These could include increased temperatures, mass extinctions of flora and fauna, and wholesale shifts in the food web that could be devastating for us physically fragile homo sapiens.

Brought on by increased C02 levels in the atmosphere; the loss of habitat for plants and animals; pollution in our air, soil and water; overfishing; and other causes, the situation will be made worse by the growing human population, which is expected to balloon from 7 billion to 9 billion by 2045.

In other words, if we’re not aggressive in slowing down population growth and reversing our overall impact on water, land and air, the Earth will eventually be suitable habitat for cockroaches and bindweed — and perhaps little else.

Although the changes could occur slowly, they could also happen without warning and very quickly, the scientists concluded.

This is far from the only recent study to make dire predictions about the impact of human population and activity on Earth.

In his book The Ocean of Life, marine biologist Callum Roberts warns that we’re looking at a future in which the oceans will be populated primarily by jellyfish and algae — a change he claims is already under way, as most of our polluted and overfished seas have lost up to 75 percent of their sharks, whales, dolphins, rays, turtles and other larger creatures.

Here in the United States, we typically deal with dire environmental predictions by leaving it up to the individual to respond. Organizations like Eco-Cycle encourage us to drive less, to recycle, to compost, to be more efficient with home energy and water use. Yet even here in educated, environmentally conscious Boulder County, compliance is far from 100 percent. Further, the changes we’ve made aren’t enough to forestall a global environmental cataclysm.

To do that, we need to change the individual behavior of 7 billion people. And that means we need government to intervene and lead us.

Yes, I know there are those who believe government can’t do a single thing correctly and that the world would be a paradise if only we left everything in the hands of global corporate greed mongers. But I don’t trust Halliburton, Kraft or Exxon to have anyone’s interests at heart but their own. Government, on the other hand, is elected to represent us. If we have the will, certainly we have the means.

Our representatives can start by setting aside reserves of petroleum for products we can’t live without and turning to wind, solar, tidal, biomass and other forms of energy wholesale. If that means prioritizing public transportation and electric cars and placing limits on the use of gas-powered, single-occupancy vehicles, so be it.

The state should also preserve and protect our remaining undeveloped land — our tundra, forests, plains, marshes and oceans — for use by the earth itself. Protecting the parts of this planet that remain intact could be key in helping the global ecosystem rebalance itself.

The state should also restrict the use of chemicals in manufacturing and farming, banning estrogenic chemicals, persistent bioaccumulative toxins and other known killers.

Preserving fresh water is also paramount. The state should pass laws that prioritize water for human and agricultural use, diverting it from uses that pollute it and take it out of the natural water cycle, such as hydraulic fracturing.

While limiting the damage people and corporations do, the state should also focus on the positive things we can do for ourselves by encouraging and supporting organic urban farming, widespread reskilling, self-sufficiency and small families.

When it comes to comfort, there has never been a better time to be a human being. We can ride out this heat wave with our air conditioning set on high. But this system of living we’ve built for our own comfort is at odds with the planet’s web of life.

It’s time to transform that system into something sustainable. If we can’t manage that fast enough … Well, cockroaches are edible. I’m not sure about bindweed.