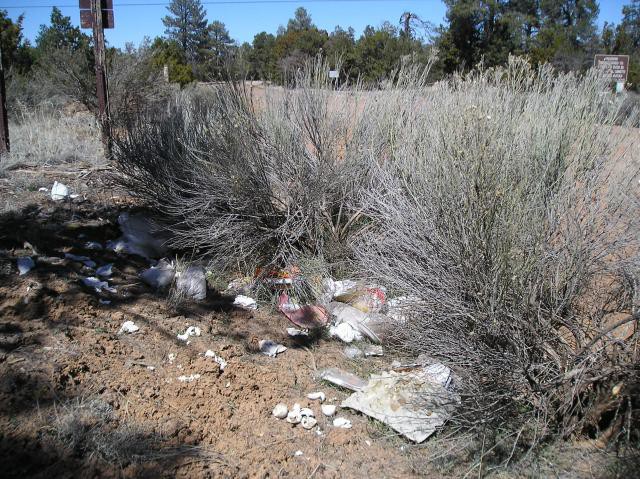 That’s what members of the Rocky Mountain Firearm Club (RMFC) found when they headed up Lefthand Canyon in search of a safe place for target shooting on public land.

“When I go to any sort of site up in the mountains where there’s shooting, I see all this trash all over the place,” says Chris Wu, a founding member of RMFC. “It really irritates me. It makes us look like a bunch of rednecks. A few bad apples ruin the bunch. We try to police the area as much as we can, but people leave all kinds of nasty things.”

It seems that the “Leave No Trace” ethic hasn’t quite caught on among recreational shooters to the same degree that it has among rock climbers, mountain bikers and other recreationists.

Members of RMFC are expected to participate in public-service projects, in addition to cleaning up after each RMFC shooting event.

“Every once in a while we go and find a place that has been trashed to heck, take a few bags and clean the place up and hope others follow the example,” Wu says.

The U.S. Forest Service allows only certain kinds of targets: cardboard targets, paper targets, manufactured metallic targets specifically designed for firearms, and clay pigeons. But according to Ranger Trey Schillie, some people choose not to follow the rules.

“It’s amazing what you find,” says Schillie, district ranger for the Boulder Ranger District of the Arapahoe and Roosevelt National Forest and Pawnee National Grassland. “We’ve seen everything from appliances to bottles to scrap lumber. In my office what I’m looking at right now is an old propane tank, and it’s full of holes.”

Schillie says he’s seen instances in which shooters have deliberately tried to shoot trees until the trees fell over.

Sadly, the U.S. Forest Service has to dedicate staff and time to cleaning up the mess these irresponsible shooters leave behind.

“We try to organize different groups to help on that, cleaning up shooting areas,” Schillie says. “We have a cadre of really responsible folks out there who pack it in and pack it out. But there always seems to be the other side of the coin — a few people who give [recreational shooting] a bad name.”

Part of the problem may be the lack of established public rifle ranges. This results in shooters from the Denver metro area driving into the mountains to shoot on Forest Service land. A network of public ranges spread across the state and through the Denver metro area might help decrease shooting traffic in places like Lefthand Canyon, reducing the wear and tear on the land. It’s an issue the Forest Service and other public land managers are beginning to address.

“We’re really starting to take a look at a comprehensive approach across all ownerships and across all landscapes,” Schillie says.

But trash is only part of the problem.

Irresponsible shooters might one day cost someone a limb — or a life.

The former Allenspark dump was closed to shooting after law enforcement documented 18 instances of “near misses” when shots fired on public land made their way onto private land, nearly hitting local residents, Schillie says.

“On the Front Range, we’re really fortunate to have all this public land,” he says. “Shooting is one of the more difficult [recreational uses] to manage because the consequences are very high if things go wrong,” he says.

What’s a responsible shooter supposed to do?

Fire only in areas where it’s safe, and pack out every bit of your trash. Then volunteer to clean up after other shooters who aren’t as responsible as you are so that recreational shooting doesn’t garner ill will from land managers and the public.

Implied in the Second Amendment is a grave sense of personal responsibility. The Founders didn’t guarantee us the right to bear arms so that we could shoot down trees, blast refrigerators to bits and scare the hell out of nearby residents.

The right to own firearms is protected under the Second Amendment. But leaving your shooting area looking like the site of a redneck family reunion is not.