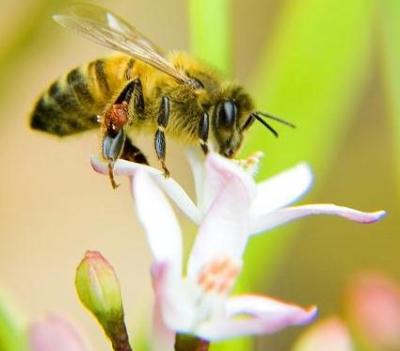 When we can’t grow our own organic vegetables — in the middle of winter, for example — we buy organic.

Sometimes we get more than we paid for. Like the small green caterpillar that somehow made it into my son’s broccoli last week despite careful washing and rinsing.

But there are worse things than caterpillars in your food.

On April 5, the Harvard School of Public Health (HSPH) set off an uproar when it announced the findings of a new study linking a common pesticide with colony collapse disorder (CCD), which has been killing honey bees by the millions since it was identified in 2006.

Researchers have long suspected that pesticides known as neonicotinoids played some role in the demise of bee colonies, but the authors of this new study claim to have “convincing evidence” that imidacloprid, a specific neonicotinoid, is linked to CCD, in which adult bees abandon their hives and perish.

According to the study, bees are being exposed to imidacloprid in two different ways. The first is by drinking nectar from flowers on plants that have been treated with the pesticide. The second is by being fed high-fructose corn syrup (HFCS) by beekeepers. Because most U.S.-grown corn is treated with imidacloprid, the bees ingest the pesticide when they eat HFCS.

It helps to understand a little bit about bees. Bees collect nectar and pollen and bring both back to their hives, where the nectar is mixed with enzymes and stored. The nectar mixture gradually thickens, a process brought about by the flapping of the bees’ tiny wings. When the enzymes have done their job and most of the moisture in the mixture has evaporated, the bees have made honey.

The pollen bees collect is also mixed with enzymes and creates a substance called “bee bread,” which, together with honey, serves as food for the busy little creatures.

Beehives constitute their own microecosystem that includes not only bees with different tasks, but also thousands of beneficial microorganisms. When raised naturally, bees are very good at maintaining the balance in their hives.

But during modern times, people have found lots of ways to upset that balance. While natural beekeepers leave enough honey after the fall honey harvest to sustain their colonies through the winter, many commercial operations harvest every drop of honey and feed their bees HFCS instead. No matter what the corn industry wants to tell you, honey and HFCS are not the same thing, particularly not when the corn syrup comes with imidacloprid.

Harvard researchers monitored bees in four different locations, each location home to four hives that were treated with different levels of imidacloprid. At first, the chemical didn’t seem to affect the bees. But after 23 weeks, 15 out of the 16 hives had died in a fashion consistent with CCD. The hives that received the highest doses of imidacloprid collapsed first.

While Chesheng Lu, an associate professor of environmental exposure biology and one of the authors of the study, thinks imidacloprid should be banned in an effort to see whether its absence reduces hive losses, the pesticide industry is doing what industry always does — attacking the messenger and assuring the public that we can go back to sleep now because everything is just fine.

But clearly everything isn’t fine.

Some beekeepers report losing up to 90 percent of their hives — a staggering loss not just to them, but also to the farmers who depend on the bees to pollinate their crops. How exactly imidacloprid hurts bees is uncertain. Does it damage bees directly or harm their larva? Is it cumulative or just one of many factors? Does it hurt hives by leaving them more vulnerable to parasites, or does it destroy the beneficial microorganisms in hives?

Regardless of the mechanism, researchers are convinced there’s a connection between imidacloprid and CCD.

But what about the implications for human health? Beyond the possibility of global calamity due to losing our main crop pollinator, there’s the possibility that we, too, are being harmed through constant and cumulative exposure to small amounts of pesticides, herbicides and other chemicals that make their way into food.

So what can we do? We can’t wait for industry to solve the problem. People who make chemicals want to sell chemicals, not take them off the market. Nor can we wait for some government regulatory agency to step up and ban potentially dangerous toxins. Most regulatory agencies are heavily influenced by industry.

Instead, we need to demand that imidacloprid — along with known persistent bio-accumulative toxins, estrogenic chemicals and certain pesticides and herbicides — be banned.

In the meantime, it’s imperative to buy organic, not just organic honey, but organic produce, the cultivation of which does not contribute to harming bee colonies. Bees, so benevolent and essential to life on earth, may well be the proverbial canary in our ecological coal mine. We ignore their plight at our peril.