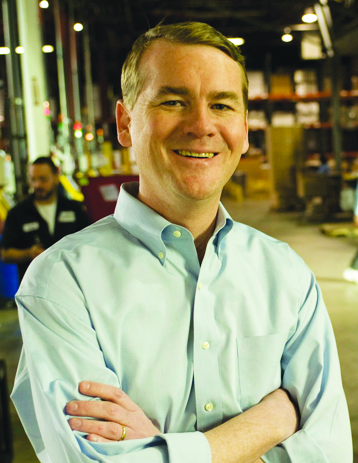 WE WERE HOPING TO be voting for Andrew Romanoff in this Senate race, but incumbent Michael Bennet will have to do.

Kinsey and Stringer might pick up a percentage point or two, but this is a race between Bennet and Buck, and polling has been tight between them. We support Bennet, partially due to Buck’s hard-right platform, but Bennet does bring something to the table — including family history.

Bennet’s grandfather held a position in the FDR administration, and his father worked in the Carter and Clinton administrations. Bennet has a law degree from Yale, served as counsel to the deputy attorney general, was the managing director of the Anschutz Investment Company, served as Denver Mayor John Hickenlooper’s chief of staff and was superintendent of Denver Public Schools before being appointed to the U.S. Senate in 2009. So Bennet does have experience in law, finance, education and the political world.

Bennet came to the Senate at a difficult time — as the financial collapse was live news and shortly before the health care debate began raging in Congress. He voted for the health care bill, saying that it didn’t matter if that vote cost him his Senate seat. On the fiscal side, he has supported stimulus funding — until he recently expressed opposition to the president’s latest $50 billion proposal.

Whether or not Congress continues to see stimulus packages as viable options, Bennet is focusing on other ways to get the economy working again. He’s cosponsored and voted for legislation to make small-business loans more accessible. He’s introduced legislation on tax incentives for businesses in rural areas and voted for incentives for the clean-energy economy. He’s on the leading edge of responsible school reform and favors increased job training for clean-energy industries of the future. And he’s a social moderate, something we can’t say about Buck, who opposes abortion even in cases of rape and incest.

While Bennet’s dealings with the Denver Public Schools retirement fund while he was DPS superintendent were called into question right before the primary, he is certainly more qualified and in touch with reality than Buck.

Buck earned his law degree from the University of Wyoming. He went on to work on the Iran-Contra investigation in 1986, serve in the Colorado U.S. Attorney’s Office as chief of the criminal division, and teach law before winning his election for Weld County district attorney in 2004. It’s a nice resume, but not as rounded and diverse as Bennet’s.

And his platform is questionable, to say the least. Buck has at least mentioned support for overturning Roe v.

Wade, privatizing the Veteran’s Administration, keeping the Bush tax cuts for the wealthy in place, posting the 10 Commandments in public places, eliminating the U.S. Department of Education and at least partially privatizing Social Security. Politicians can’t accomplish anything if they don’t get elected, and Buck needed Tea Party support to beat the well-connected Jane Norton in the primary.

However, Buck now faces a general election, and campaigning on extreme positions is political poison. Voters should be aware that he’s downplaying or modifying positions he took during the primary — a strategy the website ColoradoPols. com has aptly named “Buckpedaling.”

For example, he expressed support for repealing the 17th Amendment to the U.S. Constitution, which put into place direct election for the very U.S. Senate position he’s running for — yet he was quoted in the Huffington Post as saying “it wasn’t a position I held a day later … when I reflected more on it.”

He also supported Amendment 62, which would give full constitutional rights to fertilized eggs. Then he reversed his position there, saying that while he opposes abortion, he didn’t realize the amendment would render many forms of birth control and some fertility treatments illegal.

Candidates have a right to change their minds or soften a position, but with Ken Buck, you still get hard-right positions on many issues, no matter what he’s saying at the time. Vote for Bennet — the only candidate who can keep Buck from winning.