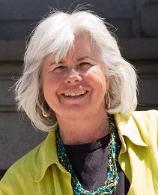 Maureen Denig, the Republican, is an intelligent, articulate
candidate. She just has different values than most of us. She opposes
moratoria on oil and gas drilling. She hasn’t seen proof that any
purported health symptoms have been caused by oil/gas drilling or
hydraulic fracturing (fracking). Denig
opposes the passage of a local climate action plan. She is worried
that the county being in the water business could let commissioners
withhold water from farmers who plant genetically modified organisms
(GMOs), and that’s too much governmental control.

Well, you can stop
right there. Deb Gardner has a proven track record of supporting
Boulder County values in the state Legislature, and she already has the
better part of a year under her belt, since she was appointed in early
2012. She appreciates the need to regulate fracking and transition
away from GMOs, among other things. Libertarian Audrey Bray did not
return calls.