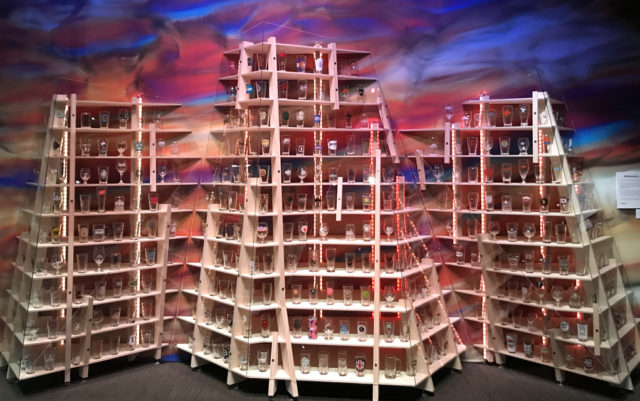 Beer Here! Brewing in the New West is the latest exhibit to open at the History Colorado Center in Denver, and it tells the story of Colorado brewers through artifacts, advertisements and anecdotes; from the tide houses of 1859 to the craft beer revolution of today.

The exhibit opens with a re-creation of a Colorado gold rush saloon, complete with a wooden bar, a brass rail running along the bottom and various era-appropriate Breweriana — branded tap handles, glassware and bottles. There’s even a Bible from Charles E. “Pop” Wyman’s Leadville saloon, which was read aloud anytime a patron swore.

Moving from room to room, decade to decade, Beer Here! depicts how beer culture became part and parcel of the American dream, from a reproduced painting of “Custer’s Last Fight,” commissioned by Anheuser-Busch, to Prohibition, when brewers tried to spin beer as a healthy alternative to the evils of hard spirits. But, as the familiar rhyme of history shows, a major driving force behind Prohibition was an anti-immigrant sentiment.

“They claimed that immigrants who drank did not respect America’s laws and values,” one placard states. Another explains how the Ku Klux Klan was employed to enforce Colorado’s dry laws.

Sound familiar? So too should the Coors advertisement campaigns of the 1960s, particularly the ones aimed at active adults who, “Taste the high country… Taste Coors.” One advertisement shows a young man draped in climbing rope, exhilarated to be clutching a can of Coors. Beer as a natural extension of an active lifestyle is a marketing ploy that has probably never fully gone away, and it was trotted out on full display in the Big Beers Calorie Wars of 2019.

More noticeable in these mid-century advertisements are examples of whom beer is marketed to, and to whom it is not. As one section explicitly points out, the post-war “White Flight” from cities to suburbs took beer from saloons to homes, and Norman Rockwell-esque magazine ads, “sent the unmistakable message that the American dream was out of reach for non-white people.”

Depending on your level of engagement, Beer Here! takes anywhere from 20 minutes to an hour to experience. And though the exhibit does a good job of connecting breweries and beer with broader political and commercial movements from 1859 to 1979, it rushes through the craft beer revolution with little social context. Brewing iconoclast Charlie Papazian’s room includes a re-created kitchen stove featuring his brew kettle and a partially eaten pie, a playful nod to Papazian’s other passion; Boulder Beer gets a little love, as does Oskar Blue’s canning collaboration with Ball Corporation. Then the exhibit concludes with a three-towered mountain of pub glasses, one from each of Colorado’s 360 breweries currently in operation.

The gap from then to now is frustrating. There’s a lot of history, legislation and state-to-state migration left to explore. Maybe they’re saving it for the sequel: Beer Still Here! One can only hope.