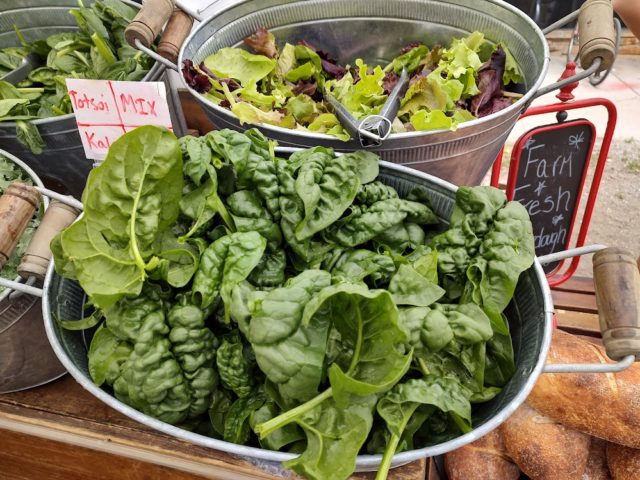 I can’t blame you if leafy greens aren’t the first food you associate with me. Frankly, anybody who reads this column knows that I write a lot about desserts and breads, plus doughnuts and lots of cheese.

I was sitting at Mumtaz Mediterranean Food recently, scarfing down an order of spanakopita, when my culinary life passed before my eyes.

Mumtaz, open since 2007 in Lafayette, serves deep-fried, filo-wrapped trianglar bundles of spinach and feta that are virtually irresistible with a side of creamy cucumber yogurt sauce for dipping.

I just realized that I have a serious, lifelong thing for spinach that started with Stouffer’s Frozen Spinach Souffle as a kid. My mind ticked off the ridiculous number of spinach-y dishes at local restaurants I’ve tasted and raved about.

I’d like to think it’s because spinach is one of the most nutrient-dense foods you can eat. It’s hard not to pat yourself on the back when you’re eating serious carotenoids, vitamin C, vitamin K, folic acid, iron, and calcium, plus fiber, lutein, quercetin and fiber.

However, transparency forces me to admit that health isn’t solely why I gravitate in a green leafy direction. I just love the taste of treats like the Turkish spinach feta roll at The BOCO Restaurant in the Meadows Shopping Center. The house-made delight is a spinach and feta mixture baked in a mildly sweet, yeasted dough. Served with butter, it’s almost like a spinach Danish for breakfast.

That’s quite a different thrill from the spinach and cheese pupusas offered at the Pupusas Familia stand at Boulder Farmers Market. The filling of these tasty discs is wrapped in a soft cornmeal shell and griddled until crispy. They are perfect with crunchy curtido slaw and hot sauce.

At Boulder’s Ali Baba Grill, the chopped greens are blended with onion, pomegranate, walnut and olive oil, wrapped in wonton skins and lightly fried. The aroma is amazing when these sambusek are cracked open.

Nearby at the Mediterranean Market & Deli, spanakopita is more like a Middle Eastern hand pie or calzone. Spinach and feta are wrapped in a light dough and griddled so it’s not oily. It’s satisfying when chunks are dunked in thick yogurt sauce with a dab of sriracha and zaatar, a thyme and olive oil dip.

Traditional Greek spinach pie is a mainstay at Boulder’s Kalita Grill. The Greek eatery’s take on spanakopita wraps multiple layers of buttery filo dough around a great spinach and cheese middle. The baked pie is griddled and plated with Greek salad and tzatziki sauce.

What’s not to like about creamed spinach? I invariably order saag paneer—the creamy spiced spinach with chewy paneer cheese chunks—and the obligatory warm garlic naan to scoop it up when at Kathmandu Restaurant, Tiffin’s India Cafe and other Indian eateries. The list of local spinach greatest hits also features the creamed spinach served at Jax Fish House and the Boulder Cork, feta and spinach pierogies at the Pierogies Factory, and pastry-wrapped espinaca empanadas at Rincon Argentino.

My spinach affection doesn’t always require the presence of cream, cheese, butter and flaky pastry. A well-composed spinach salad with a creaveable warm dressing makes for a killer summer meal.

You can find a recipe for a good spinach salad dressing from a legendary Boulder restaurant on page 29.

However, a great spinach salad requires great spinach, and all spinach is not created equal. Sadly, so-called “baby spinach” is virtually the only variety of spinach available at most supermarkets.

“Baby” spinach is no more an infant than those “baby” carrots, which are just ground down big carrots. Baby spinach is flat-leaf spinach with smooth, thin, spade-shaped leaves. This is the white bread/ button mushroom equivalent, a blandly acceptable gateway spinach that lacks the flavor and chew of real spinach, better known as curly-leaf savoy spinach. That variety has denser dark-green leaves, a crunchier texture and a whole lot more flavor. Some palates perceive this as bitterness, but that gets balanced by the salad ingredients and dressing.

That’s the spinach I found last week at the Black Cat Farm booth at the Boulder Farmers Market. Currently the stand offers Olympia spinach, but, as the season goes on, the farm will harvest other toothsome varieties including Jericho, Tango and Winter Marvel.

Make the rounds at the market or local roadside farm stands to explore more variations on a fresh spinach theme. If you saute spinach as a side dish for a dinner, remember that it takes more spinach than you can imagine to feed a family. Always enjoy the pot liquor—the liquid left in the pan after you cook spinach—that’s full of nutrients.

I draw the line at spinach smoothies. I’d rather just chew my greens.

When I recently interviewed Francea Phillips, the CEO of Meals on Wheels on Radio Nibbles, it was alarming to hear how rapidly costs have risen to deliver meals to elderly and sick Boulder residents. The nonprofit’s grocery bill has gone up from $13,000 to $30,000 each month since January, she reports. Some essential ingredients simply aren’t available, and everything else, including gas, has also gone up. One simple, satisfying way to support Meals on Wheels is to eat pie on July 4. Pick up house-made cherry, blueberry, Dutch apple, and strawberry-rhubarb pies on sale through July 2 at The Niche Market, 3701 Canfield St., Boulder. … Boulder’s curbside view changes on Aug. 31 when the emergency pandemic patios must be removed at restaurants, brewpubs, taverns, breweries, distilleries and wineries. A more formal, long-term outdoor dining program will be in force.

Coors on Your Lucky Charms

In the beginning, there was Silk soy milk and it was very, very good … at least until everybody started worrying about soy. Then almond milk appeared and was soon joined by rice, potato and cashew milks. Now there is barley milk that won’t slow you down. The silver bullet of plant-based milks is Golden Wing Barley Milk, made using Rocky Mountain water in Golden. Because of its other business, Coors has access to an unlimited supply of non-GMO barley from Colorado farmers. To make barley milk, simply cook a bunch of barley in water, blend it and strain it. That said, Golden Wing Barley Milk contains water, barley, barley malt, sunflower extract, calcium carbonate, pink Himalayan salt and shiitake mushroom extract.

“We think that if we just meditated enough or jogged enough or ate perfect food, everything would be perfect. But from the point of view of someone who is awake, that’s death.”