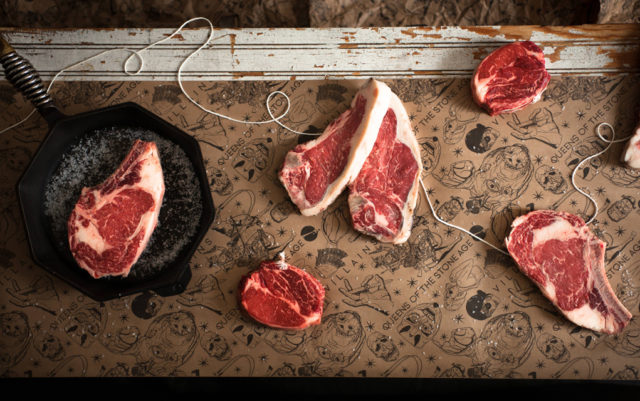 So I was surprised to hear Kate Kavanaugh, a butcher, open our conversation this way: “I was a vegetarian for 15 years.”

Kavanaugh and her partner, Josh Curtiss, run Western Daughters Butcher Shoppe, a whole animal butchery service in Denver. I first talked to Kavanaugh several months ago for a story on the resurgence of well-raised beef, but the story of how she, a freaking vegetarian, learned to butcher and then took the extraordinary step of opening a butcher shop kept us from the topic.

Kavanaugh was studying biology in grad school in Arizona. She couldn’t see a career in research ahead of her, but her studies opened up the world of regenerative agriculture. In those classes, she saw an opportunity to change a bogus, industrialized food industry from within — and how beneficial that would be to our land and our health.

“I was looking at soil biology and land management,” Kavanaugh says, “and when I started to look into these things, I started learning a lot about how regenerative agriculture can have a positive impact on the environment. … So I decided I wanted to start eating meat that supported this system.”

Regenerative agriculture — using land and animals in natural, mutually beneficial ways — was Kavanaugh’s gateway to meat. So she and Curtiss, a master carpenter, moved to New York, studied butchery, and in short order, moved back to the Front Range to open Western Daughters in 2013. The goal was to work with small-scale ranchers raising animals the right way — letting them graze on natural grasses, keeping them out of tight confines, letting them live longer — and to sell that meat, and those stories, to a consumer base in Denver and Boulder that’s savvy to the merits of raising food well.

It turns out, opening a small, whole animal butchery in 2013 was filling a void. So much so, that Kavanaugh and Curtiss found it difficult to find enough ranchers raising meat sustainably.

“When we came out here, there wasn’t anybody,” Kavanaugh says. “We made so many cold calls, and we got laughed off the phone. People thought we were crazy. Now I have between two and five ranchers contact me a month looking to sell their products. Not all of them meet our standards, but there is definitely a growing body of people looking at this.”

Western Daughters sources meat — beef, pork, chicken and lamb — from ranchers within a 200-mile radius of the Denver metro area. Their beef and lamb are 100-percent grass-fed and their pork and chicken are pasture-raised and hormone- and antibiotic-free.

But getting ranchers on board wasn’t the only unforeseen obstacle. For all the strides consumers have made toward buying only sustainably raised meat, there is still a large amount of skepticism about its merits.

“Five years ago, things were very different,” Kavanaugh says. “We were early to market and it showed. It’s taken a while. We kind of hopped along for several years before [sustainable meat] caught up to the mainstream, and now it doesn’t feel so novel. People are beginning to seek out and be interested in it. … Our market hre is better than it was just two years ago.”

Part of what scares people about taking the dive into sustainably raised meat is that the costs are higher, often significantly higher, to buy that meat from a shop like Western Daughters as opposed to a grocery store. But the lesson shouldn’t be that you need to go bankrupt to eat well, Kavanaugh says, it just means folks need to make choices about what systems they’re going to support.

“You don’t need meat every day, and you certainly don’t need meat three times a day,” says the former vegetarian. “In order for meat to be sustainable — and I think it has this chance to be sustainable — it means we have to eat a lot less of it. There’s an educational piece about that and how that makes it a different cost. Something we don’t always talk about is what you’re buying at the grocery store is artificially suppressed, because we pay taxes. Our [small-scale] farmers and ranchers aren’t getting those subsidies. We have a rancher who qualifies but refuses to take them.”

Indeed, Kavanaugh views her shop as a way to tell the stories of ranchers who have taken bold steps to improve their processes. The only way to support that isn’t via a Facebook like or to buy a couple pumpkins at the farm, it’s to fundamentally change the way we eat and view the rancher as part of the community.

“We built Western Daughters to be this portal between the urban and rural environment, and to give both sides a chance to learn a little bit about one another,” Kavanaugh says.

Western Daughters sources fatty grass-fed beef, which she says helps bust the misconception that grass-fed beef is gamey and “not really palatable.” Her job, and Curtiss’ job, is to use the whole animal, creating cuts you wouldn’t find in the grocery store, and to teach consumers about why it’s important to eat those parts: Not only does it ensure sustainability for the environment and the rancher’s operation, but it often leads to a greater connection to the land and animal for people cooking at home. Plus it tastes good.

“There are only so many muscles in a cow, and we’ve been doing this for thousands of years, so we’re not going to discover magical muscles. Being a whole animal butcher shop, we’re definitely focused on economy and doing things well, but we’re not as focused on speed as those packing houses that are just mowing through stuff. We’re pulling muscles that aren’t worth it to them to pull.”

Western Daughters not only supplies raw cuts of animals, but they have a sausage program to use some of those off cuts, and their prepared foods, like Bolognese sauce and bone broth, are popular.

Look, you gotta do what you gotta do when it comes to buying groceries, and the efforts by Western Daughters and other sustainable butchers aren’t meant to be a sanctimonious slap on the wrist. Simply providing the option of well-raised meat is the goal Kavanaugh set out to accomplish when she first had the idea to change the food system from within. The hope is that you go there once, enjoy it, go again, and then make it a habit.