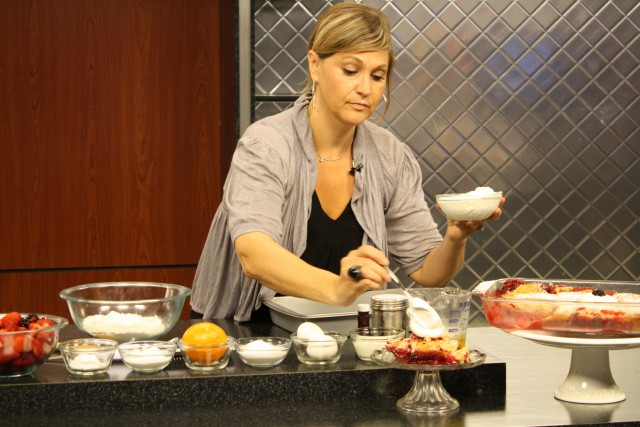 Even surrounded by all the activity
inside the CW2 studio early on a Monday morning, Dessert Diva Danette
Randall finds peace doing what she loves: baking.

With the morning news segment taping
live, Randall works in a darkened corner of the studio on a rolling
kitchen preparation table separating her ingredients for her 8:35 a.m.
segment. After a five-minute warning, her table is rolled to her segment
space and she checks her lipstick one last time.

Under the bright studio lights with
cameras rolling, Randall swirls her Mixed Berry Spoon Cake (see recipe
in this week’s Dessert Diva column), spilling some sugar on the table.

Given the moniker “Dessert Diva” by her
colleagues at the television station, Randall’s personality is as
tangible as the leftovers she passes around once her segment is
completed.

Daybreak Segment Producer Nancy Melear,
who has known Randall for 10 years, says her character is definitely
felt by her loyal viewers.

“I have to admit, the Dessert Diva is one
of the most popular segments we have,” Melear says. “She’s a great
person and adds a lot to this place.”

Randall says she rarely gets nervous for
her weekly segment — as long as she’s baking. The only segments that
make her feel uneasy are the ones where she has to stand still while
interviewing.

“I don’t have to think that much because I
know what I’m doing when I’m baking,” she says. “I’m definitely more
comfortable when I’ve got a dessert in front of me.”

The Washington state native certainly has
no shortage of demand for her treats, filling orders for dessert snack
bars and waffle toppings for Denver breakfast spot Waffle Brothers,
sending recipes out for cookbooks and working on other projects. (She
also writes a column for Boulder Weekly.)

For Waffle Brothers’ Belgian waffles,
Randall provides a Lemon Zinger and Raspberry Cheesecake Swirl topping.
But owner John Power says Randall offers the restaurant more than just
sugary toppings each week; her knowledge of marketing and media exposure
helped give the business a solid footing when it was just starting out.

“She’s very easy to work with and very
easy to get along with,” Powers says. “Once (co-owner Rod Dupen and I)
got started thinking about this waffle idea, her name came into our head
as someone to talk to as a resource. She gives us a little more
credibility, especially since we had just started out.”

Randall’s knowledge of the food business
didn’t begin with an expensive education or even in her mother’s
kitchen. Rather, it stemmed from the enjoyment she found through
expressing her creativity, something she discovered while living on the
East Coast.

“I ended up working and living with these
two gay guys, and they were such good cooks and everything was a
presentation,” she says. “Every time there was a dinner party or people
over, every one was always so happy because they could make even a
turkey sandwich and potato chips look good. It was always about
presentation and garnish. I really became interested and wanted them to
show me things.”

Wanting to learn more about the
intricacies and details involved with cooking encouraged Randall to
start experimenting with recipes and helped her land her first
restaurant job at age 22 in New Jersey.

Randall says even though she began in the
front of the house, she loved being involved so much that she worked
her way up on staff, ultimately helping run the restaurant.

“I just loved the atmosphere, the stress
of it,” Randall says. “It’s fun, but it’s also stressful. That’s when I
knew that I wanted to be involved with food. Plus, I’m a yapper, so I
got to talk to people and really liked that.”

Creating connections with regulars and
families in a restaurant setting inspired Randall to co-own a restaurant
when she moved to Colorado. Randall was a part of the now-closed Soda
Rock Café, a soda shop-type location near Washington Park in Denver.

“I like the connection with the people,
and I like the creative outlet it gives you to make choices,” she says.
“You know, you get to come up with the menu and do fun stuff — basically
making people happy and making something they love.”

Despite the positive connections and
feedback Randall says she receives, she’s realistic: Not every encounter
with readers and viewers is a positive one.

Once after being recognized while dining
out with her friends, she was approached by a family that said they
loved watching her segment. The woman shared how she loved to make her
recipes, then told Randall how it looked as though Randall had gained
weight.

“I said, ‘Well, I’m the dessert diva! I have to test all my product to know it’s right,’” Randall says.

While Randall doesn’t plan on owning her
own storefront anytime soon, her existing partnerships with those in the
food business will likely continue, she says, since her passion for
baking only grows stronger.

“I’m engulfed in sugar,” Randall says. “I feel like I have a sweet tooth just coursing through my veins.”