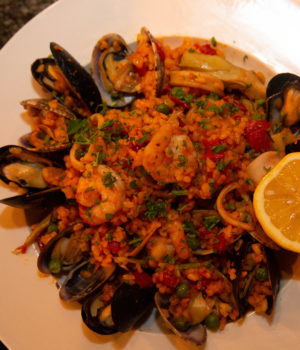 That’s not some old Spanish saying. It’s a fact. Paella isn’t something delivered by DoorDash that you ingest while watching a new episode of the Colorado-situated Resident Alien.

Spain’s most famous dish is revered as a social gathering centerpiece. It is made to be eaten with others as soon as it emerges from the kitchen in the paella (pie-ay-uh), the thin steel cooking pan. Spanish bomba rice slowly absorbs broth and flavor in the pan from olive oil, smoked pimento paprika and vegetables crowned with various meats and seafood.

Paella is barely stirred in order to create the signature socarrat. Yes, the Spanish even have a word for that crunchy, snackable caramelized rice that sticks to the bottom of the paella pan.

The paella experience is built around waiting for it to cook—up to 45 minutes—so you hang out, nibble tapas, and sip red and white Spanish wines.

Paella has steadily creeped into Boulder County’s culinary awareness over the past decade or so thanks to a few dedicated chefs. Many locals know authentic paella because they’ve attended outdoor events where legendary chef and caterer Antonio Laudisio holds court over a gigantic round pan.

Other eateries occasionally feature the dish, but we talked with chefs at Dagabi Tapas Bar, Piripi and Cafe Aion, where paella is showcased with individual approaches to making and serving it.

Learning the joy of paella

Antonio Rullo grew up with paella in Toledo, Spain.

“I’m making the food of my country,” says the chef at Dagabi Tapas Bar. He has served paella daily for 14 years since the North Boulder eatery turned from Italian to Spanish fare.

Paella is a flavor canvas, not a specific recipe, and Dagabi offers three variations. One is topped with chicken, pork and Spanish chorizo. The seafood variety usually includes mussels, clams, shrimp and calamari, Rullo says. The popular vegan paella is topped with in-season produce plus giant white beans and wild mushrooms.

“Every region of Spain has their own paella. Every single one is different. Some places use lamb and mushrooms. You also get game like rabbit and duck. Sometimes we make a black paella using black rice,” Rullo says.

Paella is still new to many diners, as is the time required. “Every night, paella is about education, introducing diners to the experience,” says Noah Westby, co-owner of Dagabi.

Argentinian by birth, Meyer fell in love with paella when he was working as a cook in Spain. “Paella means everything—it’s family, food, a social event,” he says.

Meyer doesn’t take paella lightly and only serves it on the first Monday of the month. “It’s unique. We shut down the regular menu and just serve paella all day. It takes all my fires. You can’t pre-make it,” he says.

The paella chef has to be vigilant. “You have to watch how the rice absorbs the liquid—not too much—and control the heat to get the socarrat right,” Meyer says.

“I try to be true to the paella culture,” Meyer says, adding that Piripi often offers live flamenco music on Paella Mondays, which typically sell out weeks in advance.

Many locals have sampled paella made by Chef Dakota Soifer at Cafe Aion’s booth at the Boulder Farmers Market. He also serves it every night at his restaurant on the Hill, but the eatery was strictly oriented toward tapas and wine when it opened. Then, Soifer was given dozens of paella pans from a defunct restaurant in Boulder. There was only one catch.

“I started out from zero because I had never cooked paella before,” Soifer says. “I started studying and experimenting. I loved learning how to cook it properly, and now we’ve been serving it for 11 years.”

Soifer urges paella consciousness. “I tell diners, ‘It’s going to take about 40 minutes and you can’t get around it. It’s part of the experience, so relax with some tapas and wine.’ If someone is trying to make a 6 p.m. show at Macky Auditorium, we can start it ahead,” he says.

“We make paellas individually from scratch so it’s challenging. You can’t set a timer on the microwave,” Soifer says. But, “paella is fun and people love it. It strikes that balance between familiar and exotic dining.” Soifer admits some first-time paella diners have complained about “burnt” rice.

And yes, there may be leftover paella the next day. “It’s really good reheated the next day with an over-easy egg on top for breakfast,” he says.

Rocky Mountain Tap & Garden has opened at 1071 Courtesy Road in Louisville with self-pour beer taps and a full restaurant menu. . . Boulder Spirits is releasing a special 500-bottle batch of American single malt whiskey on March 12 benefiting the Marshall Fire survivors. It is bottled at 108.4 proof, in recognition of the 1,084 homes destroyed. . . Denver Restaurant Week, March 11 to 20, features fixed price dinners at dozens of eateries including Cafe Aion, Dagabi Tapas Bar and Jill’s Restaurant in Boulder, The Melting Pot and Via Toscana in Louisville, and Broomfield’s Hickory & Ash. Menus: denver.org/denver-restaurant-week

“She peered into the dish, with its shiny walls and its confusion of savoury brown and yellow meats, and its bay leaves and its wine, and thought, ‘This will celebrate the occasion.’” —Virginia Woolf, To the Lighthouse