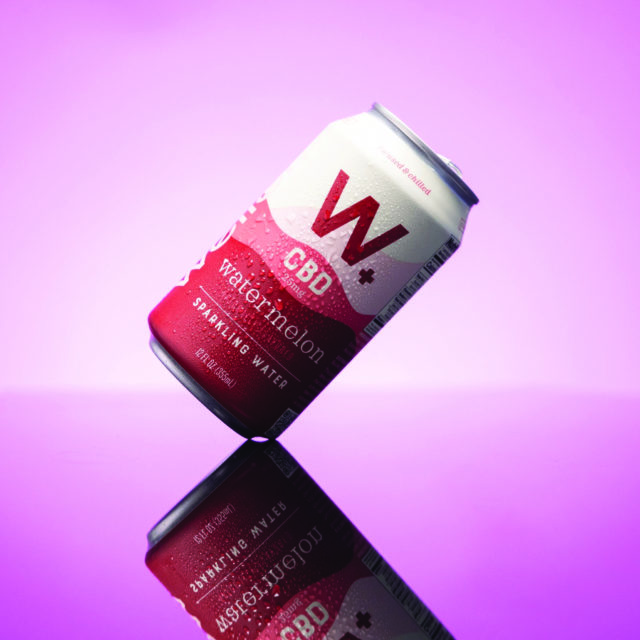 For John Simmons, co-founder of Boulder’s Weller drink company with Matt Oscamou, one moment on Pearl Street captured the changing CBD reality. “We were walking on the Downtown mall, and there was a mom strolling hand-in-hand with a four-year-old, and mom’s sipping a can of Weller CBD,” Simmons recalls.

That was the moment the duo realized the public impression of hemp is being transformed from questionable cousin of weed to a wonder substance used by ex-athletes and a population plagued by aches and stress.

Introduced in 2018, Weller’s CBD Sparkling Water varieties (flavors: black cherry, tangerine and watermelon) each contain 25mg of CBD per can, with no calories or carbs.

CBD is “cannabidiol,” the non-psychoactive cousin of THC—it doesn’t get you high. The FDA warns companies making CBD products not to claim to “mitigate, prevent, treat, diagnose or cure” a disease or health condition.

However, from Boulder to Durango, companies are canning functional beverages featuring CBD, vitamins, herbs, and terpenes (chemical compounds that give plants, like cannabis, their smell) to enhance energy, immunity, calm, and recovery from exercise.

“The first time I tried CBD, I could feel the effects relatively quickly—stress relieving and feeling harmonious. We felt CBD was something that would affect a lot of people in a positive way,” says Matt Oscamou. He and Simmons, two veterans of Boulder’s natural foods industry, launched Weller in 2017, a year before debuting their three CBD-infused drinks.

“We wanted to put out flavors that are going to be approachable to folks in Middle-American towns, not just in natural[-food forward] places like Boulder,” Oscamou says.

Salida’s Dram Apothecary has a decade-long reputation for crafting artisan bitters, syrups and switchels used in cocktails at bars and at home. It took some convincing for Brady Becker and Shae Whitney—the Dram co-founding couple—to launch Dram’s Adaptogenic Sparkling Water with CBD.

“I was wary. There was been a fair amount of fraud in CBD drinks. Some contained none at all, so you really need to know the source of the CBD being used,” Whitney says—but once she tried it, she was convinced.

“I’m someone who has a lot of anxiety. I don’t want to make huge claims, but I found that CBD really helps me. It’s almost as effective as a Valium, much safer and you can use it every day,” she says. “Right now, people really like to buy CBD products to treat something specific, whether it’s supporting energy or turning down stress.”

And don’t assume this rose-scented beverage is used primarily by women. “You would be surprised. We get a lot of bodybuilders and guys who are into [the] keto[genic diet]. People who exercise hard use our drink as a recovery beverage,” she says.

Dram’s Lemongrass Sparkling Water is made with eleuthero (a type of ginseng) and schisandra (a medicinal berry) that can boost energy and concentration. The Sweetgrass variety is made to calm nervous systems with its infusion of mint, ashwagandha and skullcap flowers. Dram also offers a sparkling tart switchel made with apple cider vinegar and CBD.

Dram’s great-tasting Gingergrass won a 2021 Good Food Award (the Oscars of the American artisan food and beverage world), creating a cause for the history books, as Dram became the first-ever awardee for a CBD-infused food. With ginger, amla, rhodiola and chaga mushroom, Gingergrass may reduce inflammation, defuse stress and also settle queasy stomachs.

“Some people feel like they were leaning on alcohol a little too much the past few years, and they’re looking for an alternative,” Whitney says. “They don’t want to feel left out. With CBD drinks, it still feels like I’m having a substance, but it’s not going to leave me hungover.”

These aren’t quite considered “mocktails,” which are tasty, refreshing and missing something. “Many people are having ‘dry’ months, but still want a beverage to relax with,” adds Weller’s Simons.

For Weller’s Oscamou, he’s looking forward to how hemp becoming mainstream continues to expand the universe of CBD users: “Now our consumers range widely in ages. There is a nice elderly woman in Kansas City who calls me every time she wants to place an order for her Weller CBD drinks,” he laughs.

After the Fire, Growing Again

Boulder’s Altan Alma Farm on South Boulder Road (established in 1997) was wiped out by the Marshall Fire. If you enjoyed the farm’s products—including its Szechuan Button Salve and the 32 varieties of micro-greens and bedding plants that were also sold at the now-closed In Season Local Market on North Broadway—Karim Amirfathi has moved his family farm business to 5555 Highway 66, Units 2 and 3, in Longmont. Call 303-437-1288 or email altanalmaseed@gmail.com before you stop by.

The rustic Gold Hill Inn, poised in the hills west of Boulder, opens for its 60th season on April 29. … Coming soon: Avant Garden, a high-end vegan eatery from New York City, located in a portion of the former Mediterranean Restaurant (The Med) space on Walnut Street. Hopefully, it won’t get confused with Avanti or Amante Coffee, both located nearby. Other coming attractions: Efrain’s of Boulder Mexican Restaurant, 2480 Canyon Blvd., in the former Shine Restaurant location; The Daily Donut, Estes Park; North Public Market, a proposed food hall at Arapahoe Avenue and North Public Road in Lafayette

“Maybe a person’s time would be as well spent raising food as raising money to buy food.” —Frank Clark