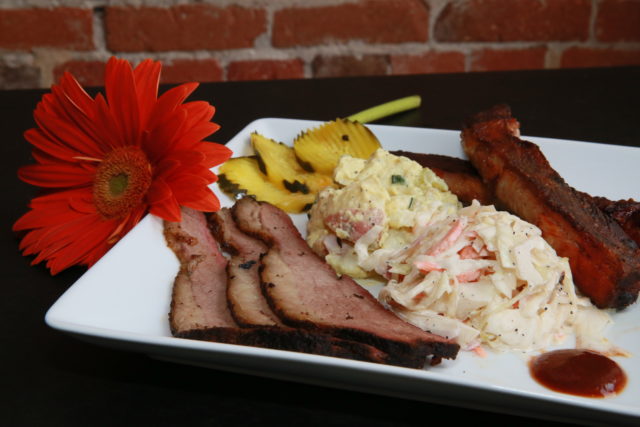 For a place that’s only been open for eight months, The Ghost BBQ and Spirits has more stories than some places that have been open for decades.

Maybe part of that is its owner, Bob Sargent, a veteran of the restaurant business who’s done everything from bussing tables to cooking food to opening his own catering business (Savory Cuisines Catering in Boulder). Sargent opened The Ghost in November 2015, but the stories begin well before the first customer sat down for a plate of smoked meats and potato salad.

First off, Sargent never intended for the restaurant to be a barbecue joint. Located right next to the Boulder Theater (in the space that had been George’s Food and Drink), Sargent had hoped to replicate the kind of success he had when he was cooking bar food for Avery Brewing. But the tiny kitchen in the building on 14th Street wasn’t going to accommodate Sargent’s plans, so he started to rethink the concept.

“So I was looking at the brick [walls inside the dining room], and it had a lot of blues pictures, and I thought, ‘This feels like a barbecue place,’” Sargent says.

And so he set out to find the perfect smoker. Without an endless supply of money, Sargent had to find a smoker that would get the job done at The Ghost without breaking the bank, and one day, as if by the grace of the barbecue gods, a smoker popped up on eBay that was within Sargent’s price range.

The company he found was Heartland Smokers and Cookers out of Sikeston, Missouri, and the owner told Sargent he could build a customized smoker for him within three weeks.

Three weeks passed and when Sargent called Heartland to check on his smoker, there was no answer. He let another few days pass. Still no answer.

“I’m still not being mean at this point because I’ve already sent the guy a check,” Sargent says.

It turned out the owner of Heartland had been in the hospital, and he called Sargent to let him know that he’d make sure his guys were working on the smoker.

For another two weeks Sargent tried to plan a trip to Missouri to pick up the smoker, but every time he called, the owner of Heartland told him, “Sorry, Bob, it’s just not ready.”

It was suddenly the beginning of October — weeks past the estimated opening date for The Ghost. Sargent called to tell the owner of Heartland that he’d be in Sikeston on October 16.

“I’d rented a truck I wasn’t even sure the smoker would fit in,” Sargent says. “I get up in the morning and drive 16 hours to Sikeston, Missouri, by myself, through Kansas. I call him, and he says they are gonna finish it today.”

But when Sargent arrived, the smoker still wasn’t finished. All the parts had been constructed and painted but not assembled together. Sargent said he wasn’t leaving Sikeston without his smoker. So the owner called a friend to help him put the rig together.

“And it’s an event. The whole town comes, his father-in-law comes,” Sargent says. “People are asking me questions in these thick southern accents. I don’t recognize half of what they are saying. I’m just praying that my smoker will get done.”

And it did get done. They loaded it into the rented trailer and closed the door with an eighth of inch of space to spare. With the smoker strapped in, Sargent drove another 16 hours back to Colorado, where he got the smoker forklifted out of the trailer and into the courtyard near The Ghost BBQ (the smoker would ultimately be moved two more times, but that’s another story).

As Sargent weaves this yarn, I’ve been enjoying a sampler of chicken wings, a spare rib and brisket, all prepared in this infamous smoker. Everything has been cooked low and slow in the Texas style, spending a few hours in the smoker before being wrapped and placed back in the smoker to finish. The seasonings are minimal, mostly salt and pepper, to allow the flavor of the hickory smoke to take center stage. The rib meat falls away from the bone with minimal force. I’m a mess as I try all five of the in-house made sauces, dragging chunks of brisket through each sauce to see what it’s all about. I tell Sargent everything is “ridiculously amazing,” then pause and say, “Maybe I’ll say something a bit more eloquent in the paper.”

“No, no, no,” Sargent says, waving his hand in protest. “We’re reaching a barbecue audience here. Ridiculously amazing is what we want.”