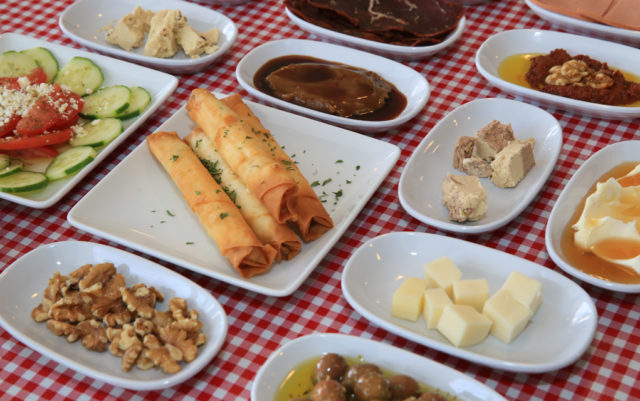 Sometimes even a self-professed breakfast fanatic gets sick of the same old thing, especially during the summer. If I have to face another fiber-full bowl of fruity-nutty oatmeal I’ll scream. Even going out for ’cakes, eggs and bacon doesn’t push the same buttons it does in February.

Rather than skip it entirely, I’ve been pushing the envelope breakfast-wise. Duty, dietary belief and habit be damned.

Stopping by Breakfast Champion, Boulder’s Turkish cafe and bakery, reminded me that there is an alternative universe where people linger over breakfast.

The eatery earns its name with the Turkish Breakfast that is designed for two people to share. A metal tray boasts a piece of cheese, boiled eggs, some olives with tomato and cucumber. There are thin-sliced pastirma — dried spiced beef — and rounds of salami with walnuts and red pepper relish and a filo-wrapped cheese roll. The coffee or tea keeps coming as you spread cardamom-scented, sesame-seeded bread with honey, clotted cream, Nutella and jam.

The French know nibbling, too. Le French Café (near McGuckin Hardware) serves good quiche, omelets and crepes, but I went for Le Petit Dejeuner. That simple, satisfying ritual offers a freshly baked half baguette and a plain croissant with butter and jam to contemplate with milky coffee.

Once I got on a roll, it was easy to find another world of meals people eat in Boulder before 9 a.m. I could have chosen more conventional huevos rancheros but I took the barbacoa and al pastor tacos instead at La Choza on North Broadway. We’re talking two warm, soft corn tortillas wrapped around bites of juicy, fall-apart shredded cheek and marinated pork with pineapple, respectively. Topped with tomato, chopped onion and cilantro, and dressed with any of the five salsas of varying heat levels, these were a whole different kind of eye-opener.

At the Boulder Dushanbe Tea House, I rediscovered what a great hash brown alternative rice can be. The breakfast fried rice is sautéed with pork belly, chopped green onions, carrots, onions and peas with a craveable char sui glaze and an over-easy egg as “sauce” on top.

The summer’s not over. I hear congee is on the menu at Aperitivo in Gunbarrel. That’s Asian rice porridge in a savory broth with ginger, green onion, crispy garlic, mushrooms and a poached egg. And, at Ado’s Kitchen on the Hill the folks dish breakfast pupusas and sweet, caramelized plantain with mashed beans, Salvadorian crema and eggs.

Contrary to advertising, a so-called “good breakfast” is really a wide range of omnivorous possibilities. Some chilly morning in September, that bowl of warm oatmeal with fruit and nuts will sound just perfect again.

A company called Epogee is trying to sell food fat replacers called EPGs (esterified propoxylated glycerols) which can cut calories and fat by up to 92 percent “without impacting taste or texture.” This has been tried before. Google “Olestra gastric distress.” … Horchata, sesame, whiskey, salted caramel and unicorn ice cream flavors saw the most sales growth in 2018, according to Square. For the record, a unicorn is a belief system, not a flavor. … I may be more millennial than you. I took the “How millennial are you?” online quiz. Since I’ve tasted avocado toast, quinoa, pumpkin spice lattes, matcha cake, poke, La Croix, overnight oats, sushi burritos, rolled ice cream, rosé wine, bone broth, almond butter, boba and a waffle sandwich, I was rated “YAS almost millennial.” It was research, not hipness. I only missed a few items such as a unicorn Frappuccino and a rainbow bagel. … Umami is big this year. Innova Marketing’s top 2019 flavor trends (for older folks) include non-sweet “earthy tones” like matcha, seaweed and dried mushrooms.

How to Smoke an Egg

If you are settling for just smoked bacon in the morning you clearly aren’t smoking enough. To smoke eggs, preheat your pellet smoker to 225 degrees and place a dozen eggs (or less) on the grill or in a pan. Cover and allow them to smoke for about two hours to get hardboiled eggs. If you like them softer, pull them out earlier. To stop the cooking put them in an ice water bath, which also makes them easier to peel.

I didn’t realize I knew zilch about baklava until I visited the Istanbul Cafe and Bakery in Denver. Forget the cookie-cutter version you find so often at restaurants with a few layers of walnut-filled filo dough drenched in honey syrup. There are always at least seven baklava variations in different shapes available, and the folks behind the counter are happy for you to sample them all. They include dozens of layers of buttered, see-through filo dough with either chopped or ground pistachios inside. Kadayif uses shredded filo instead of sheets, and Sobiyet involves a cream layer on top of the dough layers, nuts and syrup. The baklava is shipped frozen from Turkey and baked here, and the eatery also produces breads, Turkish rolls and surprisingly chewy Turkish ice cream.

For a lively debate, you can discuss whether baklava was invented in Turkey, Greece, Morocco, Lebanon or any of several other Mediterranean nations that claim it.

“The majority of people still crack an egg and drop it into searingly hot oil or fat and continue to cook it on high heat. Once served up in a pool of oil, it is an inedible destruction of that great ingredient — the egg. Maybe that’s how you like it, in which case carry on serving your disgusting food.” — Chef Marco Pierre White