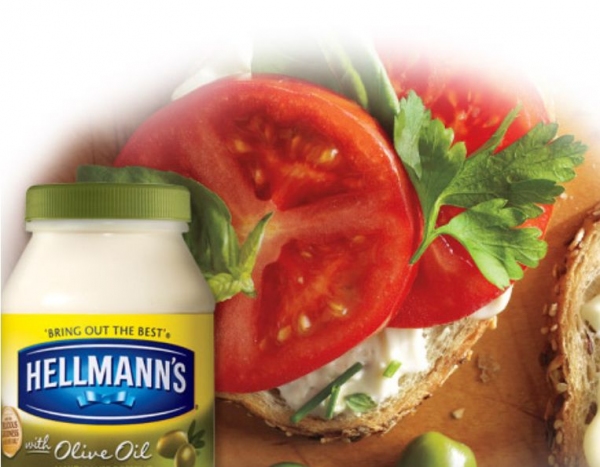 What the popularity of one brand says about the condiment

Mayonnaise is the top-selling condiment in the nation, and is on a trajectory to overtake soy sauce on the world stage. The reasons behind this popularity are diverse and are the subject of much speculation — by me, anyway. While the goodness of mayo largely boils down to the fats and flavors it delivers, there’s a lot of nuance in the special kind of love that mayo makes in your mouth.

No mayonnaise gets around to the degree that Hellmann’s Real Mayonnaise does. Known as Best Foods in the Western U.S., Hellmann’s is the world’s most popular brand of mayo.

It is a creamy, tangy conqueror of bellies, hearts and nations. For many of the world’s mayo lovers, Hellmann’s is like home: They may range far and wide, making their own or buying boutique brands, but they’ll always come back to Hellmann’s in their hour of need.

Having just celebrated its 100th birthday last year, Hellmann’s is the nation’s, and world’s, oldest commercially produced mayo, just edging out Duke’s, which was established in 1917. Made with yolks, rather than whole eggs like most other mayo makers, Duke’s remains a favorite in the South, but its distribution elsewhere is scarce.

“Part of Hellmann’s popularity can be attributed to its sheer market dominance,” says Dr. Debra Zellner, a food psychologist at Montclair State University.

“People tend to be a bit neophobic (are afraid of new foods) and like the familiar (the more familiar the better),” she says. “They will tend to like, and therefore choose, products with which they are familiar.”

Advertisers are all too aware of this, knowing that  if they hook someone on a product early on, they might keep them for a lifetime, and even pass along their preferences to their children.

While this is most certainly true in the case of Hellmann’s, it didn’t become the world’s favorite mayo by accident.

Joanne Seltsam is a professional taster with Sensory Spectrum, Inc., a consulting firm that focuses on how the senses relate to consumer purchasing decisions. Seltsam specializes in descriptive analysis, or the identification of sensory attributes and their intensities in food. She considers Hellmann’s a rare, high-quality product, a member of an exclusive group of products that are so refined and sophisticated that it’s hard for the average palate to break them down into their component flavors.

“The tribute to Hellmann’s is that it is so difficult for even a trained person to break down, to find the line between where one attribute stops and the other starts,” Seltsam told me. “It’s what we would call a ‘beautifully made product.’ It just tastes like mayonnaise. All the flavors blend together. They’re balanced. Nothing sticks out. Everything is appropriate. …Hellmann’s is just so interwoven that tasters have a very difficult time saying anything other than ‘it tastes like mayonnaise.’”

“Hellmann’s is the perfect gateway mayonnaise,” says Scott Jones, chef de cuisine at No. 9 Park in Boston. A mayo-loving chef, Jones is also a mayo lover’s chef, dressing up many of his dishes with customized versions of the special crème. But he always starts with the basics, he told me, aka Hellmann’s.

“When I make mayonnaise at work, when it comes out looking like Hellmann’s, I know I’ve done it correctly.”

Using a Hellmann’s-like base as a point of departure, Jones proceeds to dress it up according to the nature of the dish. It may end up as sherry aioli, plankton saffron mayo, or some other whimsical, delectable flavor. I asked him what it is about Hellmann’s that makes it so special in the hearts of so many mayo lovers.

“[Its] perfection is largely derived from its consistency, texture and sweetness,” Jones told me. “Always the same, the texture is similar to pudding, and it is always a touch sweeter than I expect it to be. All of which makes it immeasurably approachable.”

This approachability, as he calls it, is key. Because for all of the seemingly boundless love we have for mayo, a significant portion of the population despises it. With a passion. For a host of reasons, ranging from texture, to flavor to its very existence. Thus, the extent to which it’s possible to make Hellmann’s, or any other mayo, less offensive is as important, from a sales perspective, as making it delicious.

In the case of Hellmann’s, there is no taste of oxidized oil. It’s not too sweet or sour. But neither is it bland. It has personality, zing, and the inscrutable quality known as “amplitude.” In a 2010 New Yorker piece on ketchup, Malcolm Gladwell wrote that amplitude is “the word sensory experts use to describe flavors that are well blended and balanced, that ‘bloom’ in the mouth. … When something is high in amplitude, all its constituent elements converge into a single gestalt.”

Seltsam compares Hellmann’s amplitude to that of Coca-Cola: Both are flavors that many can identify but few can describe.

I wondered if Hellmann’s, like Coke, is made according to some special, closely guarded secret that is crucial to its success, some formula or process that sets it apart from the competition.

“Hellmann’s is simply a recipe that people want to eat,” Hellmann’s senior marketing director Brian Orlando told me in an emailed response to that question. “After a century, we’re pretty proud to say that slight recipe tweaks have been made throughout the years, but eggs, oil and vinegar have always been three primary ingredients in Hellmann’s Real Mayonnaise.”

It’s not rocket science, but in the end, that may be the secret to the success behind America’s mayo of record.