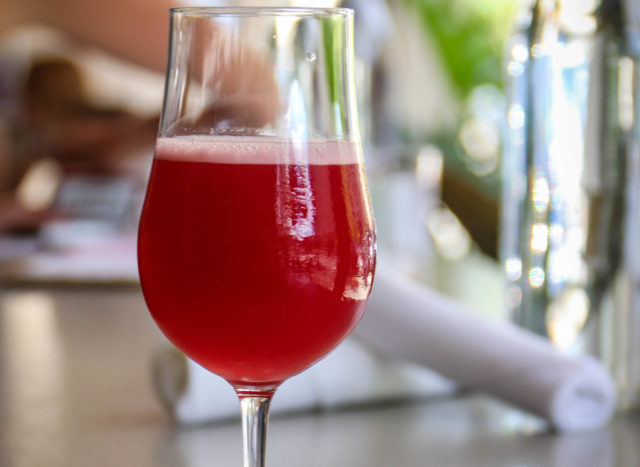 Three years ago, Jordan Burghardt left his post as beer director at The Kitchen to help build a beverage program from scratch at Arcana, which was getting ready to open. At the time, Burghardt knew plenty about beer and wine. But the restaurant’s focus from the onset was to highlight the roots of American cuisine, and that meant Burghardt had to learn about one quintessentially American beverage that has since grown rapidly in popularity: cider.

“Arcana was looking to do American heritage cuisine. Something that goes hand in hand with that is cider. It was one of the first beverages being made here in the U.S. Johnny Appleseed and all that,” Burghardt says. “When we started three years ago, cider was looked at more as an alternative to beer, as a gluten-free option. There were a lot of products that weren’t good, like apple juice, more or less. Not complex or interesting, and often regarded as sweet. That’s not the case anymore. Cider is a fermented fruit beverage so it should be treated the same as wine. It’s been fun to grow [our cider program] and find producers treating it as such.”

Burghardt set about creating Arcana’s cider program by doing research — tasting a lot of cider from distributors and reading about the methods of production, apple varieties and regions of production in books and online. What he found early on is that wine distributors often had one or two ciders, mostly from Spain or France, that they tend to find by happenstance on trips overseas. Those cider imports still find their way onto Arcana’s cider list, but now the majority of the two dozen ciders available on tap or in cans/bottles are produced domestically — indicative of how quickly the U.S. cider scene has been rebuilt.

Burghardt says the apple trees used for cider grow well in cooler regions — the Pacific Northwest, the Northeast and Michigan — and Arcana’s cider list includes several selections from top producers in Vermont, Oregon and Pennsylvania. One challenge with the state of cider in the U.S., though, is that a lot of what Burghardt deems to be the really good stuff is produced in such small batches that it’s hard for any restaurant, let alone one hundreds or thousands of miles away from the cidery, to get their hands on it.

The problem is not unique to Arcana.

“You see, in Washington, D.C., there’s now a cider bar, there’s one in New York City, there’s one in San Francisco. Full-on cider bars with 100-plus selections. When those areas have things like that, it helps educate the public, and people get excited about cider, but it means demand is higher than supply,” Burghardt says.

In fact, there’s reason to believe Colorado, and Boulder County, could become an epicenter for the new age of cider production, the promising debuts of our cideries notwithstanding. Historically, Boulder County has been fertile ground for apple orchards — you can still see the remnants of many of these orchards driving around — and a CU project is attempting to catalog the varieties that have proved hardy enough to survive years of neglect and the Colorado climate. The Boulder Apple Tree Project asks anyone interested to help catalog these trees, which can come in thousands of varieties.

That diversity is good for cider. Burghardt says apples are one of the most biologically diverse crops, and trees that produce bitter, sour or tannic apples that might be tough to eat, actually make for good cider. (Johnny Appleseed wasn’t planting trees for snacking apples, he was planting cider orchards, after all).

Burghardt says there are further differences in how cider is fermented — Spanish ciders tend to be funkier and yeastier, while American ciders tend toward crisp, clean and carbonated. The flavors that emanate out of those techniques span “a pretty wide gamut,” Burghardt says.

Although cider-making is being treated with the same attention to detail as wine-making, there may be a compulsion to consider terroir in cider — the unique taste and feel created by a specific region and climate. But, Burghardt says, apple trees don’t interact with soil and weather as sensitively as grapevines, so the effects of a cider’s origin are muted, compared to wine.

When it comes to serving though, Arcana treats cider like wine (as opposed to beer, or a whole other entity). Burghardt says he’s seen regulars who typically order high-end wines switch to delicate French ciders, often as an aperitif that mimics Champagne, for instance.

Burghardt says although cider has boomed in relatively quick fashion, it’s not a trend. The quality is too high.

“I don’t think it will go away, but I think it’ll eventually level out,” Burghardt says. “I feel like the craft beer boom, there are still a ton of breweries, but it’s not growing as quickly. Cider’s going to continue to grow for a while. People are going get excited about it and want to try new ciders.”

Visit arcanarestaurant.com to view the restaurant’s cider list, or to reserve a spot (space permitting) for the March 28 cider diner.