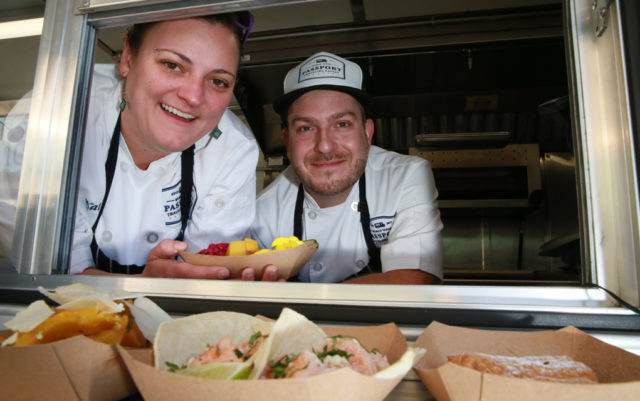 Roy and Kat Brown had an interesting honeymoon. Instead of lounging on some exotic beach or viewing fine art in Europe’s storied museums, the Browns quit their jobs and went on an indefinite trip around the globe. They had no deadline to return nor any real accommodations booked. But they did have a hefty chunk of savings. And they had one credo that would guide them through the world: eat everything.

Nearly 100 cities, 30 countries and eight and a half months later, the Browns returned to Boulder with memories of hundreds of dishes they’d eaten from Thailand to Iceland.

They almost didn’t make it back.

“We were pretty confident we were going to come back,” Roy says. “But we fell in love with a couple spots, and there were just times when we were trying to figure out how to move to Thailand. It’s just not easy … but we definitely flirted with the idea for a while.”

Luckily for us, they returned, and shortly thereafter launched the Passport food truck with the mission of sharing the dishes they tried elsewhere with the Colorado community — if they couldn’t live abroad, they’d bring the fruits of the world to the Front Range.

Like most love stories, the couple’s relationship began hands-deep in fish. Roy was training Kat, who had just finished culinary school, on the fish station at Flagstaff House. Kat, as it turned out, would pick up Roy at the bottom of the hill every day and drive him up to the restaurant. Sparks flew somewhere within this arrangement, and when Roy moved onto The Kitchen a year later, Kat followed a couple months after. And right before they got married, they quit the restaurant and prepared for their wedding and honeymoon.

In bizarre, meaningless symmetry, the Brown’s culinary trip around the globe began hands-deep in fish, too — a trip to see the best that the food world has to offer can’t really start in a better place than Tokyo’s iconic Tsukiji fish market.

“We got there at four in the morning only to discover that that’s actually too late,” Roy says.

So what, they missed the big entertaining auction of fresh seafood. What they got instead, on only day two of the trip, was one of the highlights of their journey — a steaming bowl of ramen on a frigid January day, loaded with pork and rich broth. It was the start of what became a common theme throughout their trip: no matter the circumstances, good food can salvage most situations.

Like the time in Thailand when the two and a couple of friends sat on a covered raft in the middle of a lake during a downpour, but ate and drank throughout the afternoon. Kat remembers a mashed papaya and carrot salad with a fish sauce so fresh that whole fish heads were hanging out of the sauce’s jar. Or when, later in the trip, they realized that to drive north to south through Croatia means you have to drive 20 miles through Bosnia.

“This is so bad, but we got to the border and they’re like, ‘You need your passport.’ And we’re like, ‘Where are we?’” Kat says.

“I didn’t want to ask the guy, ‘Where are we,’ so we looked at the sticker when we left and said, ‘Oh, we’re in Bosnia.’ We stopped and had lunch,’” Roy says.

The wrong turns on trips tend to make the best memories. And sometimes the things you do intentionally make for bad outcomes. Sometimes that involves eating guts at a restaurant in Lyon, France.

“I had a five-organ stew,” Kat says. “Hearts and brains and kidney and liver and something else. Normally I’m OK with [offal] one by one, but when it’s a whole thing… mentally for me, I couldn’t eat that much innards.”

“The capper for me was I had tripe. So it was tripe in a cream mustard sauce and the flavor was amazing, but it was wrapped in another piece of tripe, and you’d cut it open and the intestines would pour out of it. Again, the flavor was amazing, but I could do about three bites and it was quite literally, ‘I’m eating intestines as they’re coming out of more intestines.’ The server was like, ‘Can I get you anything else?’ and I said, ‘No, you did it perfectly. I chose that.’”

Viewing food as an opportunity for adventure is something both Roy and Kat grew up with. Roy’s family had a rule where each person had to cook dinner one day a week. Slowly that grew to five days a week when his sister went off to college and Roy tired of his father’s “horrible” cooking, providing Roy the chance to test the boundaries of his culinary skills. Kat had an aunt who went to culinary school, so she’d teach Kat and her relatives how to make any dish they chose — fittingly, Kat often chose “the weirdest, most outrageous thing from a different country and she’d teach us how to do it.”

In order to pull off such adventures as adults, the Browns had to have some core foundation that enabled them to adapt to new, sometimes stressful situations on the fly. It’s likely something Roy and Kat learned to do in the kitchen. And now their travels abroad have likely prepared them for the new stressors of operating a business and working in a mobile kitchen together.

“We work better together than apart,” Kat says. “That sounds super cheesy, but we work really well together, you know. I think just like normal people we do argue in the kitchen but that’s just because it’s a kitchen and that’s what you do.”

“We spend 90 percent of every single day together,” Roy says.

“Not sick of each other at all,” Kat adds.

“There’s definitely days where one’s pissed off at the other and it may follow into work, but for the most part work is work. We may yell at each other in the heat of the moment trying to get things done, but we have a standing rule that that doesn’t carry over,” Roy says.

Already after three months in business, Passport is profitable. The menu, true to the couple’s mission, spans the globe with dishes ranging from langos, a Hungarian fried bread and meat pie, to plaa lat phrik, a Thai red snapper and jasmine rice dish, to Indian pani puri, a light fried snack with flavorful chutney. The menu changes daily, and the Browns source their food from local farms, groceries and ethnic markets.

But what doesn’t change is the motivation for Roy and Kat to keep bringing a world of food to Boulder via a humble truck. Eat there enough, and it’ll be like you were on the trip with them.