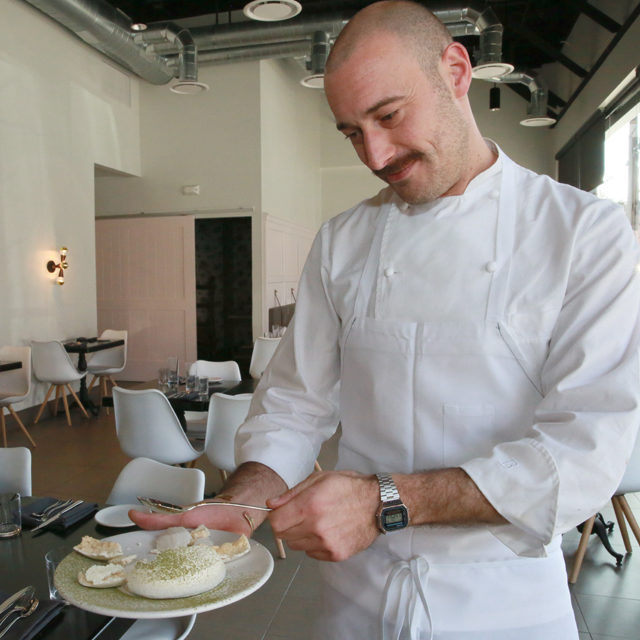 You’ve had a croissant. When you had it, though, did you really consider it? Did you consider how it is that it’s lighter than a dry honeycomb but richer than a butter bog? Or that the unique process of rolling and baking dough with fat comes with about 100 opportunities to drive the proverbial car off the cliff? Or that when you do it at altitude, 100 turns to 200? Or that as the dough rises, the butter fat melts, most of its water turns to steam, and in a process still unresolved by the sciences, air pockets are formed both in the dough and the liquid fat that create wormholes through the dough and stress the browning crust enough to fracture, while the remaining water releases through the pastry’s capillaries and pores?

Or did you just pull it apart and brush flakes from your lap like dandruff?

If you’ve had Jeb Breakell’s croissants at Emmerson, you’ve given it some thought. In a world where reheated croissants stock the shelves of nearly half of the patisseries in France — France — Breakell’s croissant is provocative. It asks really uncomfortable questions, like, “Am I as committed to my craft as Breakell is to his?” and, “If we hadn’t gotten a croissant right until now, what other foods are we missing in Boulder?”

It’s a croissant that challenges complacency. Are you doing enough to get by? Are you committed to perfecting the croissant of your life? Is Boulder committed to finding the equivalently perfect bao bun, carbonara and Dover sole?

Or are we just brushing Pillsbury flakes from our laps?

I meet Breakell one morning in Emmerson’s café. He’s talking about the challenge of baking in Boulder’s dry, high-altitude climate after moving this year from New York City, where he’d spent most of his career.

“It’s incredible how much the recipes do change and how depressed I was originally. I thought it’d be, ‘Here guys, here’s the best chocolate chip cookie in the world,’ and it was like…” Breakell mimics a deflating balloon. “I had to take a walk around the block and come back in.”

To illustrate the point, Breakell grabs a chocolate chip cookie from the marble pastry counter, sets it on a plate and brings it back to the table. It’s a really good cookie. Maybe the best, I don’t know. But you wouldn’t know from tasting it that it took dozens of iterations to make that cookie taste and feel exactly as it had at sea level. To do otherwise would be to fail. And, Breakell says, “I have the biggest fear of failure. That’s why I thrive — because I’m constantly afraid of failing.”

In cooking, at least. Breakell grew up the “poor rich kid” of schoolteachers in the wealthy community of Greenwich, Connecticut. At 14, he got his first job in a German bakery in town selling cookies behind the counter three days a week. It was his first taste of the culinary world, and his first taste of success.

“I never got good grades in my life,” Breakell says. “Terrible student, class clown, troublemaker… real piece of shit. In cooking, I thrived in it. It made me happy, kept me busy, kept me out of trouble.”

Breakell tried going to college in Vermont, but dropped out after realizing snowboarding was more fun than going to class. He returned to the bakery and eventually tried culinary school. With interest in the subject, Breakell found he could keep his nose in a book and his body in the classroom. A broader pursuit into pastry, it turned out, agreed with Breakell’s constitution.

I tell Breakell that the precision of baking is the reason why a lot of people hate it. In cooking, with its tendency to encourage spontaneity, a little finesse can turn variable ingredients, flights of fancy and diner requests into workable dishes. Baking is less forgiving.

“But I was always drawn to the measuring of things,” Breakell counters. “For me, somehow it makes me feel more comfortable.”

Breakell’s affinity for orderliness also applied to his places of work. After culinary school, Breakell spent two years each in the kitchens of three-Michelin-starred Eleven Madison Park and Per Se. And despite the demands of those kitchens, Breakell was able to learn. He had never done a quenelle before entering Eleven Madison Park, but by the time he left, two years and “nine million” quenelles later, with the stakes higher nowhere else in the pastry world on each iteration, he was an expert. He loved it.

“Amazing. Like, just so intense. I loved that. I thrived in that,” Breakell says of working in Per Se. “Everything’s spotless, sparkling. Thomas Keller walks in, runs his finger across the top of a doorway to check for dust is the type of cleanliness we’re talking about.”

Thomas Keller doesn’t have the time or interest to run his finger across the kitchen doorways of Boulder and Denver to check for dust. Nor do we have Pete Wells to rip Per Se in the New York Times, and then have Keller basically agree and say they had been complacent.

But Breakell’s food makes you wonder: shouldn’t we? Or, can’t we? This is the “Foodiest Little City in America,” isn’t it? But throw in Denver and we’re the size of San Francisco; population is no excuse to perpetuate the issues — a need for bolder restaurant concepts, more ethnic cuisine and a food media to support it — that keep Colorado from being compared to food havens from Portland to Nashville to Columbus, Ohio.

“Our croissant is flaky and crispy on the outside,” Breakell says. “Maybe people aren’t used to that. [They say,] ‘Why is that? Is this a stale croissant?’ … People are just trained to enjoy certain things.

“Or the flan, for instance. The original menu opened with shiro miso flan with sake-poached pears and bonito caramel and yogurt. There’s a version of it on the menu, but we took off the bonito caramel because people were like, ‘It tastes like fish.’ Well… it is fish.”

The bonito caramel was a top-fiver for me. It’s hard to describe; I’m no Pete Wells, after all. But it turns out caramel and tuna, under Breakell’s steady hand, take to each other like prosciutto and melon or Johnny Cash and June Carter.

Maybe we’re just building up to it. Hosea Rosenberg’s got venison loin with chokecherry sauce and wild boar empanadas at his new New Mexican joint. The Kitchen is taking its Boulder roots global. Frasca’s as good as ever. Maybe the culture just needs nurturing.

“The more people we have dining here, the more we can … try different things,” Breakell says. “I think everything’s very approachable right now. The black olive shortbread would be probably the strangest unusual treat in there at the moment, but people that have had it like it. I would like that case to have everything look like black olive shortbread.”

The only accomplishment I get Breakell to claim is that he once saw Lionel Ritchie in a clothing store in L.A.

“If you have time to reflect on your career, your career slips away,” Breakell says.

But you can see his accomplishments for yourself. Try his grapefruit and fennel plate, which Breakell lovingly compares to a light display at a Phish concert. It’s joyful, bright and alive, and he builds it with the cool control of an engineer turning knobs on a board — tweezing frozen fennel fronds onto mounds of sorbet, and delicately arranging candied glass to look like light refractions in an arena.

Everything that Breakell’s deceptively simple croissant hides, the magnificent grapefruit and fennel plate shows. This juxtaposition shows the breadth of Breakell’s ability and the depth of his training.

In that gap, exists what can be.