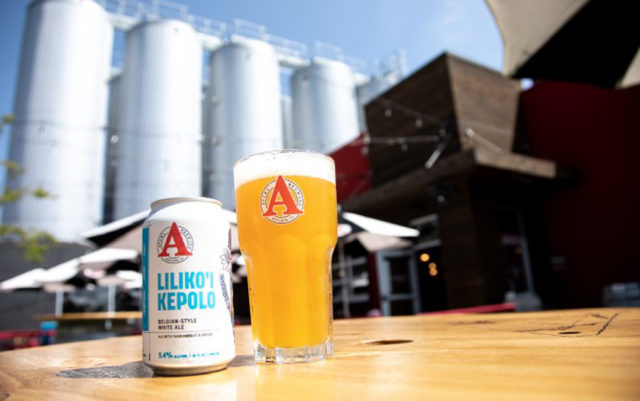 There are two types of beers in this world: the kind you drink after 5 p.m. and those you drink well before. And Avery Brewing Co.’s Liliko’i Kepolo is firmly in the latter.

“I always refer to it as the breakfast beer,” Adam Avery says about his brewery’s award-winning Belgian-style white ale with passion fruit.

Avery’s not alone. Liliko’i Kepolo (pronounced lil-ah-koi kuh-poe-low; it’s Hawaiian for “passion fruit devil”) is a favorite among the pre-noon crowd. If you’ve ever cracked one, you know why: creamy head, rounded body, a hint of spice and a mouthful of tart passion fruit. Drink it when it’s 20 degrees outside and blowing snow, and you’ll think you’re in Hawaii.

That’s where Avery brewer/“barrel herder” Andy Parker first encountered passion fruit in beer. The year was 2000, and Parker was working for Kona Brewing Co. on the Big Island. One of the beers in Kona’s portfolio, a wheat beer made with passion fruit, changed Parker’s assumptions about fruit in beer.

Two years later, Parker relocated to Boulder and joined Avery. At the time, Avery Brewing was synonymous with big beers, but its Belgian-style wit, White Rascal — soft, effervescent with hints of banana, clove and bready yeast — was creeping up as its best seller. And when the calendar turned from the 2000s to the 2010s, White Rascal became Avery’s number-one seller.

“Then, 10 years ago, [Parker] took a little bit of White Rascal — diverted it off to the big batch, put it into a tank and started experimenting with adding passion fruit to create our own tart, refreshing, fruited Belgian wit beer,” Avery says.

Liliko’i Kepolo was a hit with the staff and taproom customers. But packaging Liliko’i for distribution was a no-go. As Avery explains, it took about five years of research and development to get the passion fruit devil in a can.

The hurdles: “Where can we get a consistent supply of passion fruit? … Passion fruit that didn’t coagulate [passion fruit is a citrus fruit with a thick rind surrounding goopy pulp] … And get it into a can without having a bunch of sediment and without having exploding cans.” (Adding fruit juice, i.e., sugar, to a finished product can cause a lot of trouble under pressure).

Fortuitously, the rise of Liliko’i coincided with Avery Brewing’s move from its piecemealed brewery on Arapahoe to its state-of-the-art facility in Gunbarrel. Avery’s brewers made their bones with experimental ales — “jump-the-shark type beers” in Avery’s parlance — but now they were fleshing out the quality-control/logistical side of the operation.

“Then we made the constant improvements to the passion fruit source,” Avery says, “and got to the point where we have shelf stability in a can.”

In 2015, cans of Liliko’i Kepolo finally hit the market. Since then, Parker has adjusted the recipe away from concentrate — which posed consistency issues — to juice, which gives the beer a renewed vibrancy and tempers the richness. Today, Liliko’i is among Avery Brewing’s 10 best sellers. And this past October, the beer took home a gold medal in the Fruit Wheat Beer category at the Great American Beer Festival (GABF). Not bad for an easy, everyday drinker from a brewery known for beers playing on the upper register of what beer can be.

“There’s a beer for every occasion, right?” Avery says. “I mean, you can’t just drink big barrel-aged beers all the time. And I don’t think you can just drink IPAs all the time either.”

But you can drink Liliko’i Kepolo from morning to night. Find it wherever good beer is sold.

Avery Brewing is no stranger to the GABF stage. Adam Avery won the brewery’s first medal in 1994, roughly one year after incorporating the brewery. Out of Bounds Stout was the beer, and gold in the Dry Stout category was the prize. Since then, the brewery has hung another dozen: