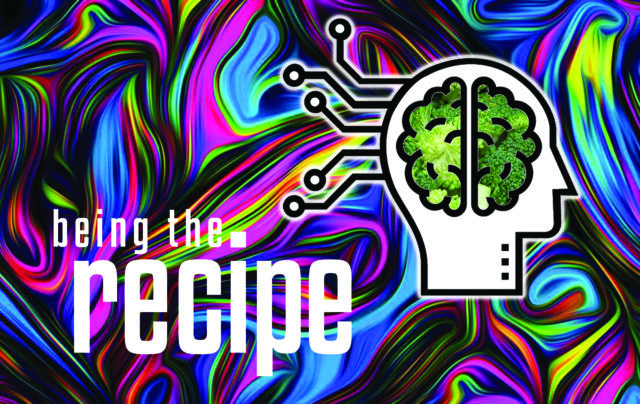 I’ve sometimes been accused of living in my head. At the very least I cook in my head and it spills into the kitchen. It can get pretty messy… and tasty.

Here’s a good example: A writing deadline was on my mind last week, so naturally I was dawdling in the kitchen. It was not time to eat, but I ended up creating a vegan, gluten-free treat along with the requisite paragraphs.

Leaning on a counter, I found myself staring at a bag of unsweetened coconut flakes while I was making tea. It seemed appropriate to put some in the toaster oven because coconut tastes so much better when toasted golden brown. I wasn’t making them for any particular purpose.

I hung out because in the past I’ve gone back to write and suffered cardiac panic when the smoke alarm went off. I spied the mixed nuts from the holidays I had finally shelled while watching a Nuggets game. The oven was hot, so I figured I might as well make the pecans, almonds, hazelnuts and Brazil nuts taste better, too. Toasting them took a lot longer than the coconut, but the resulting coconut/nut aromatherapeutic effect was uplifting.

Later that afternoon I was back against the fridge meditating upon the beauty of caramelization and layers of flavor. Somehow this led to the decision that the toasted coconut and nuts needed to be combined with a veneer of sweet glaze.

There was a problem. I had no honey, maple syrup, sugar or corn syrup, having (wisely) emptied my home of all easy forms of sugar. I am not safe around them. The only sweet thing in my pantry was a bag of aged, unattractive ground date pellets in oat flour that looked like rabbit food or worse.

I didn’t want to just mix the dates with the coconut and nuts. Flashing back to a reference to date syrup in food history, I made my own by microwaving the pellets with water into a thin syrup. I added a little ground cinnamon and ginger and extra virgin olive oil.

I combined the toasted coconut, nuts and syrup. I could have stopped there, but universe told me to add a handful of Rice Krispies. They snapped. They crackled. They popped as I worked them in. I coated a glass pie pan with olive oil, pressed the mixture flat and sprinkled it with a little sea salt because everything sweet is dusted with salt these days it seems. I put it in a 300-degree oven for an hour or so. I did not stir it, allowing it to achieve maximum crunch.

When I experience one of these culinary fugues, I always love that first taste because until that moment I had been cooking conceptually without tasting anything. The resulting 21st-century Rice Krispies treats were crackly yet chewy, deeply nutty and glazed with enough earthy sweetness and spice to be certified crave-able.

If I’d had these ingredients around, too, I might well have added a little butter, nut butter, sunflower seeds, lemon zest, vanilla, minced Granny Smith apple, popcorn or chopped, dried Mediterranean apricots. It might have ascended to taste glory if I had drizzled a melted 70-percent cocoa dark chocolate bar over it, but the dish lacked nothing. It was exactly what it was supposed to be.

The advantage to not trying to cook anything in particular is that you are blissfully free of expectations and emotional baggage.

It’s a great snack; it also topped my oatmeal and yogurt, and was nutritionally pretty good. I could sell it at the farmers market, except I’ll never make it again exactly like this. That’s the breaks when you bake on the right side of the brain.

Like painting with a full palate of colors, the key to recipe-less cooking is to have a pantry stocked with potential variables and to remember that not all who wander in the kitchen are lost.

Snarf’s Sandwiches’ flagship shop, 2128 Pearl St., will close March 27. It opened in in 2007 after the chain’s original location, a nearby former A&W Root Beer drive-in, was shuttered, also by development. Relocating near pricey Downtown Boulder will be tough, but Snarf’s has three other Boulder locations. … Despite months of renovations, the legendary Rocky Flats Lounge will not be reopening at its location south of Boulder. The owners hope to find a new location for the Wisconsin-inspired bar famous for its fish frys. … The 2019 Food Truck Cup April 6 during Longmont Restaurant Week offers beverages from Longtucky Spirits and St. Vrain Cidery and items to judge from Yolk’n Around, Jimbeaux’s Cajun Cuisine, Nacho Mama’s Tacos, Volcán Azul and Shinkyū No. longmontfoodrescue.org. … Fringe Pizza is open at 5400 Spine Road in Gunbarrel serving Neapolitan-style pies including one topped with Calabrian chilies, garlic oil, roasted rapini, mozzarella di bufala, Parmesan, bread crumbs and lemon-honey dressing. … March 31 is the last day to fill out your ballot for the 2019 Best of Boulder County Survey: boulderweekly.com … The Flatirons Food Film Festival’s inaugural Coffee Fest, April 13-14 in Lafayette and Erie, includes coffee roasting, latte art, tastings, demos and a screening of the film Caffeinated. flatironsfoodfilmfest.org. … Save this date: Aug. 24: Hygiene Hay Days Pie Contest.

Besides baking great bagels, Rosenberg’s Bagels produces a worth-the-drive Reuben. The one I enjoyed at their Stanley Marketplace shop in Aurora reminded me just how good that sandwich can be when it is made right. Start with juicy, warm, house-cured corned beef and add great sauerkraut and real Swiss cheese and Russian dressing. Serve it on a fresh, toasted pumpernickel bagel and add a real pickle and coleslaw. While I was there I had to grab some apricot and poppy seed hammantaschen, the neat filled pastry cookies.

“Lots of famous chefs today don’t look whacked, because they don’t work. They have a healthy glow and a clear complexion. There is blood in their cheeks. They haven’t got burns on their wrists and cuts on their hands.” — Marco Pierre White, author of The Devil in the Kitchen: Sex, Pain, Madness and the Making of a Great Chef