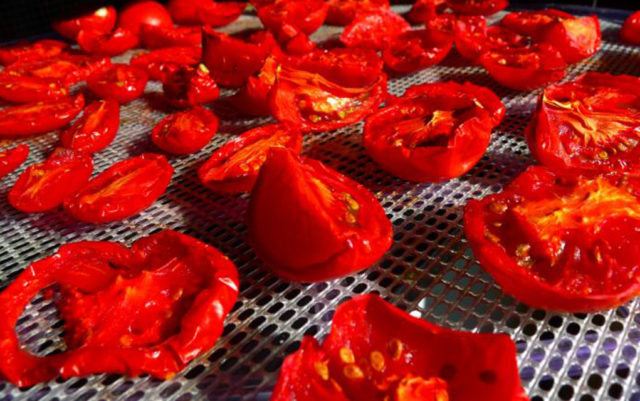 At the farmers’ market this spring, I found myself gushing to a grower friend about dry-farmed tomatoes. Dry-farming is a practice that’s been popular in California and parts of the East Coast for years, and is now spreading to the middle of the country — even to the dry, high plains of Montana. Not just tomatoes, but melons, squash, potatoes and many other crops can be dry-farmed — that is, grown without any supplemental irrigation. In the case of California, not a drop of rain or puff of fog touches the plants all summer, and still they produce. It sounds impossible, and the produce, accordingly, is impossibly delicious, I was telling my farmer friend. He nodded impatiently.

“Hang on a sec,” he said in an impish Jersey accent, and scuffled to a tray of tall, spindly tomato plants in 4-inch pots. “Plant this where it won’t get any water and tell me what happens.”

“What variety?” I asked in vain.

This farmer, who I will call Steve, is secretive, grouchy, and loath to discuss any of his practices, beyond assuring you that his produce is “clean.”

“Is it an Early Girl?” I pressed. Silence. It may as well have been called “crickets.”

Dry-farmed Early Girls look like the most normal tomato you can imagine. It’s a perfectly red round orb, the size of a tennis ball, an emoji symbol of a tomato. When you take your first bite, the skin is tough and leathery, and requires more force than usual to pierce. You’d better be leaning forward when your teeth finally break through, because what happens next is explosive. There seems to be more water inside than the total volume of the tomato could mathematically hold, and five times the intensity of flavor.

It was a cool spring day when I brought home Steve’s little plant. I had a lot of things to put away, so I stashed the little pot in a sunny spot by the shed, and proceeded to completely forget about it until, months later, I was weed-whacking a tangle of plants by the shed and this 4-inch pot flew out of the bramble. I grabbed the pot, intent to shake out the dirt and toss it, when I noticed a freshly whacked stump protruding from the dry, cracked dirt. Darn, I thought, Steve’s tomato plant. I was about to toss it when I noticed the severed stem revealed an angry shade of green inside. I reconsidered.

I learned what I know about dry-farmed tomatoes while researching a story on the subject for National Geographic (hey there, bucket list). I toured several dry-farm tomato fields in California, and they are a sight to behold. The young seedlings had been transplanted when the soil was still wet from the winter rains; when I showed up, six dry months later, the fields were full of yellow, dead looking plants that hung from their trellises like scarecrows, each plant weighted down by multiple bright red orbs.

I looked at my little green weedwhacked plant stub, and thought about those tough plants. It was late July, but I planted it. It sprouted leaves, almost before my eyes, and grew to about a foot tall before flowering. Today it sports a single, round, green tomato.

At the farmers’ market, I told Steve the story of his abandoned, battered plant. Instead of being impressed by its toughness he scolded me for being such a bad foster parent to a tomato plant. He still wouldn’t admit to it being an Early Girl, but he didn’t deny it either.

And then, on the side of his display, away from the myriad multicolored heirloom tomatoes that his customers adore, I noticed a box of pedestrian-looking round ones. He acknowledged they were of the plant he’d given me, but still wouldn’t say if it was an Early Girl. I bought the box and took it to the lab.

One thing about dry-farmed Early Girls, that tough skin holds moisture and keeps out infection and other agents of spoilage, so they last a long time. After my trip to the dry-farm tomato fields, I went camping on the coast, and those tomatoes lasted for a week before I took the remainder home. They retained their juiciness and flavor.

When it comes to preparing a dry-farmed tomato for eating, it almost doesn’t matter what you do. The hard and most important part is acquiring some, and the best way to do so is to ask around. It worked for me in the high valleys of Montana, and it could work in Boulder County too.

Due to their extra tomatoey flavor, if you do tomatoey things with them, the results will taste even more so. Slice them, sprinkle with salt, drizzle with EVOO, place on a piece of soft mozzarella, garnish with a leaf of basil. If you do all of the above, that’s bruschetta, with or without the garlic bread.

I made oven-roasted tomato sauce with vodka, tomato cucumber salad, and the most dazzling clamato you ever sipped. I dehydrated a few trays of slices and quarters, and marinated some of those in vinaigrette.

Here’s an easy little technique that will keep your diners very happy.

As tomatoes broil, they release water. All too often that water evaporates and condenses into a thick, delicious, tangy, orange reduction that quickly burns into a black splotch on the cookie sheet. The beauty of this recipe is that the sauce is absorbed by slices of bread as they toast.

Slices of a good crusty bread

Set the tomatoes on a baking tray, with a sliced side down. Sprinkle with salt and garlic powder, drizzle with olive oil, and a few pieces of crushed garlic. Broil, about six inches below the fire. As the wedges collapse and release their juices, place pieces of bread among them to soak it up. Put a little pad of butter atop each slice, if you wish. When the slices brown, turn them over. Scoop tomatoes from the pan and lay them on top of the slices, and broil until the bread slices are almost toasted. Pull the tomato skins for a smoother outcome if you wish, and lay the mozzarella slices atop the tomatoes. Close the oven door one last time and turn off the heat, allowing the cheese to slowly melt.

When melted, serve the cheesy, tomato-soaked slices, garnished with basil, salt and a drizzle of olive oil.