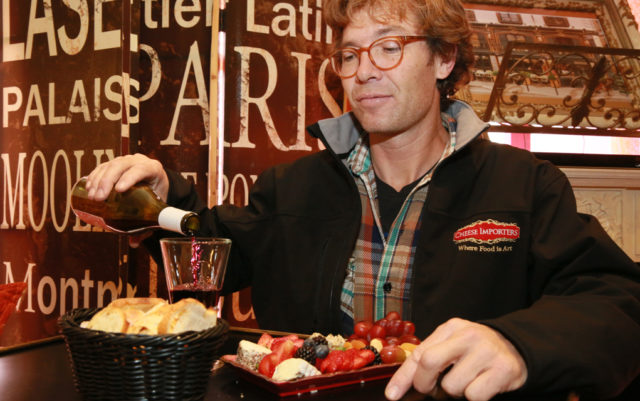 The numbers were getting to Samm White. Life helping run the family business, Cheese Importers in Longmont, day in, day out, for 20 years, had begun to grate.

“There was a time I was coming in here with horse blinders on, and I wasn’t inspired by any of my products, and it turned into just numbers,” White says. “That was a real wake-up call.”

So White, like so many others before him, sought solace on the open road, in the geometric comforts of a ’74 Volkswagen Westfalia he had refurbished — “Doesn’t everybody” dream of that, White asks, five weeks on the road with the family in tow, through amber waves of grain from sea to shining sea.”

“It was 55 [mph] top end, 35 going up the passes, and it really made me not want to rush anything in my life,” White says. “I don’t want to fit in as much as I can. I want to be able to enjoy for as long as I can what I’m taking part in right now.

“And then to come back from that and get right into business,” White says. “Two days after I was back, there was a point where … there was cursing and shaking, like, ‘What am I doing here?’ and that drew me right back in.”

It takes a lot to make Cheese Importers work. It’s one of the largest importers, wholesalers and retailers of cheese in the state, and it also operates a bistro modeled after a classic Parisian café or absinthe hall as well as a shop for Euro-tchotchkes and foodstuffs from the practical to the wild. (Where else can you get cheap squid ink pasta and the uniform of an 18th-century French ballerina?) Cheese Importers — and White along with his sister, Clara, and mother, Linda — serves a large spectrum of people, from chefs to café sippers to amateur cheese-mongers, and it serves, primarily, a highly perishable product whose sale can be as influenced by the time of year as a mention on a TV show or its placement on a shelf.

This business wasn’t White’s first choice. Nor was Cheese Importers his father, Lyman’s, first choice when he started the shop in 1976. Lyman and Linda White met on a boat to Europe — Linda was going to study at La Sorbonne, Lyman was draft dodging. “A torrid love affair ensued,” White says of his parents, and when the two came back to the U.S. and settled in Las Vegas, New Mexico, they saw a cultural care for food they’d once known in the States dying with TV dinners. A short stint running a natural bulk grains business petered out in ’71, after which Linda’s uncle, Ben Moskowitz, one of the first people to import cheese to the U.S. from Europe, helped set up what would become Cheese Importers.

Eventually, Lyman would offer his son a job.

“I did a lot of jobs from grease monkey to dishwasher to bus boy, and lift operator up at the resort,” Samm says. “I wanted to work with the business but I wasn’t really interested in having my family be purely business, which is what it felt like it always was. Christmas dinners, always talking about business. So I saw the stresses …  but at age 22 I got married and we got pregnant and talking with my dad, kind of like him and Uncle Ben, [he said], ‘So what are you going to do to make money? We’ve got a position open here, and we’d love to have you,’ and I accepted.”

White admits he treated the job as, well, a job, albeit one in the family business. It wasn’t until he “invested in [himself] as a person” that White began to take on more projects at Cheese Importers. Slowly, he carved out a niche working on the financial side, learning from his father, allowing his parents to tackle big picture ideas and creative pursuits. Lyman, White says, “could pull an idea out the air and make it happen,” and having more time to follow his creativity led Lyman to design and build sailboats, among other pursuits. Lyman and Linda eventually got divorced, but the business continued to do well.

Then, in 2010, a careless driver struck and killed Lyman while he and White were out riding their motorcycles. Personal tragedy aside, if it can be put aside, White had a much larger role to play in the business, and he felt an obligation to live up to the standards his father set for the store.

“Every day he’s on my shoulder. Every single day,” White says. “I get a little embarrassed or guilty or something about putting my name on it. We have increased sales since my father passed away. We have built a new building. He’d be blown away with where we’re at now.

“I need to make sure I own the positive things we’ve created to this point,” he says.

That requires context. White says he “spent a lot of time over these last 30 years … trying to give everybody what they need and that’s just [his] M.O.” The trip, in the VW bus, was intended to restart a conversation with himself, White says, so that he could better communicate with the world. The Westfalia as spiritual vessel was an obvious choice.

“My dad had [one] that was actually the first delivery vehicle for Cheese Importers. And I had ridden in them and spent time in them with a high school girlfriend’s family for a month and a half in the desert. It was a tempered dream I hadn’t really paid attention to,” White says.

The dream of hopping in a Westfalia, and the many iterations of the same escape, is as appealing to those who grew up in the ’60s and ’70s as it is to millennials. Just check out Instagram. White says he knows why.

“It speaks to something bigger in America,” White says. “People like me are just saying the dollar that meant security and meant that we were going to be OK, which we thought in our 20s, … I think everybody’s been going, ‘Holy cow, I’ve been working toward this pretend moment where everything is OK, and it’s not.’ It’s really about the conversation I had at a gas station or whatever that happens during these travels.”

Now the goal for White is to make Cheese Importers a place where people can slow down — go 35 mph on the inclines like his Westfalia. If it’s profitable, great, that means more time for White and his family to take vacation, where he can frame his state of mind to be better while he is in the shop.

When he came back from the Westfalia trip and found himself almost instantly battling the same stress as when he left, White took a breath, sat and thought about why the trip had been so cathartic in the first place.

“I think it was not really thinking about the cheese shop,” he says. “It was getting out there and fishing and swimming in waterfalls and camping and having parts break and dealing with some other stuff that was not just the same stuff that I’ve dealt with maybe under a different heading for the last 20 years. Life gets a little monotonous sometimes.”