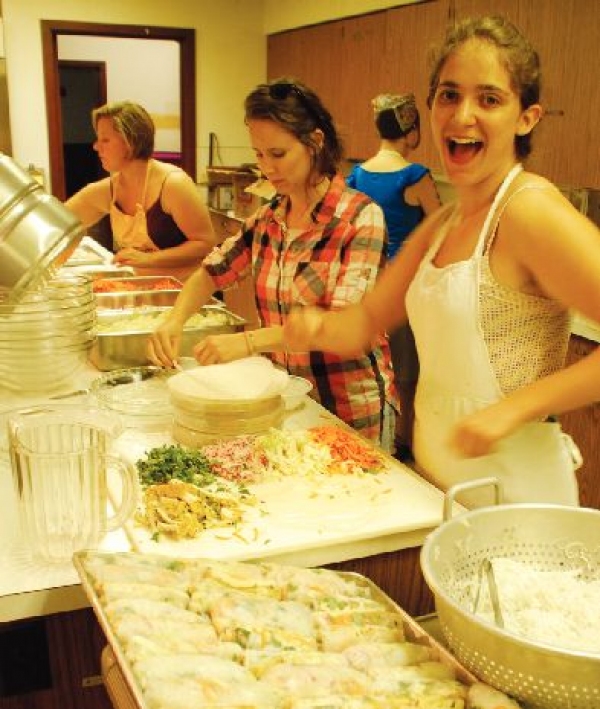 Imagine a helpful guide escorting you through a pitch-black void of darkness. Deeper and deeper into the darkness you shuffle with the help of your guide. Acoustic live music plays somewhere in this unseen, amorphous space before you. The music grows louder, as a scintillating smell of organic food wafts into your nose.

This is the experience that Rosh, a Bostonian Naropa graduate in his early 30s, wants to bestow upon patrons of Boulder — and eventually the world over — with his unique Blind Café experience.

“I’m still discovering what this event is,” says Rosh, who has organized the Blind Café in Boulder twice. “But the focus is building relationships, regardless of persons being sighted, visually impaired, or blind.

“The whole point of this event is community building,” he says. “We want to help people become more connected to themselves and to relate to new friends. The Blind Café creates a context for this interaction to happen.”

Along the way, Rosh says, Blind Café patrons can also enjoy food “that is designed to delight the senses.”

This upcoming Blind Café, referred to by Rosh as “Boulder Blind Café 3,” offers ticket-buyers a menu that is still in the works, with Chef McCauley flying in from a cooking study session in France.

“You can expect something French,” says Rosh proudly, who also notes that he does his best to allow McCauley to “express himself through his art,” while also trying to stick to a gluten-free, nut-free, vegan and vegetarian mélange to keep the meal “as inclusive as possible.”

“When we go to Austin soon,” Rosh jokes, “we’ll probably have to have some meat. But for now, we want to keep it something-for-everyone.”

Rosh also mentions that the concept of bringing in locally grown, farm-fresh foods — this time “probably root veggies and something like squash or other seasonal vegetables, and there will definitely be some kind of dark chocolate dessert, of course” — is a large

part of the Blind Café’s central conceit: fostering a new sense of community.

For those who may be concerned about not knowing exactly what they’re eating, Rosh himself will make changes in advance to food preparations as needed.

“One person wasn’t allergic to mushrooms,” he says, “but was hugely ‘mushroom-phobic.’ So, I went to his table and changed his one meal right before the event. We try to accommodate everyone.”

In doing all he can to keep his Blind Café experiences all-inclusive, Rosh also accommodates sighted patrons by granting them visually impaired or blind guides who act as escorts to the room’s dinner tables. These specialized waiters are, along with the chef, the only 30 or so staff members who are not volunteers.

After assisting patrons navigate through the dark café — fabricated in advance by Rosh’s “Master of Darkness,” Phil Norman — the blind waiters then engage with patrons in an open discussion forum.

Included in this round of Blind Café’s Q&A session will be Boulder’s own Gerry Leary of the Unseen Bean, who has become a master roaster of coffee beans despite being blind since birth. Aside from his involvement in the Q&A, Gerry has in past Blind Café experiences also engaged in walking around the room, while talking, to “show” patrons the general dimensions of what would otherwise be a shapeless abyss.

For Rosh, the Q&A session is one of the most significant components of the overall experience.

“A lot of people can’t handle the darkness,” he says, “and they have to leave. But one little 7-year-old girl was so brave, coming in and asking questions of our waiters.”

The young girl, Rosh continues, was at the time going blind herself and asked the waiters what it would be like when she lost her sight altogether.

“Even though no one could see each other,” says Rosh, “you could feel that each person in the room was touched by this.”

According
to Rosh, these singular interactions happen often at the Blind Café
events. His band, One Eye Glass Broken, with which he plays during the
events, performs a live music showcase of eight to 10 songs, including
popular covers.

But
they also play some rather “dark and intense” songs, says Rosh, who
revealed that there are some patrons who — because they can’t be seen in
the dark — “feel more allowed to cry in a public social environment.”

In
addition to producing and performing at the events, Rosh donates a
portion of his profits to Boulder Guide Dog Puppy Raisers Club. He says
he’s excited by the notion that these donations guarantee new harnesses —
normally costing $300 each — to blind persons and guide dogs who need
them.

Rosh’s
long-term goal is to continue putting on the Blind Cafes nationally, and
eventually go international, possibly bringing the experience to parts
of India, where his events can occur as a philanthropic gesture to both
enlighten and feed attendees for free.

He
hopes to continue the Blind Café experiences as long as possible, and
eventually with the assistance of grants or endowments, Rosh aspires to
reach his goal of creating a worldwide arena for building local
communities of people, regardless of sight abilities.

Boulder
Blind Café 3 will take place on Nov. 4 and Nov. 5 at 7:30 p.m. at the
First Congregational Church, 1128 Pine St. Tickets can be purchased
online at www.BoulderBlindCafe.com and are $45 for general admission, $35 for students and seniors.