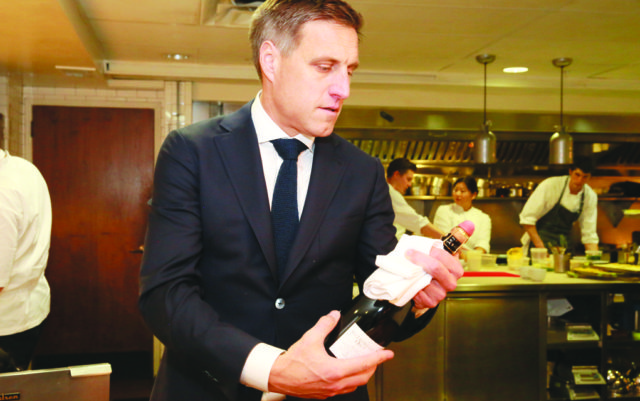 Ahead of him was a week in Northeast Italy. Bobby Stuckey and Frasca chef and co-owner Lachlan Mackinnon-Patterson would leave the Tuesday after Thanksgiving. They’d eat at a family’s home near a vineyard where they make barbera for their wine label, Scarpetta. On Thursday, they’d drive down to Emilia-Romagna to check out a new canning facility for the label’s cans of spumante. Then they’d eat a fish dinner in a “weird restaurant outside Venice in this not very romantic suburb.” The next day they’d travel to Trieste to do research on a book they’re writing. And then they’d eat in Fruili, the town on which Frasca’s menu is based. Then they’d fly home.

Behind Stuckey, by only a couple days, was the New York City Marathon. It was, like, the “fifth time… maybe” that he’s run it. He’s been a Runner’s World subscriber since he was 10. I asked, in the empty Frasca dining room one Friday morning, if he’s ever going to run right out of steam.

Stuckey, it turns out, has no choice but to run. He’s on the floor of his James Beard Award-winning restaurant almost every night, and he oversees a new restaurant in Denver, Tavernetta, that burned down one week after it opened, an artisan pizza chain, the wine label, the book and more. All that for “a hyperactive, ADD, dyslexic kid” from Scottsdale, Arizona, whose mom put him in kindergarten a year early “to get him out of the house.”

Because of that, he was a year younger than his classmates and too young to play Little League, so his father, seeing his son in need of a place to release energy, signed them up for a 10K.

“So that just became a thing that I did,” Stuckey says of running. “I wasn’t very good at it, but I worked at it really hard.”

Running became medicine for Stuckey, and is ever more critical for him now. He’s constantly plugged into the various aspects of his food enterprise, from managing employees to bottling wine overseas. He doesn’t listen to music, he doesn’t watch TV. To clear his head, Stuckey runs.

“You have to go to a point that is not comfortable for a long time, and there are a lot of benefits to that physiologically, mentally, spiritually,” Stuckey says. On his runs, he’s come up with long-lasting ideas that have given Frasca its uniqueness: Monday night wine dinners, their hallowed four-course menu, the ballyhooed $1,000-a-head truffle dinner. During our conversation, Stuckey remembered an idea for the book and yelled out to his assistant to remind him later about it.

Stuckey is everywhere. He partakes in speaking engagements, he travels often, he accepts awards, he has articles written about him seemingly monthly. At the pace at which he runs his career, you can generally find out all you need to know about Stuckey’s life whenever you want.

And yet, he rejects the food personality as a celebrity. Anthony Bourdain’s Kitchen Confidential made it seem not only cool to be a chef, but that a necessary part of the chef’s life was to burn out on drugs and alcohol, which is a perception that still damages the industry, Stuckey says. Working in the industry is tough work, but it’s in that tough work that rewards are found. He isn’t priggish about that point — it’s the natural development of someone who knocked on the doors of fine dining establishments when he was a kid to get jobs and who thrived in the demanding atmosphere at The French Laundry, where he served as wine director. Stuckey just thinks the industry has changed to a point where the focus is on the individual above the sum of a restaurant’s parts.

So how does Stuckey stay relevant in that world?

“You’ve got a lot of young chefs, they’re on Instagram and seeing what someone’s doing in Sweden or Copenhagen, and they want to do that, and that’s not our mission statement. Our mission statement is using nice ingredients and letting them speak for themselves. … It’s not culinary trickery here.”

It may not be trickery, but it’s magic at times. Like a poem says more than its parts, dishes at Frasca — radicchio, beef carpaccio and olive oil; broad pasta, veal, broccolini and shaved cheese; pork, turnips and lentils — are made with such care and paired so expertly with wine, that they defy explanation yet speak to something intimately sensational.

So it’s no wonder Stuckey eschews trendy food media; it belies what he holds dear about cuisine.

“Sometimes I see journalism is constantly trying to find the next shiny penny, so they maybe write about something that’s not as important as they’re making it out to be,” Stuckey says. Doesn’t that sound familiar?

Stuckey requires the staff at Frasca to read the New York Times food section every Wednesday, and encourages the team to read print media from around the world. Because he’s constantly working at Frasca while he’s in Boulder, Stuckey says he probably has a better sense of what’s going on on the international food scene than locally.

That’s no knock on Boulder — Stuckey says he and Mackinnon-Patterson chose Boulder over San Francisco, Portland and Seattle for Frasca because of the work-life balance it offered. Stuckey gets to run every day, often tackling 11-milers up Poor Man’s Road, and rides his bicycle to work. “I couldn’t do that,” in San Francisco or another bigger city, he says.

And while he continues excelling at Frasca and growing Scarpetta and Pizzeria Locale, former employees are starting to pop up with their own restaurants from New York to San Francisco. One such restaurant, Pasquale Jones in New York, has been well-received. Stuckey says, sure, Frasca might have an international reputation were it in that exact location, but he’s happy enough to visit it, as he did during the marathon, providing the chance to take a breather for just a second.

“I smelled a lot of roses last week in the New York marathon,” Stuckey says. “I soaked it all in. It was great.”