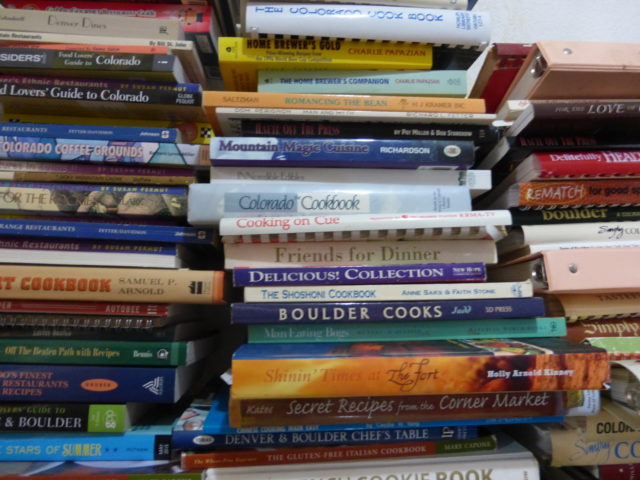 The first Colorado cookbook I acquired was probably the Colorado Cache cookbook published by the Junior League. That was about 30 years ago. The most recent addition to my library of Colorado and Boulder cookbooks and food-related books is The President’s Kitchen Cabinet: The Story of the African Americans Who Have Fed Our First Families, from the Washingtons to the Obamas by Denver author Adrian Miller.

As a longtime newspaper food editor I ended up with hundreds of cookbooks, which I have vastly reduced recently, but I have never let go of any food or beverage cookbook, nonfiction, murder mystery, beer book or guidebook that had anything to do with Colorado, and the collection has reached 200 or more books.

My oldest Colorado cookbooks include a hardbound volume from Kings Daughters of Grace Church in Denver, circa 1891-92, including recipes for shirred eggs, suet pudding and molasses candy and helpful household hints such as “To Stop the Flow of Blood” and “How to Take Out Mildew.”

Published in the early 1900s by Federal Gas Company, The Boulder Cookbook by Mrs. F. W. Leland (“A Boulder Woman”) includes formulas for everything from curried rice to strawberry tarts. The Nathaniel Lyon Cook Book published in Boulder in the late 1800s includes snippets of advice such as: “It has been ordained that man shall earn the bread, and woman bake it.” Copious ads include many for Lily White Flour from Boulder Milling and homemade candies from Wachter’s Confectionary Store, 1910 12th St. Some of the recipes have an alarming lack of detail because they assumed that readers/cooks knew how to cook:

“Lemon Pie: Yolks of two eggs, one cup of sugar, the juice and grated rind of one lemon, one tablespoonful of cornstarch; then add a cup of boiling water, use the whites of the eggs for frosting; bake in a slow oven.”

I have restaurant cookbooks from The Fort, Vesta, Rioja and 100 spiral-bound fundraising cookbooks from the Chautauqua Association, Boulder County Democratic Women, Jarrow School, St. Louis Parish and many others. Finally, there is my own contribution to this one-of-a-kind collection: Denver Dines, a restaurant guidebook I wrote a few years back.

I’m downsizing my residence this week and moving from Lafayette to Louisville. This has also meant downsizing my stuff, but I’m still left with some significant piles of books. I need to find a permanent home for my Colorado cookbook collection so I’m appealing to my readers to crowdsource an answer. I know I can donate the collection to a historical society or library but these historically important books and sources would end up being stored in a warehouse.

In a perfect world, this one-of-a-kind collection would be kept intact and made available to chefs, cooks and historical researchers in Colorado. If you have any suggestions, let me know at nibbles@boulderweekly.com. Now, let me tell you about my extensive collection of SPAM memorabilia…

Bad Food Idea of the Week

As a parent, one of your primary duties is teaching your offspring what not to put in their noses. Clearly the lesson wasn’t taught well or just didn’t stick. Instead of putting cacao in chocolate mousse where it belongs, I’m reading disturbing reports of folks putting it up their noses. Granted, people have been putting inappropriate things in their nostrils for several millennia, but cacao? Apparently the snortable Coco Loko product includes cacao powder, gingko biloba, taurine and guarana,which is essentially brown, powdered energy drink. Gross. Blame apparently lies with a Belgian chocolatier who made a “chocolate shooter” to blast chocolate up your nose in order to appreciate the nuances.

Tastes of the Week

Recently I’ve been lucky enough to sample some diverse ethnic foods at local eateries. I was really impressed by the depth of flavor in the chicken mole enchiladas at Los Carboncitos in Denver. The Mexican restaurant makes the sauce from scratch including a strong hint of chocolate. I also enjoyed the near perfect pressed El Cubano sandwich and lechon (shredded pork) with black beans and rice plus fried ripe plantains at Frijoles Colorado Cuban Café in Lakewood. Then there’s the Cuban coffee and pastries. Finally, my nomination for a vegetarian comfort food classic is the vegetable korma at Tiffins Indian Café in Boulder with cauliflower, broccoli and other tender veggies in creamy but slightly spicy sauce.

“She’s like the kind of food you had when you were a very small child that you get the taste of on your tongue occasionally but that you can never identify or locate.” — from The Trick of It (Picador) by Michael Frayn