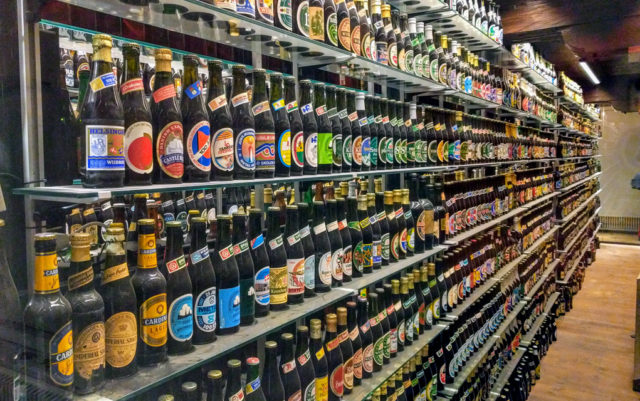 If you were in a Colorado grocery store over the last few weeks, you likely saw one of two odd things: rows of empty refrigerators, or, if you went on or after Jan. 1, full-strength beer.

On New Year’s Day, a law passed last year by the state legislature and signed by Gov. John Hickenlooper went into effect, allowing grocery stores to sell full-strength beer instead of the 3.2-percent alcohol by weight (approximately 4-percent alcohol by volume, the more common measurement of alcohol) beer they had only been allowed to sell previously. Grocery chains will also be able to purchase attached liquor and wine stores. Meanwhile, existing liquor stores will be able to operate more than one location.

What will happen next is unclear. Breweries, liquor stores, grocery stores and consumers on both sides of the issue have spent the last year releasing economic studies and press releases trumpeting or denouncing the change. On one side, grocery store chains and large brewing conglomerates welcome the change because, one, it’ll lead to more sales, but, two, they say it’ll be cheaper and easier for consumers to get beer. On the other side, some craft breweries and small liquor stores say the changes will put them out of business.

Only time will tell who’s right.

The biggest change we’ll likely see in Colorado is a decrease in beer prices. Some say that decrease is temporary and will squeeze small liquor stores out of the market, others say it’ll result in a total increase in beer sales, increasing jobs as well.

A widely cited economic forecast from the Daniels Business School at the University of Denver claims that the average Colorado household (that consumes alcohol) will save more than $750 in three years, as beer and wine prices will decline 18 percent. The study estimates there will be $485 million in annual cost savings to Colorado consumers, which will have a windfall effect and generate 5,000 jobs — perhaps take that with a grain of salt.

On the other side of the argument, though, liquor stores say those economic benefits won’t pass on to them. A study by Summit Economics commissioned by several small liquor store trade groups claims that the price decline will last only until small liquor stores go out of business, unable to compete with grocery store prices. Those liquor stores will have to increase the price of wine and spirits to compete, and the consumption of wine and liquor will decrease by 9 percent as a result, the study says. Too, Summit found that consumption of domestic beer by the big three international producers will increase 5 percent.

But will the change drive craft breweries out of business, or will it actually help them? That depends on who you trust to sell that beer and how strong you think the craft beer consumption market is.

The DU study states that even though Colorado ranks third in the number of craft breweries per capita, it has hampered the growth of the industry by limiting their sales to only liquor stores. The study cites data from Kroger’s and Safeway that indicates over $100 million of craft beer is sold in their Oregon and Washington stores, where full-strength beer is allowed to be sold. The study claims an additional $125 million of craft beer will be sold and will lead to 900 jobs.

Contrast that with the forecast from the liquor store trade groups, which say 8,600 jobs will be permanently lost within three years, as up to 50 percent of small liquor store beer sales will be lost within the first year alone. They extend the impact to the state, saying lost jobs means lost wages, which means lost tax revenue, to the tune of $11.9 million in state and local taxes within three years.

The DU study tamps down fears that the changes will usher in a wave of liquor store closures, citing the coexistence of liquor stores and grocery stores in Oregon and Washington. Indeed, Boulder County’s independent liquor stores will still be the place to get the best variety of craft beer. What remains to be seen is if they’ll be able to survive the loss of revenue from sales of Budweiser, Coors and other big brands that effectively subsidized the sale of craft beer.

The Brewers Association, which represents the thousand-plus craft breweries in the country, has taken steps to keep consumers aware of craft beer. Its independent craft brewer seal is labeled on its member’s retail items, so even as big brands and small brands compete in the grocery store, consumers will be able to find and support local craft breweries if they choose to.