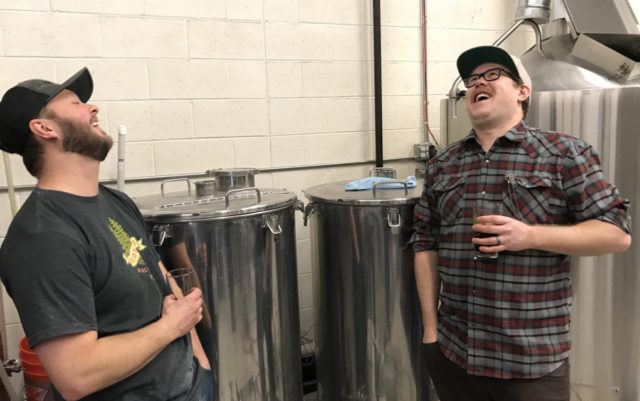 Jake Evans of Wild Woods Brewery and Sam Scruby of Upslope Brewing Company are ready to do something stupid. Or, as Scruby quickly corrects, “Something revolutionary.”

“The beer world is not ready for this,” Scruby proclaims with a wide grin, one that quickly gives way to a hearty, deep laugh. “Tan and Black, never forget!”

Tan and Black — an inversion of the iconic Irish beer cocktail, Black and Tan — will be one of the beers poured at this year’s Collaboration Beer Festival in March. Put on by Two Parts, a food event company, and the Colorado Brewers Guild and held at Denver’s Hyatt Regency, Collab Fest (as the attendees call it) brings together over 200 brewers to cook up specialty one-off beers for a festival specifically designed to highlight the collaborative community of the craft beer world. Of the 100-plus beers poured at the festival, most are irreverent approaches to brewing; many of them are interesting, some are even phenomenal.

For Evans and Scruby, Collab Fest gives them a chance to put their money where their mouths are. Though both have frequented each other’s facilities for a pint or three, this is the first time they’ve gotten to brew together. And with this year’s Collab Fest falling on March 16, the decision to brew the Tan and Black is more than appropriate.

“We got to turn heads somehow,” Scruby says, noting the overwhelming display of creativity at Collab Fest, and across the craft beer market in general.

Meaning, Evans and Scruby need to brew two beers to make the drink — an Irish-style dry stout and an English-style pale ale — while many others will brew just one.

First up, the stout — a sort of Guinness clone they’ve tweaked to give the beer a greater density, aged on wood chips soaked in Jameson whiskey. In between checking temperatures and keeping an eye on the two-barrel mash tun, Evans heads to the back and returns grinning widely. In his hand, a small silver bar spoon, the kind used to float the top beer in the cocktail.

“Your brew day souvenir,” Evans says as he bestows the spoon to Scruby. Both laugh at the tininess of the spoon in contrast to the number of people expected at the festival.

“It might be ambitious to make [Tan and Blacks] for every single person,” Scruby says with a shrug. “We’ll cross that bridge when we get there.”

As they work, Scruby shows off Upslope’s barrel-aging program as well as their latest brown ale made with coffee beans from Rwanda.

“It’s exciting to see how other people do things and what I can learn,” Evans says.

The spirit of Collab Fest — both the playful and the educational — is alive and well. For tickets and a chance to sample Evans and Scruby’s Tan and Black, visit collaborationfest.com.