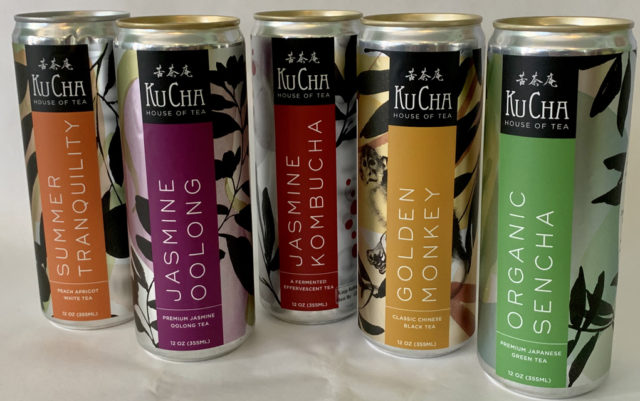 The pandemic has forced many in the local food industry to adapt… quickly. Qin Liu and Rong Pan, the husband-and-wife founders of Ku Cha House of Tea, have leaned into that change, launching a new line of canned iced teas brewed from some of the Japanese and Chinese whole-leaf teas they carry in their stores.

It’s a slight pivot that may prove crucial as we enter a third spike of the virus.

“Any day Governor Polis can ask [us] to close down,” Pan says. “So for the business to be more resilient, we need more channels.”

The pandemic was the “kick” Pan and Liu needed to launch their new line. It was something the CU Leeds School of Business grads always wanted for their growing company, which now has locations in Fort Collins and Cherry Creek in addition to its flagship Boulder location, but hadn’t gotten to yet. Sometimes necessity creates the best opportunity, and so this July, Pan and Liu started brewing and canning batches in a commercial kitchen.

Pan says the packaging process was too time-intensive, so they partnered with Full Metal Canning in Longmont to produce an initial line of five teas: organic Sencha green, Golden Monkey black and Summer Tranquility white, as well as jasmine oolong and a kombucha made from it.

Each can has nothing in it but water and tea — no additives, save for the kombucha, which requires sugar for fermentation. By tasting each, you wouldn’t know it, though.

“There is absolutely nothing added to it other than tea because we want the tea to be the star,” Pan says. “If the tea is good enough, you don’t need anything else to cover it up.”

Ku Cha’s initial line is proof of Pan’s diagnosis that, “to put it mildly” most iced teas are disappointing — loaded with sugar to cover up inferior tea. If you’ve ever stopped in to Ku Cha for a tea ceremony (pre-pandemic, of course), for a to-go cup or for a bag of loose-leaf, then you know they’re using choice tea leaves sourced from around the globe. And if you’ve had the pleasure of chatting with Pan or Liu, you know they have a sommelier-level knowledge of tea, as the beverage has been elemental in their lives since they were young, growing up in China.

That expertise all comes through in the canned teas. The Sencha green tea is herbal, with a pop of lemongrass and a buttery undertone. The Golden Monkey, a prized style of Chinese black tea, is malty and chocolaty. The white bursts with peach and apricot, the jasmine oolong is packed with that recognizable flavor and the kombucha made from it is well-executed.

The plan, Pan says, is to test the market with these flavors (you can currently get cans at any Ku Cha location, with more third-party retailers coming on board soon) and to expand the line with some unique flavors of tea, like plum or cherry.

So, yes, the canned teas are a way to “have some product readily available to reach our customers” in the event of another stay-at-home order, Pan says. But given how well-executed Ku Cha’s canned teas are, it’s easy to imagine these offerings, and more, on grocery shelves across the county long after the pandemic is gone.