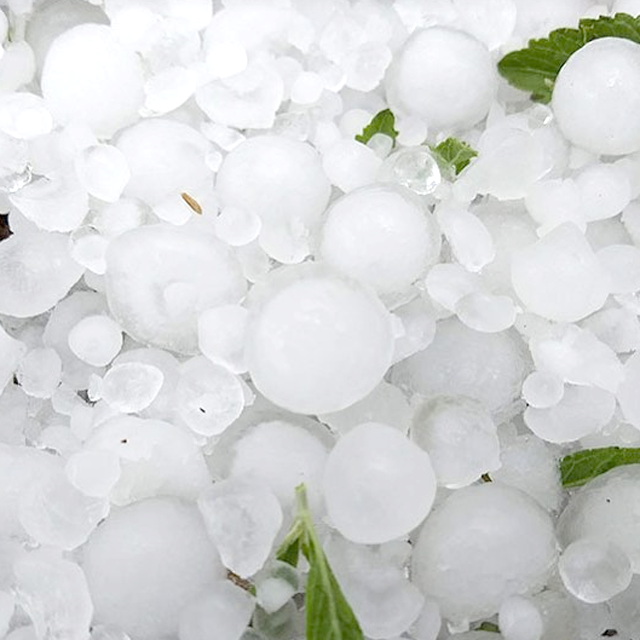 Next month, we’ll celebrate the Lafayette Peach Festival here in Boulder County. For those of you willing to take the drive, you can also get a hands-on peachy experience if you head out to Palisade for its festival.

It likely won’t be the main topic of conversation, but you may hear the term “cytospora” pop up once or twice at either of these festivals. Cytospora is a fungus that’s been growing in Palisade peach orchards, and researchers at Colorado State University are rapidly trying to find the best way to mitigate it before it ruins orchard swaths and cuts into farm profits.

Cytospora is just the latest bit of havoc Mother Nature has wreaked this year on the farmers, ranchers and growers that supply some of our most cherished Colorado produce. Hail damage, drought, wildfire and disease have all taken their toll on food producers in 2018, resulting in millions of dollars of lost revenue, ruined fields and more. Here’s a rundown of what’s happening statewide.

Remember those three weeks in June when it seemed like Boulder County got a hailstorm every afternoon? Well, the hailstones may have stopped falling, but the impact of their damage is still being felt by area farms.

At Aspen Moon Farm’s Niwot fields, operated in concert with the Boulder Valley Waldorf School, eight acres of vegetable crops and seven acres of heritage grain were lost for good after a 30-minute hail storm on June 19. That amount of damage amounted to over 50 percent of the farm’s production. The fields were flattened and rendered unusable for the season.

The damage to the farm represents more than a loss of one year’s harvest. The educational farm required co-owner Jason Griffith to secure several grants to install essential farm infrastructure, including a water irrigation system. Aspen Moon workers spent hours plowing and preparing the fields before the hail storms. Now in order to recover, Aspen Moon and the Waldorf School are accepting donations to help repair and mitigate losses. Check it out at bvwaldorf.org/giving/farm-support.

Much of Colorado is in a state of drought, with several areas experiencing extreme drought conditions. The San Luis Valley is likely getting hit the hardest, and seven Southern Colorado counties have been declared disaster sites by the U.S. Department of Agriculture.

The declaration means farmers in those distressed areas are eligible for disaster relief funds to help cover their losses.

Estimates for the total crop loss so far in 2018 hover around 20 percent. In addition to the state’s dryness, Colorado has set temperature records for consecutive days above 90 degrees, further stressing natural resources and crop yields.

That heat coupled with the drought dryness has also contributed to the proliferation of wildfires this year. In addition to creating massive damages to property, wildfires have had a severe impact on Colorado food producers this year.

First, there’s the allocation of water. Conservation messaging has been sent to farmers across the state since fighting the wildfires has required more and more water. And as the drought exacerbated the wildfires, water became even more limited over the last few weeks.

Then there’s the actual property damage to food producers. The USDA announced at the end of June it would issue funding to Colorado farmers who were interested in replacing “critical irrigation systems, replacing windbreaks and shelterbelts, rebuilding fences, protecting and restoring scorched grazing lands and implementing various conservation measures to mitigate losses.”

“Agricultural operations in the areas of the wildfire have been devastated,” said State Conservationist Clint Evans. “(This) funding … can help these farmers and ranchers start the process of recovery.”

Which brings us to peaches. Cytospora is a fungus that is growing on peach trees in Palisade orchards. It kills trees by destroying their ability to intake water. Estimates for lost produce from the fungus skyrocket into the millions of dollars every year.

Colorado State University researchers are working on a concoction that will help peach growers fight back against the fungus, but Bruce Talbott, of Talbott Farms, says that maybe the loss of peach life has been overblown so far — they have a bumper crop that helps mitigate losses.

Talbott says the real impact of cytospora is that it reduces the lifespans of infected trees, which means growers have to replace orchards more rapidly than they would otherwise.

“We end up with 10 or 15 productive years out of an orchard instead of the 20 to 25 that we would normally expect,” Talbott says. “The fruit that is produced is unaffected by the fungus and is of the same high quality that we have had over the last 100 years.”

But there is less total fruit produced than there would be if cytospora wasn’t present, and the replacement of orchards requires growers to direct more funds and resources.

The Palisade Chamber of Commerce, understandably, wants folks to know that in no way does cytospora impact the amount of peaches they can take away from a visit to the region.

Also, for those of us who are Colorado wine lovers, cytospora does not appear to be damaging grape vines, but a long, dry winter did create some issues in the region. But, there is one bit of silver lining: Researchers recently found trace amounts of radioactivity in California wine grapes, which were impacted by the Fukushima nuclear plant disaster. So, we may have our issues in Colorado, but at least our wine’s not going to give anyone a tail.