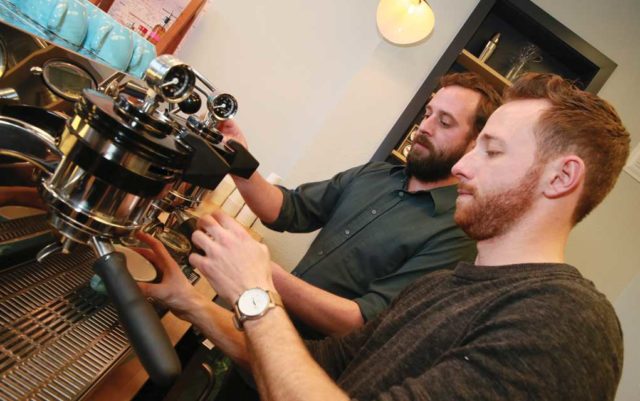 I’m staring at a giant pink map of the world plastered onto the wall at Gunbarrel’s Ampersand Coffee Roasters. I’ve always been drawn to maps. When I was a kid, my mother painted a world map that spanned the four walls of my bedroom. I’d stare at it, like I was doing at Ampersand, and think about what grass looked like in Tanzania or when the streetlights turned on in Jakarta.

In my hand is a cup of Ampersand’s Peruvian espresso. It marks the end of a long journey. The espresso started as two species of coffee beans that were grown in Cajamarca, Peru, by women farmers, which were then washed and dried. A sample was shipped to Jason Westenbroek, the head roaster at Ampersand, and during a group “cupping,” Westenbroek, the entire company and members of the community tried it alongside brews made from other beans. Everyone silently finished their cup and judged its quality, and in the end, Ampersand decided to bring it in.

After a few months, the beans arrived in Gunbarrel. Westenbroek then began to tinker with the roast, using the “Cadillac of coffee roasters,” an MRI-like machine that puts no direct heat on the beans, giving the roaster more flexibility and the final product more consistency. Westenbroek settled on a medium roast, using a refroctometer, which determines how light refracts off materials in liquid, to pinpoint the strength of the coffee.

Then, the beans were packaged, with some reserved for walk-in customers. There, it’s sampled multiple times per day to ensure quality, and brewed with regard to the hour-by-hour fluctuations in air temperature, humidity and pressure. When I visit, Steve Cassingham, Ampersand’s director of marketing, tells me I should try it because I said I liked nutty, earthier roasts; educating people on the several hundred flavor profiles of coffee is part of the Ampersand process, too.

No doubt, the coffee is great. The first thing I notice is the aroma — dark chocolate and toasted almond. The texture is thick and it moves slow on the tongue. Once the first sip is down, flavors such as buttery cashew, fresh cacao and fruity pepper like in sauvignon blanc emerge. And, remarkably, the texture and profile stays until the final sip.

Maybe it’s the map, or Cassingham’s spiel, or both, but a cup of coffee has never felt this big.

That’s the point at Ampersand. They’re committed to telling the story of people throughout the coffee-making process, and they don’t want to be responsible for messing up the last step, Westenbroek says.

“Farmers work so hard to grow beautiful coffee, it’s my job to represent those farmers and make that coffee the best that it can be,” he says.

But for as good as the coffee is, Westenbroek, Cassingham and CEO Kurt Hans see it is a means to an end.

“We want to completely change the way coffee is done,” Cassingham says. “In Haiti, we’ve targeted a community where we want to be able to grow a completely sustainable farm that’s safe for women and children to be at. We want to educate the children, and we want to have a completely fair-trade organic model that is self-sustaining.”

The three sat down with everyone else in the company recently to come up with a “big, hairy, audacious goal,” and what they set their sights on was a plan to empower people in developing countries, particularly women, by giving them skills, housing, health care, education and opportunities to run their own businesses. 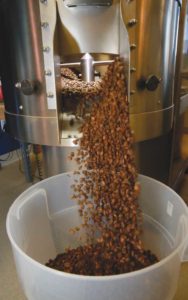 “The goal is to take the women who are working on these farms who have very little to no coffee experience and, hopefully within five years, they’re able to move on and buy property, they understand coffee growing and processing, and they start their own plantation and kind of start to build Haiti back into a coffee-producing country, which it really isn’t nowadays.”

Haiti serves as a good starting location for the company’s goals because of its coffee-producing history (it was the largest producer of coffee during the era of slavery), and its relative political stability and safety; relative, that is, to areas like Papua New Guinea and the Congo, where Westenbroek says Ampersand thinks they can make a big impact one day. They’re also working with female coffee growers in Yemen.

“People always talk about feeding the hungry as a Band-aid; you give them food, they need more food,” Hans says. “[But if] you give them a way to sustain themselves and make money, then it turns into an upward spiral. The families become more stable, the economy becomes more stable.”

Hans says by supporting farmers in developing coffee-growing regions, not only is there a social benefit, but with proper resources and education, the coffee gets better. It’s mutually beneficial, he says.

“We would love to pull a Jamaican-blue-mountain quality out of Haiti, and we think that’s possible, and we’re going to see if we can make that work,” Hans says.

Until Ampersand is able to set up the community in Haiti and other places, they’re working with groups Cafe Femenino and the International Women’s Coffee Alliance to source beans from women farmers around the world. Westenbroek says they’re focused on helping women because although 70 percent of the world’s coffee is grown by women, only “a very, very small percentage of coffee planations are owned or managed by women.” That has lasting impacts on communities in developing nations.

“Through market studies we found that men in Third-World coffee growing regions tend to put 10-15 percent of their income back into their families; with women it’s 70-90 percent,” Westenbroek says. “When you go to a place like El Salvador [with many male-managed farms], what tends to happen is kids drop out of schools, they join gangs at a young age and they continue these cycles of violence. Whereas women keep their kids in school and they grow up to benefit their communities.”

Hans says the effort to provide women opportunities in these communities comes foremost for Ampersand.

“Yes, we’re very passionate about environmental and local economies and coffee quality, but we feel like the best way to get to those paths is women’s empowerment,” he says.

It’s been a long road for Hans to get here. He quit a comfortable job in private equity he had for nearly two decades to follow his passion for coffee and support those in the developing world. There were some initial obstacles, and it wasn’t until he got Westenbroek, a coffee roasting instructor who had been operating coffee shops since he was 16, and Cassingham on board that the vision for Ampersand took shape.

While they focus on working with the back-end suppliers of coffee and improving their living and working conditions, the three understand that the best way to support them is to build a community for their coffee here in Boulder County. Which is why they take such care to produce beautiful roasts, and welcome the community into their tasting process. Ampersand also offers flights of coffee so guests can see the difference between three different varieties or three different brewing methods.

Education is important to Ampersand. They want us to know what we’re drinking. They put a big map on the wall so you have to think that the beans in the coffee you’re drinking came from somewhere. But instead of leaving us to wonder about how the world lives, Hans, Westenbroek and Cassingham are on a mission to show us.