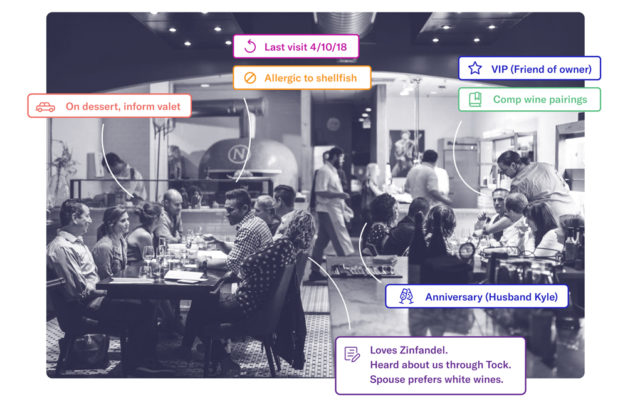 If you’ve ever made a reservation at a Boulder County restaurant, chances are you did so through OpenTable. A long list of restaurants in the area use the ubiquitous booking service, which charges restaurants $1 for every person who books through it. But, there’s no guarantee that a diner will actually show up to the restaurant, potentially causing the business to lose hundreds, if not thousands, due to the empty seats.

Still, it’s a problem that needs a solution as OpenTable and other booking technologies aren’t moving to solve it. The question is: How does a restaurant hold diners accountable for the reservations they make, while not being a jerk about it.

“There were no tools to do that other than what felt penal,” Kokonas says. “That didn’t feel like hospitality.”

So, in 2014, Kokonas called his friend and Google executive Brian Fitzpatrick and told him about his idea to develop a new restaurant booking system — one that, if a restaurant chooses, requires diners to pre-pay a portion of their bill before they can make the reservation. It took a little convincing, but Fitzpatrick came around, and eventually the duo developed and launched Tock.

Kokonas introduced it in his restaurants, and won early support from some of the country’s best restaurants like The French Laundry and Per Se. Boulder’s Frasca and Pizzeria Locale were early adopters, as well. Immediately, the no-show rate at Kokonas’ restaurants dropped to less than 1 percent and, on the first day alone, one of Kokonas’ restaurants raked in an incredible $562,000 in pre-payments.

There was a blowback, largely from the culinary press, who assumed there must’ve been outrage among diners everywhere that restaurateurs had the audacity to ask for money days, weeks and months before a diner stepped into establishments.

“It was pretty controversial,” Kokonas says. “But restaurants are forms of entertainment. … I thought theaters, concerts, baseball games all sell tickets. Maybe restaurants should do it too.”

Tock withstood the initial grumbling. It was a shock to the system, literally, but Kokonas found that diners would be willing to pre-pay for reservations at restaurants where they knew they’d have an exceptional experience. Today, about 1,000 restaurants, wineries and other establishments use Tock, and the company is adding about four restaurants per day to its list of users.

Kokonas implemented common-sense changes to the reservation status quo with Tock, too. For instance, instead of restaurants calling to remind diners of their reservations and to confirm they’ll still be coming, Tock sends automatic text messages to which diners can respond with a simple yes or no to confirm or cancel a reservation. That may sound like a small change, but it’s one that better serves modern diners and restaurateurs, Kokonas says.

“People don’t want to be called,” Kokonas says. “That’s why we do text messaging. If my phone rings in my pocket and I don’t know the number, I’m not answering it.”

About 60 percent of the restaurants that use Tock don’t require pre-payment. But Kokonas says diners are willing to sign up and reserve through the platform because they see the restaurants using it and “know the quality is there.”

Indeed, Kokonas chose to make Tock a platform for restaurants to use, and not, primarily, an app for diners to browse, because he recognizes the value of connecting diners directly to their favorite restaurants.

“The way to get people to use Tock is not an app, it’s to have these great restaurants,” Kokonas says. “No one’s dining at Frasca because of Tock.”

Frasca, and its sister restaurants, Tavernetta and Pizzeria Locale, switched to Tock last year after co-owner Bobby Stuckey got fed up with not only losing revenue from empty seats, but wasting hard work and tons of food from no-shows. Kokonas says Tock has provided another tool for Stuckey and other restaurateurs to improve their overall hospitality: sharing information based on previous reservations that would help restaurants improve their service.

“For someone like Bobby, if someone comes into Locale 100 times, and then goes to Frasca, he should know who that is,” Kokonas says.

So, for instance, say a person notes they have a dairy allergy on a reservation, that information will transfer over to reservations at other restaurants.

The truth is, most diners don’t give a hoot about what platform they book reservations through. Most people start their dining searches at Google, and go to restaurants’ websites and book through whatever system they have — Tock or OpenTable or whatever else. So there’s “no risk at all” for restaurants looking to change their booking system, maybe save on booking fees and guarantee more seats are filled and less food is wasted in their restaurants.

Tock still has a ways to go before replacing the current reservation system, but it’s making inroads in food scenes across the country, from big markets like Chicago, New York and San Francisco to smaller cities like Kansas City and Boulder/Denver. Boulder’s Basta uses Tock, as does Denver’s The Wolf’s Tailor, and Kokonas says several Boulder restaurants, including Arcana, will be switching to the platform in the new year. And, he’s found that once “seven or eight” restaurants make the switch, a snowball effect occurs wherein other restaurants decide it’s time to make the switch.

Kokonas says something at the end of our chat that makes my heart sink — “on Valentine’s Day, 35 percent of reservations are no-shows. I can imagine guys terrified booking three or four places.”

I’m ashamed to admit I’ve done that. But I also know it’s not a good thing to do to a restaurant. But I also don’t feel like pre-paying for a reservation is punitive. It’s a cultural shift that needs to happen, and right now, Tock is driving that change.