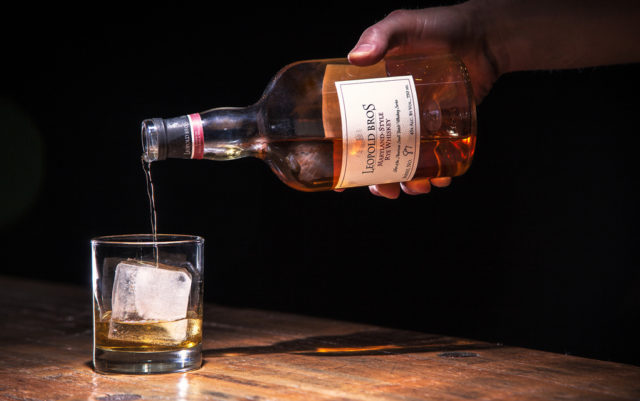 Today, you might peruse the aisles at your neighborhood liquor store and find dozens of bottles of craft spirits made right here in Boulder County or elsewhere in Colorado. There’s whiskey, vodka, gin, tequila, rum, liqueur and everything in between made with that famous Rocky Mountain snowmelt and, say, local juniper berries or organic wheat or corn, distilled in small or large batches, and aged in often non-descript warehouses in barrels flown in from around the world.

You might wonder when all this growth in local craft distilling happened. But if you ask Colorado Distillers Guild (CDG) President Sean Smiley, he’ll tell you distilling is just starting to take off.

“We [the CDG] are the largest distillers guild with 67 paid members, and each of our members are reporting to us that they’re not seeing any signs of slowing and business is increasing,” Smiley says.

Smiley estimates there are over 100 distillers operating in the state, though some of them haven’t gone to market yet or don’t plan to, for various reasons. He sees parallels in the craft coffee and beer movements that are encouraging for local distillers.

“Twenty-five years ago, 30 years ago, people had limited options for coffee, they’d drink Folger’s, and that was about your variety of coffee. Then this company called Starbucks come out and said, ‘We can make coffee to your particular needs,’ and as you know there are a lot of variations, you can get a latte, soy, chocolate, vanilla… It made the experience of drinking coffee individualized for every drinker.

“Then about seven years after that, everyone was drinking Coors light and Bud light. ‘Tastes great, less filling,’ right?” Smiley continues. “People started saying, ‘I don’t have to drink these flavorless lagers. I can drink an IPA or a stout or a porter that’s tailored for the type of flavor profile I like. … The same thing is happening with distilling. There’s Jack Daniels, Jim Beam, Jose Cuervo and a few other liquor brands, but we’re starting to make this option with different flavors and flavor profiles.”

So that’s the source of the growth — a vibrant craft-distilling scene gives people options to find liquor that meets their specific tastes. Smiley says his definition of craft is a “personalized experience for the consumer.”

But coffee drinkers make up a large portion of Americans as do beer drinkers, though lower for sure. Regular spirits drinkers make up an even smaller portion of the population, and the variation between spirits — and between brands within those spirit categories — might seem like there aren’t enough consumer bucks to support such a large craft distilling scene.

But, Smiley says, the numbers don’t lie — distillers are filling out their warehouses in Colorado and actively seeking growth to meet demand. Many only distribute in Colorado at the moment. Having variation to meet individual tastes is one thing — getting consumers to find the products that meet their tastes is another. Smiley says producers in Colorado are at an advantage in meeting this challenge, though, because of state laws.

“The State of Colorado is fantastic in that the licensing for our distilleries allows us to have tasting rooms attached to our distilleries, and we’re allowed two tasting rooms per distillery license. We usually have one attached to our distilleries, where people can come in and sample vodka, gin, whiskey. It becomes personal for them. ‘I love this particular distillery, because I got to meet the people making the alcohol. I saw them barrel-aging. Start to finish, I saw where it was taking place.’ When they’re looking at liquor store shelves weeks down the road, they’re going to be drawn to that particular brand.

“If we didn’t have that and we just put a bottle of booze on the shelf,” Smiley says, “people might say, ‘I don’t know, am I going to spend $50 on a whiskey I’ve never tried before?’ It might be cool for a birthday gift or whatever but they’re much more likely to buy craft if they’ve made that connection.”

One way the CDG is helping build that connection further is with the Colorado Spirits Trail, a map that guides people through 61 of the state’s distilleries to try everything from absinthe to smoked whiskey. Participants get a map, and upon each distillery visit get a stamp that they showed up at a certain place and tried the local drink. Ongoing visits earn you prizes — 10 visits gets a T-shirt, full completion enters you into the running for 40 bottles of craft spirits. Smiley says it’s often a year-long journey, though one person committed and completed the trail in only 10 days.

In many ways, it makes a lot of sense Colorado has such a strong distilling scene. In the gold rush of the mid-19th century, people with European roots — and distilling knowledge — flooded the area, and distilled spirits served a vital purpose.

“Back when we were a state that was really focused on the gold rush, the miners really needed something to help their ailments while working in the middle of the mountains for months at a time without seeing civilization,” Smiley says. “A lot of those miners came from European or Eastern American roots, areas where moonshining was prevalent. When they came into Colorado to hit the gold rush they would build some rudimentary stills from basically tin and a lot of stuff that you really wouldn’t want to make consumable alcohol with, and they would take raw materials they could get their hands on to ferment it. Whether it be grains or sugar, they would ferment and distill and that was their way of getting alcohol in their bellies after working in pretty extreme work conditions. They didn’t have Advil or Tylenol back then.”

Smiley, in fact, has modeled his own distillery, State-38 Distilling, on those early pioneers. But he also says modern distilling has roots in Colorado, too. Stranahan’s was one of the counrty’s first craft distillers (outside Kentucky) to really “boom” and it provided inspiration for other distillers with similar dreams.

“People caught on that these guys are making whiskey and selling it for $70, $80 a bottle. There must be something to this. It lit up this resurgence in distillation and craft distillation in Colorado,” Smiley says.

He adds whiskey is king in Colorado, but gin is surging in popularity at the moment. But the point of the Guild’s work, and the trail, is to get people to experience different spirits and explore the state while they’re at it.

“Let’s not go to Salida for just whitewater rafting, let’s visit the distillery. Let’s go to Fort Collins and check out the distilleries there,” Smiley says. “It’s a much larger thing. It’s not just a Bourbon trail, it’s gin, it’s absinthe, it’s aquavit, it’s vodka, it’s all these things. People seem to really be attracted to that right now. A lot of folks are on the journey exploring the state.”