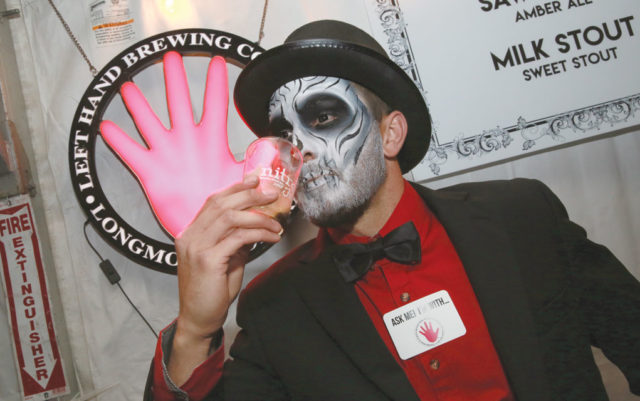 Residents of the Centennial State certainly are lucky: 300 days of sunshine, romantic spring and falls, and more beer festivals than you can shake a stick at. Some are big, some are small, but few are like Left Hand Brewing Co.’s annual celebration of nitrogenated beers: Nitro Fest.

“Our closing event is by far our sexiest event of the year,” says Left Hand’s Community and Events Manager Joshua Goldberg.

Back for a fourth year and featuring a costume contest, circus acts, music by Lotus and beer from over 40 breweries — including breweries from Japan, China and South Korea — Nitro Fest isn’t just the world’s only nitro-exclusive beer festival, it’s also one of the most creative beer fests around.

Left Hand’s relationship with nitrogenated beers goes back roughly 10 years, when they started offering their Milk Stout Nitro on draft. In 2011, Left Hand stuck that stout in a bottle, and recently they worked with the Ball Corporation to develop a widget that would allow them to can their Milk Stout Nitro.

With these innovations, Left Hand has been leading the nitro beer charge, with Nitro Fest at the nexus.

“Nitro education and nitro exposure are really where Nitro Fest shines,” Goldberg explains, pointing out that many of the breweries attending Nitro Fest don’t often infuse nitrogen into their beers.

Take Epic’s Brainless Raspberries Belgian Style Ale, which can commonly be found in bottles and on draft with the standard carbonation. Served on nitro, Brainless rounds out and softens, the sourness of the raspberry candied. Same for Liquid Mechanics’ Peanut Butter Porter; an interesting and experimental beer suddenly transforms into a full-blown dessert thanks to the nitrogen.

And it doesn’t stop at dessert; nitro turns Jim’s English Bitter from Sanitas into the perfect aperitif; 4 Noses’ Cinnamon Stout Crunch into a full-bodied, malty breakfast; and Freemont’s English Barleywine aged in Heaven Hill bourbon barrels into something to be sipped slowly beside a winter fire.

From barleywines to bitters, from Colorado to Japan, Nitro Fest is anything but the same old, same old.

“If you’re expecting 70 IPAs, Nitro Fest isn’t the right event for you,” Goldberg says. “But if you’re looking for fun, wild interpretations of nitro beers, along with this magical circus music experience, then it is worth the trip.”