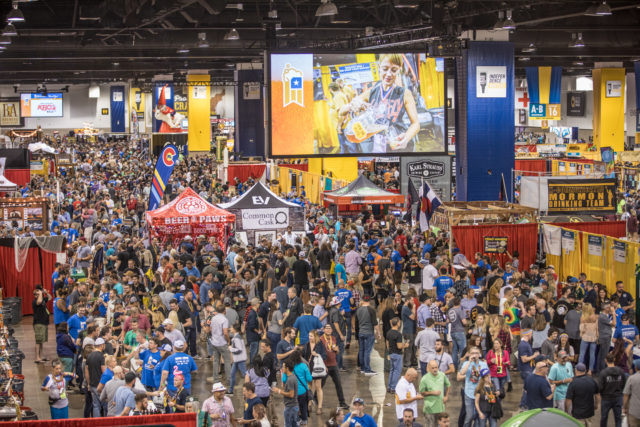 “In those days, the closest thing to a beer fest was a kegger in the woods,” Charlie Papazian says with a chuckle, reflecting 38 years later over coffee at Vic’s on Walnut.

The Great British Beer Festival (GBBF) was and is something else. First organized in 1977 by the Campaign for Real Ale (CAMRA), GBBF is both a celebration and a preservation of unfiltered, unpasteurized, cask-conditioned “real ale,” Britain’s iconic brewing tradition. For the ’81 iteration, the festival invited Papazian as a judge. His charge: sit on a three-person panel and determine the grand champion beers of England. Recounting the festival years later in Microbrewed Adventures, Papazian uses the word “awed” to describe his experience.

Following GBBF, Papazian traveled to London and reconnected with friend and British beer scribe, Michael Jackson. He talked of people relaxing, drinking traditional ales, talking about flavors and enjoying a beverage the way the brewers intended. We should do this in America, Papazian told Jackson. That’s a great idea, Charlie, Jackson responded. Only, what will you serve for beer?

Jackson had every right to be skeptical. At the time, only 44 breweries were operating in the U.S., and the number was dwindling. Regionals were either consolidating or closing up. The big three: Bud, Coors and Miller sucked all the oxygen out of the room. But there was hope: Anchor Brewing Company, Boulder Brewing Company (now Boulder Beer Company) and Sierra Nevada Brewing Company had planted the microbrewing flag. Enthusiasm for homebrewing, spurred in great part by Papazian’s efforts, foretold a coming revolution.

“By 1981, there was a well-established community, a network, of homebrewers and beer enthusiasts in Boulder and the Denver area,” Papazian says. “There were four of us who were the core group who discussed the idea of putting together a beer festival where we could celebrate what was left of American beer because there wasn’t a whole lot.”

Coincidentally, CAMRA and subsequently GBBF were founded in 1971 by four men fearing that ubiquitous bland beer would obliterate British brewing heritage. They aimed to preserve tradition and promote quality. Ten years later, four men in Boulder picked up the baton.

The first Great American Beer Festival (GABF) was held in a 5,000-square-foot ballroom inside Boulder’s Hilton Harvest House Hotel (now the Millennium Harvest House on 28th Street) on Friday, June 4, 1982. It was the centerpiece event of the fourth annual National Homebrewers and Microbrewery Conference, put on by the American Homebrewers Association, and lasted from 4:30-9:30 p.m. During those five hours, 47 signature American beers from 24 breweries were poured for 800 guests.

Ask Papazian if he had any idea that GABF would reach this potential and he’ll smile, and, with a twinkle in his eye, admit: Maybe after I’ve had two or three homebrews.

“For the first time in decades the American beer consumer is beginning to see the possibility of choice,” declared the 1982 summer issue of Zymurgy, announcing the first GABF. Neither the words “micro” nor “craft” appeared in the seven simple paragraphs outlining the festival, but choice was front and center. As was the declaration: “Every attempt has been made to conscientiously represent the most unique, special and quality beers brewed in the U.S.”

Not an easy task for Papazian and his circle. Communication between brewers was rare, and printed resources were few and far between.

Most of the breweries invited were regionals and only four — Anchor, Sierra Nevada, Boulder Brewing and River City Brewing Company — represented the emerging microbrewing scene. Of those four, only Boulder Beer and Sierra Nevada will be pouring at this year’s festival.

Tracking who’s in and who’s out through each GABF lineup provides a telling snapshot of the brewing world these past 37 years. At the first GABF, Coors debuted its Killian’s Irish Red.

It wouldn’t be the only year Samuel Adams won the Consumer Preference Poll, an award that would court a fair amount of controversy and consternation — both in how Koch attracted votes and how he marketed his victories. In 1987, Papazian and festival cofounder Daniel Bradford instituted a professional blind tasting of beers categorized by style, 12 in all, with gold, silver and bronze medals awarded. But Samuel Adams still walked away with the Consumer Preference Poll, this time for its Festival Lager.

Though the Consumer Preference Poll proved to be more a source of derision than acclaim — it was discontinued in 1990 — the official competition based on style that arose from it might be GABF’s greatest accomplishment. Its objectivity lends legitimacy to the beers awarded, and its celebration of historical and regional styles has instilled a level of creativity in brewers heretofore unseen. From the original 12, GABF’s competition has blossomed to 108 competitive categories in 2019. Over 9,300 beers from nearly 2,300 breweries will compete for medals this year.

Writing in Microbrewed Adventures, Papazian points out “some styles of beer were close to extinction before the new brewing revival in America saved them from the archival tombs.”

And this year Franconian-style rotbier, kellerbiers, märzens and witbiers will compete alongside juicy/hazy IPAs, cream ales and California common. For those attending — tickets are still available — GABF once again offers a lupulin-soaked journey across time and space.

“We have created the American Beer Ark to float above the light-lagered oceans of the world, harboring with care and passionate enthusiasm the great beer traditions of the world,” Papazian wrote in Microbrewed Adventures.

And to think, it all started with an invitation to judge the Great British Beer Festival, a celebration of tradition that many felt was slipping away. A tradition Papazian knew was equally slipping away in the U.S. What would they serve for beer?