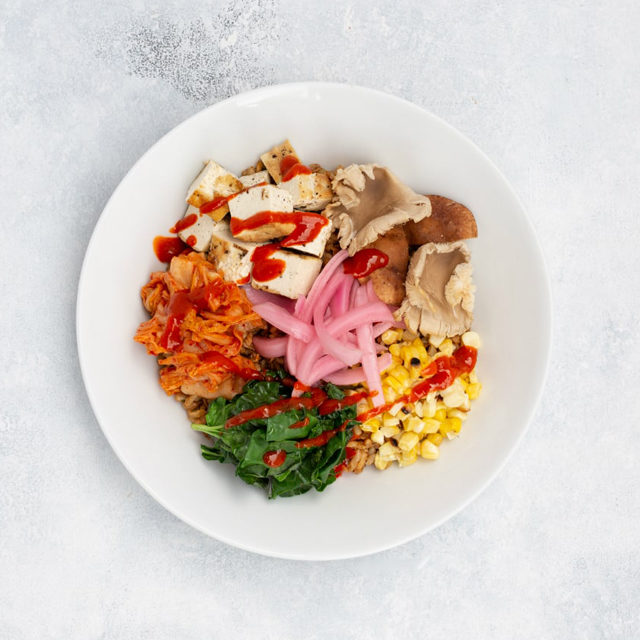 So, you’re a vegan. Or vegetarian. Or just conscious about the food you put into your body. You just got off an airplane, and it’s late, and you’re hungry. You want something quick, convenient, affordable, and most importantly, something that fits your diet. So you stop into a roadside convenience store, and your choices are, gulp, granola bars, solo bananas curiously pulled from the bunch, and Popchips.

It was because of this void of vegan, vegetarian and health-conscious grab-and-go food that Mike Fogarty launched Choice Market last year. It’s a total reimagination of the convenience store: There are plenty of fresh vegan and vegetarian options, which complement a full menu of both meat- and plant-based sandwiches, salads, flatbreads and more. But Choice also provides meal delivery, groceries, beer, and gives shelf space to local craft food makers like Rosenberg’s Bagels, Tender Belly and Corvus Coffee.

Choice’s original downtown Denver location proved to fill a need so much that it already has plans to open a second location in the Denver Housing Authority building in June, at which it will serve a mixed-income community in need of access to fresh food, and where it will train at-risk youth to work in the culinary world. A third location on Colfax will follow, with electric-vehicle charging, solar panels on the roof and a bike share terminal.

What’s exciting about Choice’s success, particularly for Boulder County vegans and vegetarians, is the company’s expected growth beyond these three initial storefronts. Fogarty says Boulder “is high on the list of expansion plans,” and, even if we don’t get a storefront within the next few years, we may get a taste of Choice through collaborations with local chefs and food vendors.

Take, for instance, Choice’s collaboration with Veganizer Denver, a plant-based food consulting agency. Together, the two will host a vegan “pop-up” event at Choice, at which Fogarty’s crew will offer an expanded vegan menu to show vegan food can indeed be convenient, satisfying and affordable.

“Historically lots of vegan substitutes have not been all that tasty, but in the last five years things have really gotten better,” Fogarty says. “That allows people who are thinking about eating vegan for whatever reason to make that transition. The Beyond Meat burger is a great example of that.”

The pop-up will feature Choice’s meatball sandwich, made with Beyond Meat, heralded for its similar taste and texture to beef despite being plant-based. It was Choice’s initial customers that encouraged Fogarty to find room for Beyond Meat menu items, and it represents a greater commitment from the establishment to meet customer demands for plant-based convenience foods.

“When we started, we had a large amount of plant-based and sustainable options, and that has grown,” Fogarty says. “Our chefs have created numerous menu items at the suggestion of customers. They often ask us about new products like Just Egg and cheese substitutions. If there is demand, we are happy to incorporate. We are constantly learning and adjusting product mix based on customer feedback.”

Choice is the result of Fogarty’s own search for healthy convenience foods. Growing up outside Philadelphia, Fogarty, like most people in Pennsylvania and New Jersey, ate plenty of grab-and-go sandwiches, soups and salads at Wawa, which consistently earns praise as the nation’s top convenience store (it won a national 2018 survey that asked tens of thousands of people to name their favorite sandwich, and has earned top awards from publications as varied as Business Insider and Saveur.)

“It was one of the first convenience stores that set an example of how convenience can be synonymous with fresh and healthy,” Fogarty says.

Combine that with a few trips to Barcelona as an adult — where Fogarty says he was wowed by small- to medium-sized convenience stores managing to serve high-quality, fresh ingredients — and there were ample models out of which to build Choice.

“I felt there was an opportunity to do something similar here in the States, and for innovation within the convenience store space,” Fogarty says.

But the benefits of a store like Choice don’t only extend to customers who choose to shop there. By virtue of offering better, more responsibly sourced food, and doing it with the convenience and affordability of a 7-Eleven, Fogarty is bringing in consumers that otherwise wouldn’t be exposed to local food and vegan and vegetarian offerings. He’s making it easy to support local food chains and sustainable agriculture; broadly, he’s making environmentally friendly dining convenient, and he’s doing it without sanctimony or pretension.

“Sustainability and shortening the supply chain was core to our business model, everything from sourcing locally as much as possible to utilizing compostable packaging,” Fogarty says.

To add to the convenicnce, Choice offers delivery within 45 minutes, and will become one of the first companies in Colorado to offer delivery of prepared foods, groceries and full-strength beer in one transaction.

Offering good food conveniently is not without its challenges, however. With Choice’s growth, it’ll be an ongoing battle to maintain quality and low prices.

“There is always the balance between price and quality,” Fogarty says. “The cleaner the product the higher the price. That can be a challenge so we are always looking for ways to thread that needle.”

The vegan pop-up at Choice Market (1770 Broadway, Denver) is Feb. 2 from 10 a.m. to 1 p.m. Tickets are $5, and food offerings include jackfruit torta sandwiches, beet Reubens and tofu bibimbap.